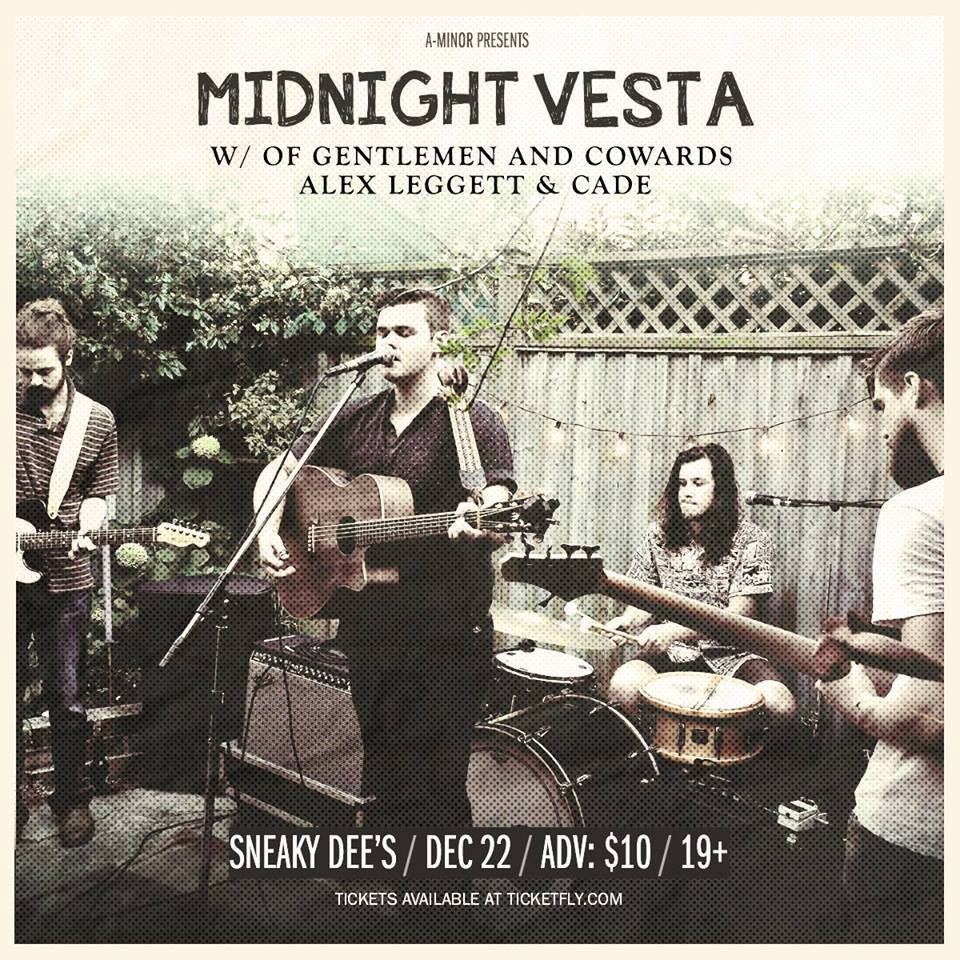 Toronto based folk rock quartet, Midnight Vesta, have just completed a mini fall tour and are ready to hit the stage again in their hometown. Canadian Beats got the chance to chat frontman Peter Jarvis in anticipation of their upcoming show on December 22nd at Sneaky Dee’s in Toronto. We discuss new music, favourite tunes, and what fans can expect from their new music.

To begin, could you please introduce yourselves to our readers who may not be too familiar with your music?

Hey, I’m Pete from Midnight Vesta, a four-piece out of Toronto.  The music is definitely a mix of folk, country, and rock.  The current line-up is myself (Peter Jarvis) on acoustic guitar and lead vocals, Collin Carnegie on lead guitar and backing vocals, Rob Patterson on drums and backing vocals, and Paul Phelan on the bass.

Since the release of your last EP The Sleight of Hand, you’ve been busy playing a number of live shows including a recent mini fall tour. What can someone who has yet to see you expect from your live performances?

We’ve definitely grown into a more driving and energetic live band than we used to be.  The songs themselves have more layers in terms of instrumentation and you definitely get a wall of sound coming at you in the crowd.

The mini fall tour was great.  You really only start to get a sense of how your songs should be played once you road test them.  It’s crucial to play the same tunes for a few nights in a row to get a feel for the ebb and flow of a set.  The audience will tell us how it’s going.  It’s up to us to clock it and re-work things that aren’t working, and build on things that are.  It’s a constant work in progress, but it’s fun to find ways to make old songs sound and feel new again.

The band has undergone some changes with new members and a new sound. How do these changes affect your songwriting and what can fans expect from the band’s new sound?

Midnight Vesta has always been a bit transient in terms of members since its beginning, so it has never really been a surprise when someone has to step away.  Everyone that has been a part of the band over the years is where they should be – doing great things, which is neat to see.  It’s happened at different times and for different reasons, but we regroup, reflect, and write.  There is a lot of new subject matter to touch on, which is exciting as a songwriter.

With an influx of different members come new ideas and a new set of skills so sonically there is going to be a shift.  Having lead guitar as opposed to a banjo plucking along immediately signifies a change in the musical landscape. There is also electric bass instead of upright, and the drums are much more featured than they used to be.  It’s no longer a folk group being fleshed out with a rhythm section. It’s full band, full stop.

You have a show coming up in Toronto with Of Gentleman and Cowards, Alex Leggett, and CADE. Will we hear any new music at this show?

We still play a couple of the tunes from the EP every show, but the majority of our set lists are new, unreleased material.

Is a new album or EP currently in the works?

Over the past year we’ve recorded and are in the midst of mixing a 9 track album to be released early 2017.  We don’t have a specific date as of yet, but by the spring something will be coming out.

Canadian Beats is all about Canadian music, who are your current favourite Canadian artists?

I’ve been listening to a lot of Donavan Woods and Kathleen Edwards over the last little while.  Two great Canadian singer-songwriters that have a unique way of turning a phrase – it’s a story every time.

Here at Canadian Beats, we like to include a portion of questions that may help your fans learn something new about you.

I saw Mrs. Brightside, a Killers cover band, the other night.  They are all super talented musicians in their own right and it was nice to see them let loose on some music we grew up with.  It’s easy to get wrapped up in your own projects, so it’s important to have those nights as a player and as an audience member where all it really comes down to playing good music with your pals.

What is your current favourite go-to song?

Anything by Dawes.  He recently released another great album, but you can’t go wrong with any of his current or previous work.  Someone Will has a particularly nice shift at the end, a silver lining of sorts.

I recently picked up Apple Music on my phone – a game changer, but also cuts into the number of purchases I’ve made.  I did pick up a used album of Paul Simon’s Still Crazy After All These Years.  The title track and “50 Ways To Leave Your Lover” never get old, even if the cover photo of a moustachioed Paul is getting a little long in the tooth.

Thank you and get ready.  From the first handful of friends that would come out and see us play an evening of covers, to the people that discover our band through a new live show or on the internet – Thank you.  We’ve had a few changes along the way but it feels like we’ve only just begun to hit our stride.