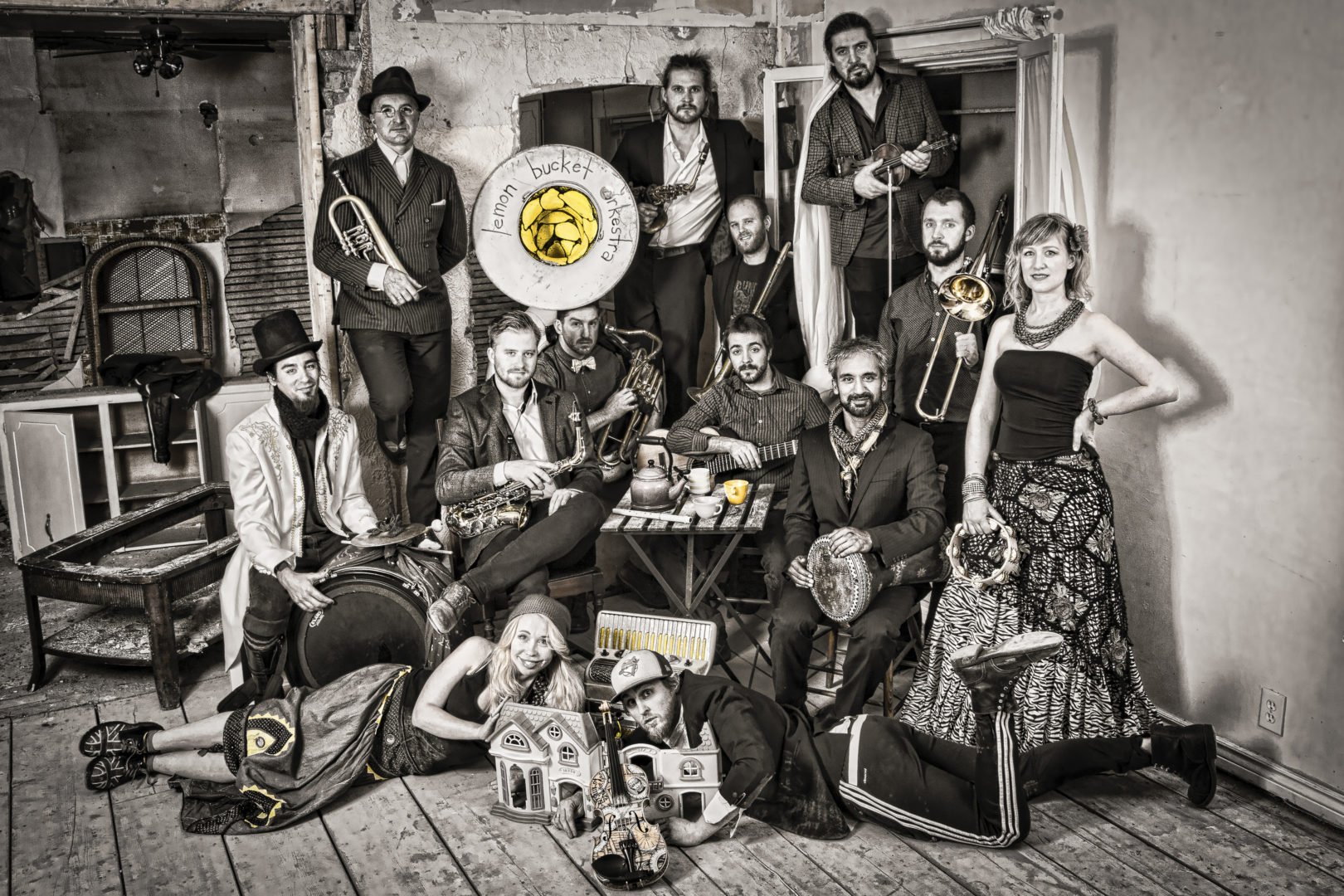 Toronto, ON based band, The Lemon Bucket Orkestra had a huge year including an extensive national tour, and it’s not over yet. On New Year’s Eve, they will be ringing in 2017 at the Opera House, if you’re in the area, this is definitely something you want to check out! We had the chance to ask them a few questions in our newest segment of “Five Questions With”!

I’m Mark Marczyk. We’re the Lemon Bucket Orkestra, Toronto’s own guerrilla-folk party-punks. There’s 12 of us, which is the smallest the band’s been in years. We’ve recorded 3 albums and we’re two time Juno losers. But we were named World Music Group of the Year once at the Canadain Folk Music Awards and our guerrilla folk opera, Counting Sheep, about the 2014 Ukrainian Revolution won awards at the Edinburgh Fringe from the Scotsman and Amnesty International. We’ll be touring that most of next year together with releasing a new full-length LBO record. Actually a record. A real one. Vinyl. I think we’ll sound great on Vinyl.

I guess our whole thing is to re-imagine Eastern European folk music. We play traditional music HARD and FAST and we try to unleash the spirit of every melody, beat or lyric. And when we do, we celebrate. And when we don’t, we celebrate. It’s a party that often goes off the rails and you’re invited to try to hang on.

We write together. Someone will bring in a tune they like and then we’ll argue over what the right chords are. And then we’ll finally find some chords we like and we’ll not be able to agree on voicings. And then the various elements of the rhythm section will be working against each other and the melody instruments will be ornaments different notes. And that’s take a couple of months of years to resolve (or else we’ll just learn to live with it). And only after going into the studio and solo-ing the accordion track will we remember we had an accordion in the band and that hey, it sounds pretty nice what she’s doing. So it’s a collaborative process.

New Year’s Eve at the Opera House on Queen East in Toronto. It’s going to be our last show in the city for a while– we’ve just spend the better part of the past two months in studio recording a new album after a tumultuous year of touring with LBO and with Counting Sheep.

Out shows are immersive and meant to inspire you to feel and emote more completely and together with your loved ones and strangers alike. They’re meant to bring us together. So, for example, we’ve planned a special moment for the strike of midnight this year: we’ve posted the lyrics for a hasidic nign (spiritual song) on our website and will ask our audience to join us in sending out a call for peace into the universe as the last thing we do in 2016 and the first thing we do in 2017.

That and it’s just a leave-everything-on-the-floor party.

I kind of look at our whole set as one long song and we even arranged our new album that way… For us, music is about the experience you share with people, not about one particular song or moment. Each song grants you access to a different feeling or thought and it’s how we share those feelings and thoughts that is the best part of music.

But, ok, if i’m not being all philosophical– Moorka. It’s the title track off our most recent album, a Russian prison ballad about a snitch who eventually gets what’s coming to her. Our version is complete sacrilege, indulgence, and defiance, a slap in the face, a punch in the gut, a gun to the head, and hands in the air, an open appropriation of a destructive culture that at once says “enough!” and “is that all you got?!”

I like A Tribe Called Red. And Boogat. Scratch Bastid is good too. And I love Gord Downie. And Cris Derksen. And Measha Brueggergosman. Lots of good artists in Canada.