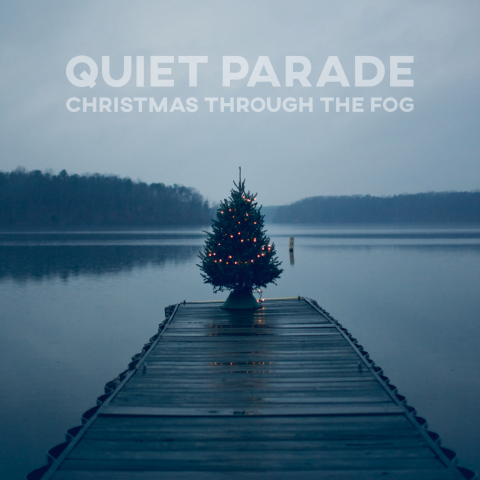 Halifax, Nova Scotia indie rock group, Quiet Parade, have released Christmas Through The Fog, the band’s debut Christmas EP.  Of the four tracks, three are covers, along with one original piece from Quiet Parade.

The album opens with “Christmas (Baby Please Come Home)”, originally performed by Darlene Love.  The track opens the album with a song, that while familiar, is based in the sonic textures associated with Quiet Parade.  This blend of familiarity and newness is refreshing and demonstrates the band’s ability to take pop Christmas classics and turn them into something which sits nicely alongside the rest of their work.  Among the other covers are “The Christmas Song”, originally by The Raveonettes, and features Dance Movie, as well as the traditional Christian hymn, “O Come O Come Emmanuel”, which is, without a doubt the best track on the album.  “O Come O Come Emmanuel” is truly transformed from a religious hymn into a highly modern and rhythmic song which, once again, blends well with the style of Quiet Parade.

The only original song, “Heavy Winter”, closes the EP and introduces a very distinct feel to the album with its odd time signature, subtle but rich harmonies, and intertwining guitar lines.  “Heavy Winter” however, feels less like a Christmas song and more of a song about the Canadian winter, allowing for the band to perform it in a set of their other original music, however it certainly shifts the tone and cheery vibe present in the previous three songs.  It’s a good song, but it doesn’t fit.

All in all, Christmas Through The Fog is a unique EP as this may be one of the first cases in which an up and coming band took the time, energy, and funds to put together a seasonal release.  Quiet Parade’s takes on older Christmas classics is excellently done, but the shortness of the EP leaves a longing feeling for more.  That being said, Christmas Through The Fog will make for a great stocking stuffer for fans of Quiet Parade and fans of the indie rock genre.