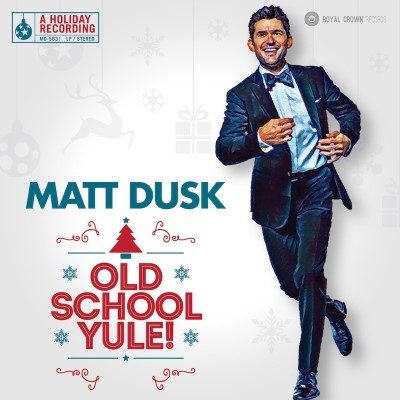 Matt Dusk instantly became Canadian jazz music royalty when his debut album, Two Shots earned him a certified gold album upon its release in 2004. For the past decade, Dusk has been touring the globe, recording quality studio albums, and entertaining loyal fans non-stop. In November 2004, Dusk released the holiday inspired EP, Peace on Earth. Dusk has since carried on his Christmas spirit with countless tours and performances centred around the holiday season. Dusk is finally showing off his charming and charismatic vocals once again with his full-length holiday album, Old School Yule! Now available at most major music retailers, Old School Yule! is a complete homage to some of the best Christmas’ songs known to music.

Released in both standard and deluxe edition, Old School Yule! is a track-by-track walk down a holiday musical and magical memory lane. From the first few chimes of “Happy Holiday” to the final note of “Do You Hear What I Hear?” the album is pure holiday joy, and easily fits into any collection of Christmas tunes. Keeping a great balance between both the traditional classic holiday sounds, and fresh and unique arrangements of the Christmas songs we have come to know and love, Dusk does not disappoint with Old School Yule!

Enlisting the help of fellow Canadian artists, Dusk invited some of the industry’s best vocalists to accompany him on some beloved duets. Toronto’s own Sophia Perlman (Santa Claus Is Coming To Town), Emma-Lee (Baby Its Cold Outside), and Barbra Lica (Let It Snow!) join Dusk and lend their vocal skills to Old School Yule! creating harmonies and luscious duets. As alumni of the St. Michael’s Choir School, Dusk is also joined by their current roster of choir members to create an astounding version of “Do You Hear What I Hear?” as well as acknowledgement of his eleven years spent as a member of the choir.

From Bing Crosby to Nat King Cole, Dusk dives into the world of Christmas music and simply pulls out the best of the best. From the cozy sounds of some of Irving Berlin’s biggest hits (Happy Holiday, White Christmas, and I’ve Got My Love To Keep Me Warm) to the absolutely iconic Bob Wells and Mel Tormé tune “The Christmas Song,” Dusk has gift wrapped something special and musical for everyone on this album.

With retro inspirations and Dusk’s smooth and powerful vocals, Old School Yule! is one swinging performance after another. Backed by over a hundred talented artists and musicians, Dusk ensured that Old School Yule! maintained the highest calibre of production quality that his fans have come to enjoy and expect from his musical work. Old School Yule! consistently maintains the integrity of each song, and allows Dusk to show off his personality with each high quality track. Dusk knows exactly what he is doing as he navigates you through years of Christmas music, and effortlessly revives the musical spirt of Christmas with each note on Old School Yule! Whether you need some songs while trimming the tree, are looking for some great party tunes, or simply want to enjoy the sounds of the holiday season, Old School Yule! has a little musical something for everyone.

Kicking off a busy season with tour dates spread out across Canada, Dusk has stops scheduled in most major cities between Saskatchewan and Quebec. Have some fun, spread some holiday cheer, and join Dusk while he hits the road to bring Old School Yule! directly to you.