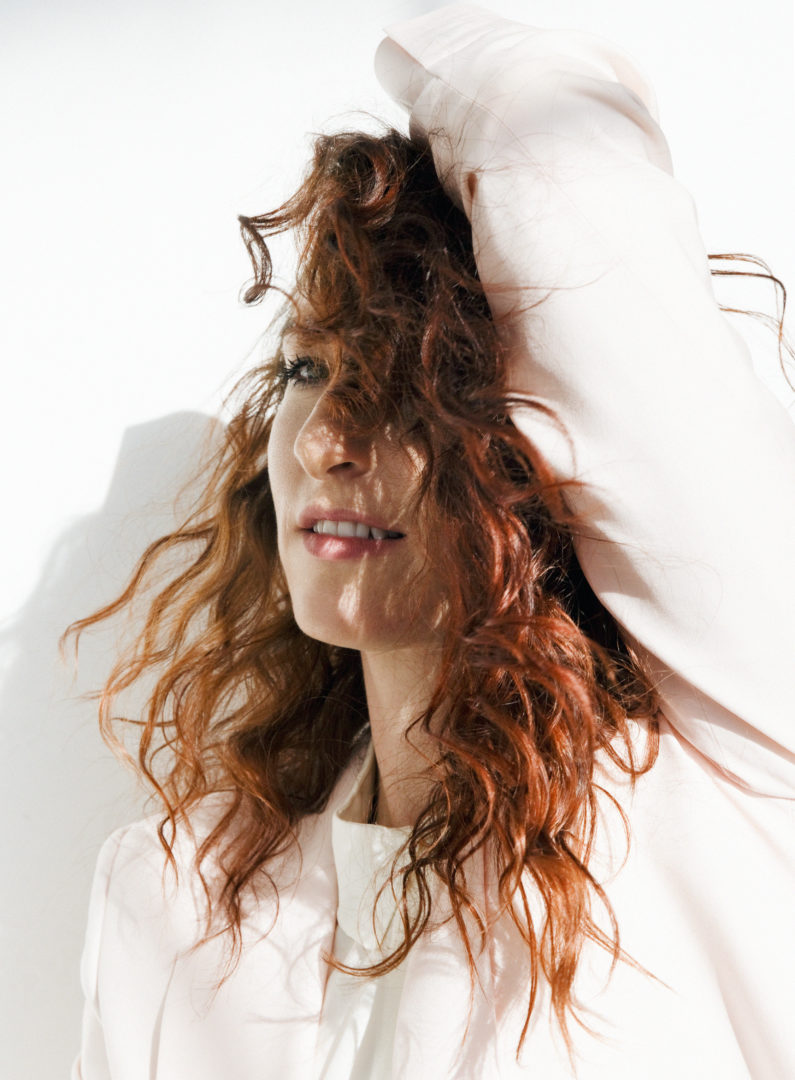 Hannah Georgas is sharing the video for her new single ‘Evelyn’, the latest to be lifted from her critically acclaimed album For Evelyn, produced by Holy Fuck’s Graham Walsh. Directed by Sammy Rawal (The New Pornographers, Metric), the striking video funded by MuchFACT premiered via Noisey-Vice this week and follows close on the heels of Hannah’s recent sold-out London, UK headline show as part of The Great Escape 2017’s FIRST FIFTY 3 day run of gigs in East London. For Evelyn is available now via Dine Alone Records.
Speaking about the treatment – filmed at Toronto’s TIFF Lightbox, home to the Toronto International Film Festival – Rawal says; “I kept envisioning that specific rooftop location of the TIFF Lightbox in my head.  I loved how graphic and unconventional it was…perched up on top of the city.  I knew it would be a perfect visual balance for the type of performance video I imagined.  It’s minimal design and neutral grey colour would offset the beat-driven edit, dance sequences, and Hannah’s wardrobe perfectly.  I really wanted to play with pattern, repetition, looping, and scale with
this video.  For me, it almost feels like this army of Hannah clones assembling high above the city in the clouds, and marching confidently forward across an urban landscape.”
Named after Hannah’s 98-year-old grandmother, For Evelyn was produced just outside of Toronto by Graham Walsh (Holy Fuck), mixed by Nicolas Vernhes (The War on Drugs, Animal Collective, Dirty Projectors, etc) and features collaborations with Ryan Guldemond (Mother Mother) and Andy Shauf. Walsh was also at the helm for Hannah’s critically acclaimed self-titled release of 2013, which put her on the Polaris Music Prize longlist.
For Evelyn has been enjoying widespread acclaim since its release in June including NOW Magazine (4/5), Exclaim! Magazine (8/10), Q Magazine (8/10), Boston Globe, NPR Music and more. Since her debut in 2009, Georgas has released two full-length albums (This is Good (2010) and Hannah Georgas (2012)), toured alongside Sara Bareilles, Kathleen Edwards and City and Colour, has had her music featured on HBO’s hit show, Girls. She has won numerous awards and racked up multiple nominations, including four JUNO nods, for everything from Best New Artist to Songwriter of the Year. Her most recent self-titled album received widespread critical praise, including notice at NPR Music, Mojo, the Vancouver Weekly and The Huffington Post, which called her “phenomenal.” For more information, visit http://www.hannahgeorgas.com/.
HANNAH GEORGAS UPCOMING TOUR DATES
Dec 01 – London, ON @ Music Hall **
Dec 02 – Hamilton, ON @ Melrose Church **
Dec 03 – Guelph, ON @ Mitchel Hall **
Dec 07 – Toronto, ON @ Mod Club
Dec 15 – St. John’s, NL @ St. John’s Convention Centre %
Dec 16 – St. John’s, NL @ St. John’s Convention Centre %
Jan 27 – Ottawa, ON @ National Arts Centre