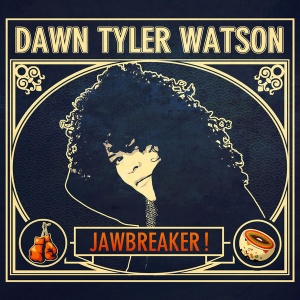 Montreal based, Dawn Tyler Watson is known for her eclectic mix of Jazz, Rock, Soul and Blues, as well as for her outstanding work. She has received three Canadian Maple Blues Awards, nine Quebec Lys Blues Awards and a Screaming Jay Hawkins Award. During her career, she has played with many musicians including Jeff Healy, Koko Tyler and Cyndi Lauper.

This solo album reflects her command of Jazz, Blues and Soul. Jawbreaker starts with a rockin’ blues tune, then flows into a R&B track and then takes off into a Jazz song. A fun jazzy tune is “Smoked Meat” – YES it is about that cured delight. One of the tunes on this album, which is her fourth release, is a sweet version of Bob Dylan’s “Forever Young”.

Dawn Tyler Watson has been called Montreal’s Queen of the Blues, and when you listen to this album, I’m sure you will agree that the title is well earned.