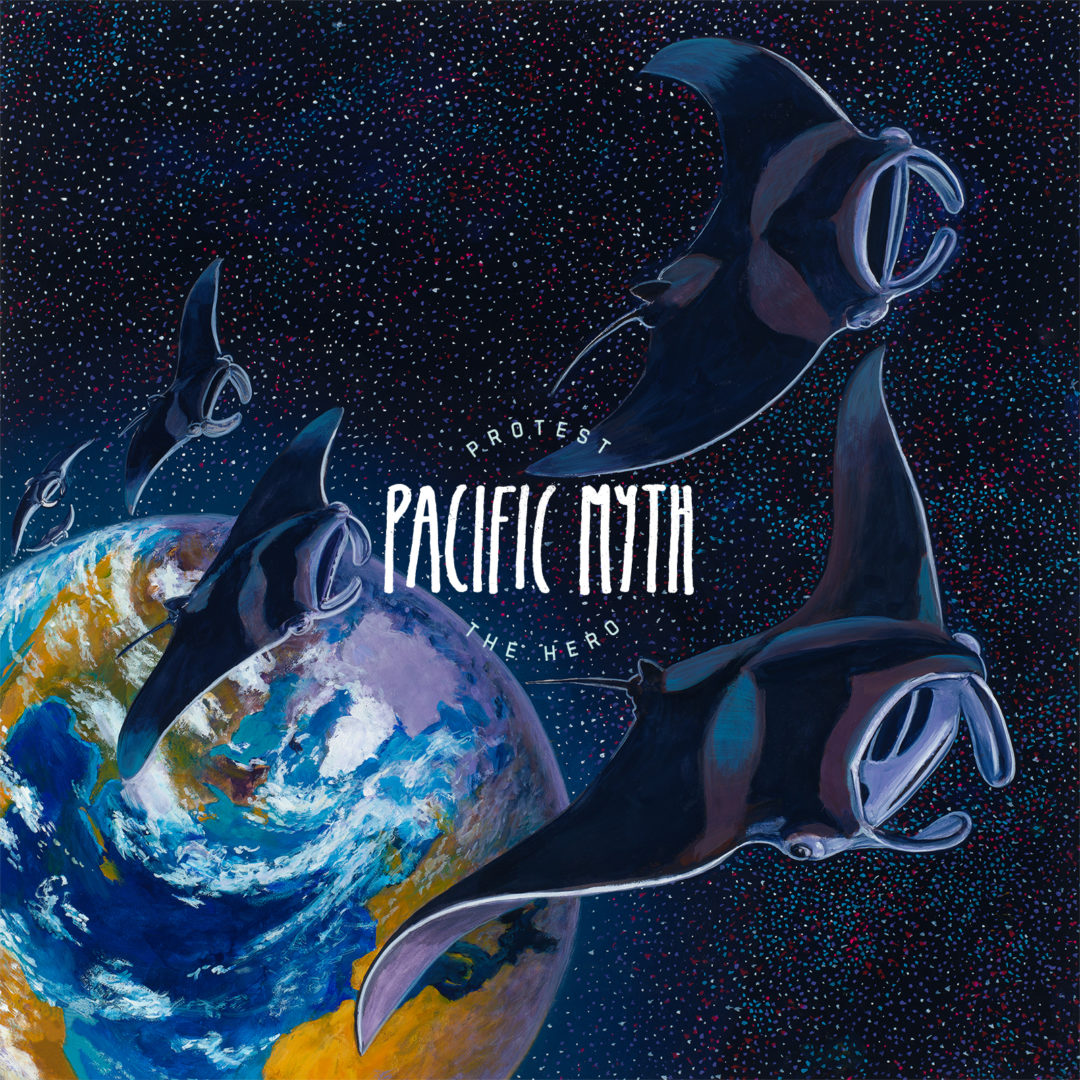 Progressive metal pioneers, Protest The Hero, have returned with Pacific Myth, the band’s fifth album, and their first since the release of Volition in 2013.  Pacific Myth was released as a part of Protest The Hero’s subscription platform, consisting of songs which have been exclusively distributed through this means in the last year.  For those who did not subscribe, this is the first time that these songs will be open to the public, collected on one album.  Pacific Myth is also the first record to feature Cam McLellan- a former touring member of the band- on the bass.

Staying true to the themes of ocean based mythology as seen in both the title and the album artwork of this record and the individual singles released in the past- which includes a multitude of illustrations of giant sharks, a half-camel-half-fish in flight, and stingrays floating across space – the albums opening track, “Tidal” opens with the gentle sound of crashing waves.  The tranquillity is quickly disrupted by the unrelenting and sudden explosion sound of the band’s array of syncopated and meter shifting pulses.  Across the six songs of Pacific Myth, the music continues to blast out of my speakers at a pace of intensity equal to, or greater than, “Tidal”.  This never letting up pulse of the album makes it a certain winner among long-time fans of Protest The Hero, as well has highly appealing to newer audiences.

The musicianship present throughout all members of Protest The Hero is nothing to be minimalized or brushed off.  Their ability to play through these songs smoothly as they shift in time signatures, incorporate polyrhythms, and change pluses is remarkably.  The fact that each musician can then grow past playing smoothly to a level of near masterful on their respective instrument, and do so as a collective unit, is worthy of the utmost praise and respect.  Much like their past material, Pacific Myth brings exactly that to an incredible degree.  “Harbinger”, while the slowest tempo on the album, stands out as one of the best tracks, which sees vocalist Rody Walker switch between growling screams and power melodies at the top of his vocal register.  Behind him, Luke Hoskin and Tim Millar move the track forward with a number of unison lines which are, as expected, jaw dropping, and even include a guitar solo which breaks away from the near constant shredding they often do to deliver a far more melodic approach, giving the song a very welcomed element of space and intensity.  All the while, Mike Leradi pushes and pulls the music back and forth with his polyrhythmic drumming, and even has an amazing drum solo squeezed between building guitar runs.

The closing track, “Caravan”, takes all that Protest The Hero has built up in the past five songs, and propels in forward in a colossal explosion of a conclusion.  They certainly chose to close what was already an excellent record with what is, without a doubt, the best track on Pacific Myth.  Similar to the serene imagery conjured upon hearing the washing tide at the very start of “Tidal”, “Carvan” resolves following what can be described as a volatile song into something quite peaceful.  The song builds up into what feels like a series of revelations, following a highly simple rhythmic pulse and guitar solo, as it decrescendos until it is inaudible with the help of a rich string arrangement.  In many ways, this is the beast of the Pacific returning to the waters which it emerged from, having completed whatever it had to do.  Pacific Myth, while not new to the bands subscribers, brings their singles to life by putting them together in a collected manner.  These already great songs, when listened to from front to back, make for a truly thrilling and excellent album, one which will surely be absolutely killer in a live setting.