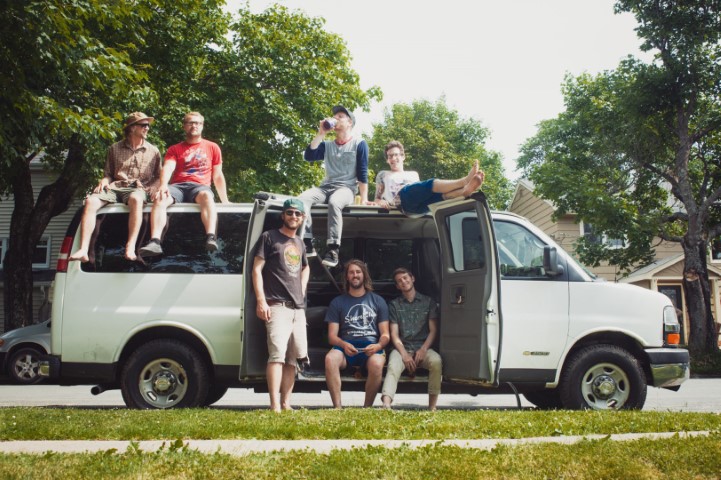 Are you ready to read? You’re not going to want to miss out on this, we are happy to present an interview with Halifax, NS reggae  band, Dub Kartel! The band recently released their new self-titled album, and now we have the opportunity to learn more about them! Also, be sure to check out their single, “Island Redux” below:

First off, please introduce yourselves to our readers?

Hey there Canadian Beats! We’re a reggae and dancehall collective called Dub Kartel and we hail from Halifax NS.

We met in our childhood and have been playing music together under different names since junior high school. After we graduated high school we went our separate ways to pursue different things and ended up all moving to Halifax in 2011 and started jamming together again. Before anyone realized we had a name a logo and some gigs booked. We were blessed with support from our city and ended up landing a residency in Halifax’s legendary Seahorse tavern where we still play on a regular basis. We’re a group of friends first and a band second and that allows us to keep things very relaxed and friendly and I think that shows in the music and live shows.

How did you come up with the name Dub Kartel?

We picked the name during a brain storm session at one of our early jam sessions. It ended up on the poster for our first gig and it stuck!

You recently released a new self-titled album. How has the response been so far?

The energy at all the shows had been noticeably different. We had a lot of fans that only ever heard our music live that now can listen to it whenever they want. It’s made the “sing along” tunes much more fun also!

What can you tell us about the writing process behind the album?

We write in a very unstructured way, we take ideas from the jam space and try them out live and see how it feels and how people respond to certain things and then adjust to get it just right before we take a track to the studio. Basically we just jam it out.

The first single, “Island Redux” is great, what made you choose this track as the debut single?

Well apart from it being one of our favourite songs on the album we had a plan to shoot an epic music video out on an island with boats, a beer sponsor and about 50 extras, but the weather turned on a bunch of times and we had to keep rescheduling. Now we’re into the winter and are trying to figure out a new plan. That’s what happens when you live in Canada I suppose!

Is there a certain song on the album, other than the single that you think will catch listener’s attention?

Burnt Roots & Reggae Coup are both really catchy and have a great organic sound. They both feature Jah’Mila Smith from Jamaica, whose vocals make the tracks shine.

You have a few tour dates coming up in Halifax, Toronto & Ottawa, when can fans in the rest of Canada expect tour dates?

We’re currently booking our spring tour that will take us coast to coast! stay tuned for updates.

If someone has yet to see you perform live, what can be expected from your show?

Our shows are a celebration. We throw out more energy than a punk band and play some very danceable music, so it makes for a great party for all ages.

Canadian Beats is all about Canadian music, so please tell us who your current favourite Canadian bands/ artists?

BadBadNotGood are definitely one of our favourites right now and we’ve been touring with After Funk a lot lately. Both in constant rotation in the van.

What is your favourite outdoor activity in the autumn months?

We’re a very active bunch and love extreme sports. In the fall our favourite activities are: hiking, smoking weed, skateboarding, surfing and riding in the van.

Badger’s real name is actually not Badger, but David.

To all our fans out there we love you and thank you for your support. To new fans, we hope to see you at our upcoming shows!