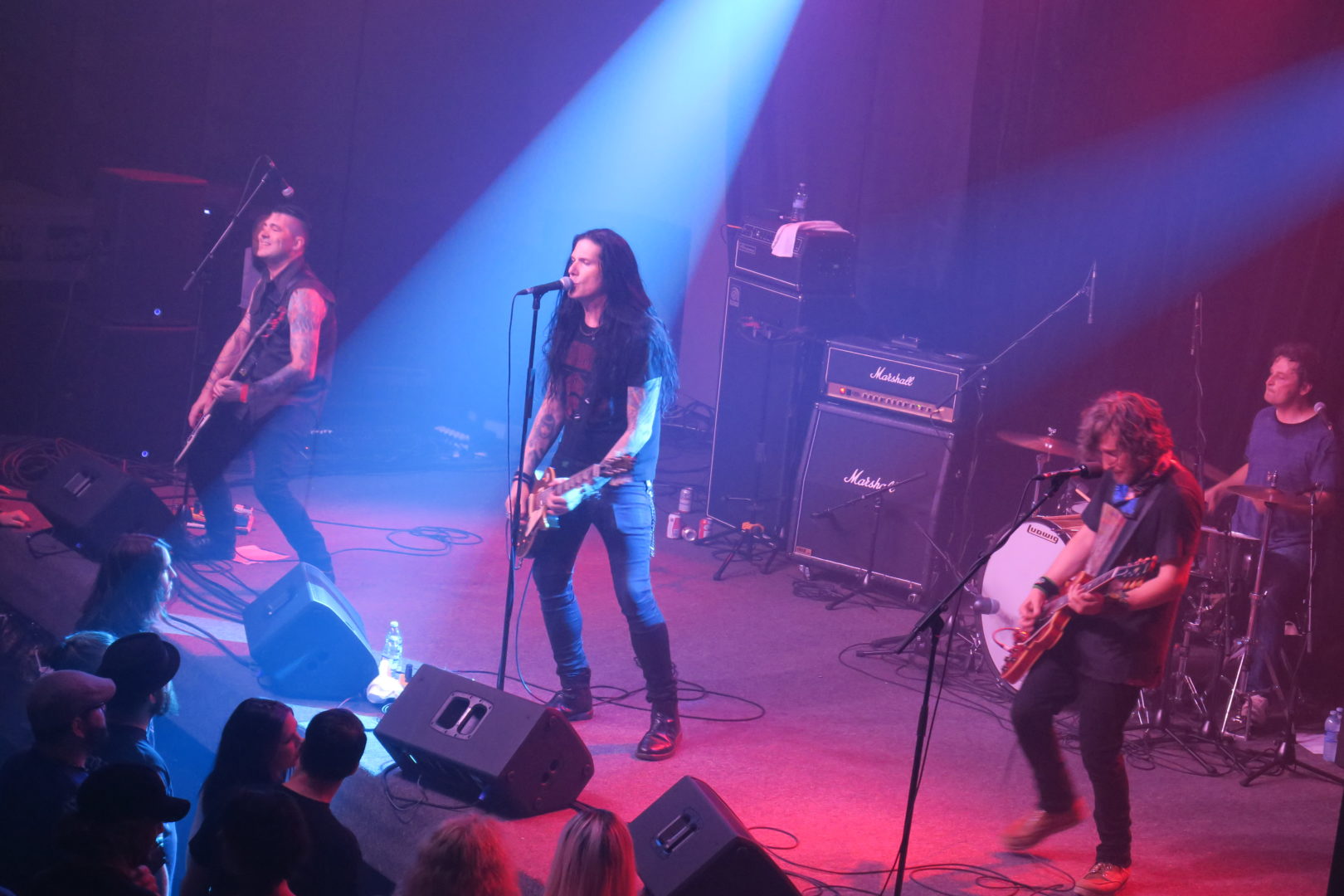 Hailing from Lanigan and Regina, Saskatchewan, Age of Electric is a rock group formed by Ryan Dahle, Kurt Dahle, Todd Kern, and John Kerns.  The group parted ways in 1998, but re-grouped in 2015.  I had the opportunity to conduct an email interview with Todd Kerns of Age of Electric.  Continue reading to find out more about the band.

How did Age of Electric form?

Kurt Dahle and I were friends and played together in bands for years waiting for our younger brothers to get out of high school. Once they did we put the band together.

Whom or what have been your inspirations for your music?

I think there’s the usual inspirations like The Beatles and Stones that makes everyone pick up a guitar but growing up in Saskatchewan the weather kept one indoors so much that it was either play guitar or go mad. Most of us did both.

The AOE live shows have always been pretty spontaneous. There is a loose plan in place that can ebb and flow depending on surroundings or circumstance. Kinda like loud jazz with way less notes.

In 1998, you played your last show with Our Lady Peace.  How did it feel?  What led to your decision to pursue other interests?

We had been together a long time. I think it was just time for us to spend some time apart. That time apart should never have been as long as it was.

What were up to during your hiatus?

I moved to the US 10 years ago and started working with Slash. Ryan has Limblifter and The Mounties plus a wealth of production and mixing credits. Kurt played with The New Pornographers for years. John played with Robin Black and Sound And Fury. He was the first of us to ever tour Europe.

What led you to reuniting?

Ryan and I had been getting together and working on songs for years so there was new material that both John and Kurt became a part of.

We had received a number of calls over the years to play and then one just stuck. That was in August of 2015. In Calgary.

If you could go back in time to when you first formed, is there any advice you would tell yourself?

I think I would have told us to listen to one another more. To be there for one another. That no matter what might come our way to remain a team. A family. We have certainly reached that place today.

Most of all I would tell myself to enjoy myself. It all goes so fast.

Comparing 1989 and 2016, what have been the most significant differences that you have experienced in being in the music scene?

It’s night and day but I believe that good music is good music. Obviously selling music is a different animal than it was but all we ever wanted to do was make music and play for people. We still do. Goal met!

You are performing at Adelaid Hall in Toronto on November 25, featuring your original lineup, what can you tell us about this?

It’s our first time playing Toronto as The Age Of Electric in 18 years. To us getting to Toronto was a big deal the first time we did. It was and is the center of the Canadian music industry.

To get to revisit all the people who had welcome us all those years ago means more than I can say.

You will be releasing a four song EP in February, tell us a bit about the writing process behind the EP.

Ryan and I would get together now and then over the years and come up with stuff as we always did and probably always will. Eventually we brought in Kurt and John to flesh things out. It was astounding how the songs immediately sounded like AOE

Can fans expect any more tour dates to be added?

We are re-releasing our 1997 album Make A Pest A Pet in February as a 20th anniversary deluxe package including unreleased material. Plus an EP of brand new material. This should most assuredly have us on the road in the first quarter of 2017.

At Canadian Beats, we like to include fun questions to help fans get to know a bit more about you.

What led you to pursuing a music career?

My lack of skill with sports and my obsession with The Beatles, KISS and The Who left me with no choice but pursue music. The fact that it became a career is still a shock to me.

In Saskatchewan I was obsessed with local heroes Streetheart and the Queen City Kids. Sloan is a favorite of mine.

Loverboy. 1982 Get Lucky Tour at Saskatoon’s Centennial Auditorium. Some new kid named Bryan Adams was opening. Doesn’t get much more Canadian than that! I was, quite literally, a child at the time.

I have been very fortunate to travel the world for a living. At the moment home with my family is a rare treat I never get enough of.

If pressed I always acquiesce to New York City. There is an unquantifiable energy there that always grabs me. I’ve always wanted to attend a taping of SNL.

I can only say thank you to any and all who have been around all these years. I consider myself a very lucky man to be able to do what I love to do day in and day out and that is only possible with the people that have been a part of it this whole time. Thank you