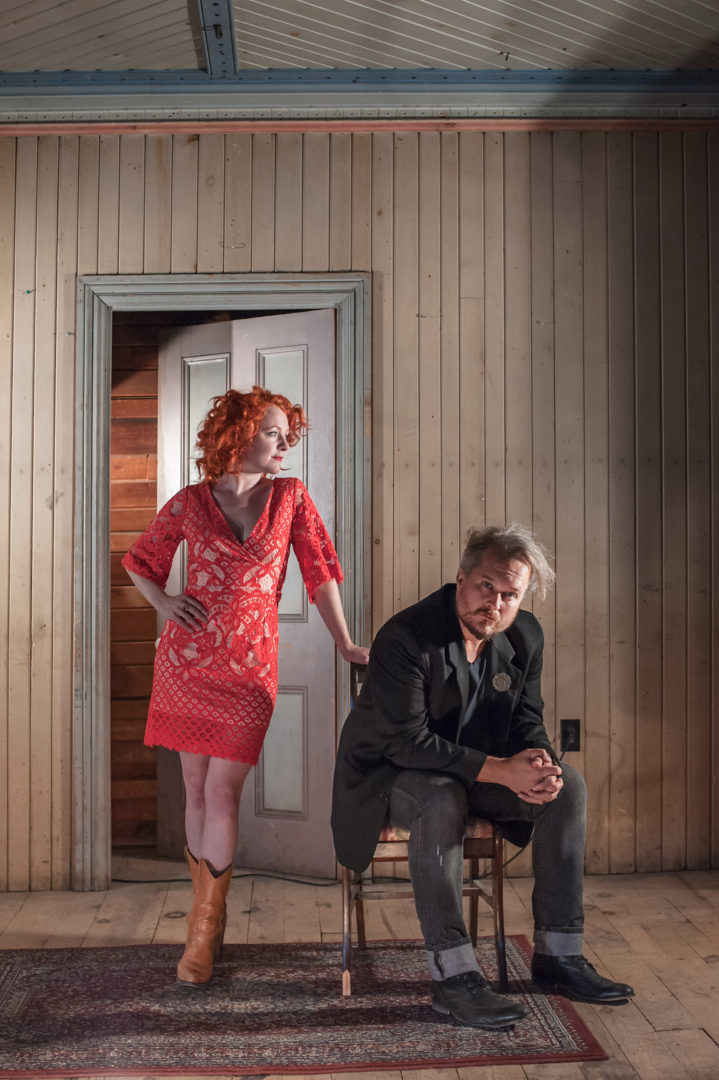 I recently had the chance to ask Andrew Penner & Miranda Mulholland, who make up Harrow Fair a few questions about their music, their album and much more!

Would you please introduce yourself to our readers and explain a bit about what led you both to be working together at this point?

Andrew Penner and Miranda Mulholland are HARROW FAIR.  We met in Toronto in 2008 and have always crossed paths on tour in other bands we play in (Andrew – Sunparlour Players, Miranda – Great Lake Swimmers, Belle Star).

How would you describe your sound for someone who has never heard your music?

You both came from other projects before joining forces, how much influence have those experience contributed to your work together?

Tons.  We both have a lot of road miles and albums under our belts.  I think it has taught us both to keep flexible and to always try and surprise ourselves.

You started writing together while working in Soulpepper Theatre Company, is that where you first met?

We got to know each other better through theatre shows, but we met in Toronto years ago.  But only in the last year and a half have we started to really collaborate.

With some shows coming up can you describe what people can expect from your live performances? Will that theatre background impact your stage performance?

I think so.  Our songs have a theatrical feel to them and our stage show definitely follows that lead.

Your debut LP, Call to Arms came out on October 21, what can you tell us about the album?

How would you say your sound has changed since your 7-inch?

We’ve played a lot since our 7-inch came out so I think we’ve just kept focusing our sound with all the dates we’ve played.  In the same show our sound goes from very small and acoustic to really big and amplified.  We make a lot of sound for a duo.

Though definitely in a heavy country vein, your sound seems to draw on a lot of genres, what Canadian artists have influenced you the most?

MM here – Both of us have had so many different musical influences. Speaking for myself, I would say the music of a lot of my friends and peers has found its way in; Justin Rutledge’s beautiful poetry, NQ Arbuckle’s grit and sweetness, and Jim Cuddy’s melodies.

What are you most looking forward to with your upcoming live shows?

Andrew: we just wanna play a ton and share this sound.  I love singing with Miranda.  I think it’s something real special.

Miranda:  I’ve never gotten to sound quite so edgy and rock and roll before. Andrew allows me to do that. It is such a release and a high. I absolutely love it.

Lastly, because I’m a massive geek and this is kind of my thing… The zombie apocalypse is upon us; together you get to pick 5 Canadian musicians for your zombie survival team. Who do you pick and why?

MM – Hmm…..Well, I’d say Caroline Brooks from the Good Lovelies because everyone knows Moms are the toughest people ever. I will also suggest Royal Wood. He seems into farming these days and we would need that after we won.
I am picking Corb Lund because the guy can shoot, ride horses, drink whiskey and let’s face it, he’s pretty dishy. If I HAD to procreate with him to save the human race in the aftermath, I would fall on that sword.

Andrew – I’d probably want Neil Young on board.  as having an older fella in a zombie situation is always a must….telling old stories…a politically minded person for the “how did we get here?!” and “how will we rebuild?!” conversations which are great in a zombie situation.  Also, I think he’d be gold for cussing and challenging the young bucks to do the right thing…etc.  .And mainly, I think I could outrun him.  So that’s a big plus for me.  Miranda would be good aswell as she’s real strong in a canoe in case water comes into play.