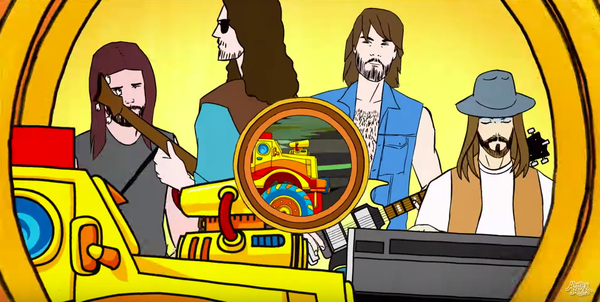 Monster Truck are proud to unveil the official music video for, “For The People”, a politically empowering, yet non-partisan track from their recent album, Sittin’ Heavy. Click HERE to watch the animated companion video for the classic roots rock-inspired song advocating power to the people; see above for a screenshot from the video.

“We wanted the video to capture a certain vibe,” comments lead vocalist/bassist Jon Harvey. “The song was intended to be a pseudo-protest and very roots rock. The ‘70s animation seems to speak to that.  Besides, nothing is cooler than hand-drawn animation. The illustrators and animators executed it perfectly.” Directed by Toronto’s Kyle Griblin of Six01 Studios, the video for “For The People” is illustrated by Brett Lamb, Leslie Supnet and Eric Kim and is animated by David Mayzis, Les Solis and Greg Zajac.

Monster Truck have also just announced that they will support fellow Canadian rockers Billy Talent on their upcoming coast-to-coast Canadian winter tour. The 12-date arena tour kicks off on February 16, 2017 in Abbotsford, BC and wraps up in Halifax, NS on March 6, 2017. Tickets for the tour are on sale now. For a list of all upcoming Canadian tour dates and the band’s recently announced UK headlining tour, please see below. For all additional tour dates, please visit: http://ilovemonstertruck.com/home/

Earlier this year, Monster Truck toured extensively across Canada and the United States in support of their critically praised sophomore LP, Sittin’ Heavy, with dates that included major rock festivals Welcome To Rockville, Carolina Rebellion, Northern Invasion and Rock On The Range, as well as a combination of headline shows (including two sold-out shows in Toronto at The Phoenix Concert Theatre) and support dates with Rob Zombie and Volbeat in the US.

Sittin’ Heavy, which debuted at #3 on the Top 200 Canadian Soundscan chart, is available to purchase via the band’s webstore, Dine Alone webstore and iTunes. In just three weeks, the album’s first single, “Don’t Tell Me How to Live”, catapulted into the Top 5 at Canadian Rock radio and after a number of features during prominent sports events has become a sports arena favourite. The band’s second radio single “For The People” also landed in the Top 5 at Canadian Rock radio and was the #1 most added track at Active Rock in Canada in its first week. Monster Truck’s latest single and established hockey anthem “The Enforcer” was recently used in an HBO promotional spot for the Rock & Roll Hall of Fame 2016 and garnered attention from legendary hockey commentator Don Cherry when the track was featured in the opening montage and second intermission of Hockey Night in Canada last season.

Hamilton, Ontario’s prodigious sons Monster Truck are one of the biggest groundswell stories in Canadian rock in the past few years, with two crushing #1 singles at Canadian Rock radio, a 2013 Juno Award for “Breakthrough Artist of the Year” and a 2014 nomination for “Rock Album of the Year” under their belt.

Monster Truck’s unabashed dedication to creating killer riffs and putting every ounce of themselves into their show night after night has created quite an impression not only with fans across the globe, but iconic rock bands as well. The band has been championed by the likes of Slash, Alice in Chain’s Mike Inez and Twisted Sister frontman Dee Snider. Monster Truck has toured extensively in Canada, the U.S, Europe and the UK, alongside such iconic acts as Alice in Chains, Slash, Rob Zombie, Nickelback, Deep Purple, ZZ Top, Buckcherry, Alter Bridge, Kid Rock, The Sheepdogs, and VISTA CHINO (Kyuss) and has performed at a number of popular festivals including Download Festival, Bonnaroo, Welcome to Rockville, Rock on the Range and Edgefest.