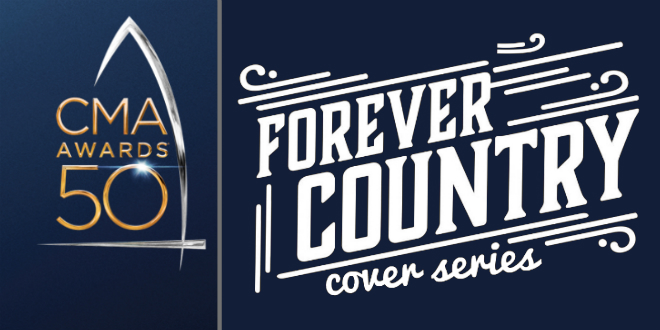 The Country Music Association proudly celebrated the 50th Annual CMA Awards with the release of a star studded medley, paying tribute to some of country music’s best and brightest stars. The three song medley has since inspired the #ForeverCountryCovers series which has been blowing up the internet with some of today’s biggest artists covering legendary hits. The #ForeverCountryCovers trend has expanded north of Nashville and some of Canada’s biggest stars are joining in as well. Leading up until the awards night of November 2nd, covers were released in anticipation of country music’s biggest night. Here is a recap of some of our favorites recorded by our own Canadian country music superstars.

Brett Kissel lent his musical talents to cover Miranda Lambert’s hit, “The House That Built Me.” Originally pitched to Blake Shelton, it was Lambert who recorded the song and turned it into a two time platinum selling number one hit. Kissel creates an amazing acoustic version of this song and if it happens to surface as a track on his next album, we won’t be complaining.

Check out Brett’s version of “The House That Built Me.”

Tim Hicks threw his hat in as well and took his chances with Kenny Roger’s mega career hit “The Gambler.” Roger’s watched the song soar to the number one spot shortly after its release in late 1978 and has since played the song to thousands of loyal fans all over the word for the past 38 years. Hicks takes a classic take on this iconic song. Hicks knows that when it comes to these legendary hits, the fans mean business and he delivers a solid version.

Check out Tim’s version of “The Gambler.”

Carolyn Dawn Johnson can do no wrong. Johnson tackled and scored a touchdown with her version of Martina McBride’s “Independence Day.” Written by Gretchen Peters, McBride released the song in 1994 and it earned McBride two Grammys and the Academy of Country Music Awards Video of the Year. Johnson absolutely blows you away with her version. In her defense Johnson watched McBride perform this song night after night on several of her tours by joining McBride’s musical team throughout the years. Plus Johnson just happens to be a really talented artist. So there is that too.

Johnny Reid is one of Canada’s most beloved country music artists. Hands down, fans go crazy for everything Reid sings. Reid went completely country classic by performing “Always on My Mind.” Earning Willie Nelson a Grammy in 1982, Nelson’s version is arguably one of the most recognized in country music. When a song has been recorded by everyone from Elvis to Loretta Lynn, you know its good music. Ried takes the classic song and has all the elements of everything we have come to love and adore about the song. Reid’s performance is heartfelt and soulful.

Check out Johnny’s version of “Always on My Mind.”

Check out The Wilkinsons’ version of “Go Rest High on That Mountain.”

Chad Brownlee includes his take on Lee Brice’s “I Drive Your Truck.” Brice earned himself a number one hit and a platinum selling single with “I Drive Your Truck” in 2013. Brownlee does this song a ton of justice. Just Brownlee and a guitar, he pulls the song off with ease and great vocal control.

Check out Chad’s version of “I Drive Your Truck.”

Jess Moskaluke decided to tackle on one of Little Big Town’s biggest and most recent major hits, “Girl Crush.” The three times platinum selling single peaked off at number one and crossed many paths, and earned the group multiple awards. Maybe we expected a little more from a three time Canadian Country Music Association award winning “Female Artist of the Year,” but bless her heart, I think she tried. Maybe?

Lindsay Ell is one of the hardest working female artists in Canadian country music. As a solo act, and backing up artists like Carrie Underwood with her awesome guitar skills in her free time alongside fellow Canadian Lindi Ortega, Ell took some time to share her version of Deana Carter’s “Strawberry Wine.” Looking absolutely beautiful, Ell created a raw and emotional version of “Strawberry Wine” that is spot on to the days when Carter’s original recording flooded our radios.

George Canyon has long celebrated his love for country music throughout his career. Through the successful releases of his own renditions of country “classics,” Canyon has lent his voice time and again to bring new life to some of our most beloved country tunes. Originally recorded for his 2012 album Classics II, Canyon strums up another stellar version of “Rhinestone Cowboy” to add his name to the Forever Country Covers series.

We are proud of our Canadian’s and their versions of some of the most iconic songs in country music. Beyond boarders, these songs have all been heard a time or two on Canadian radio. Proving that we are more than just a country full of Tim Horton’s coffee shops and hockey players, the best in Canadian country music also show that we have talent and respect for everything country. Here’s to another 50 years of country music!