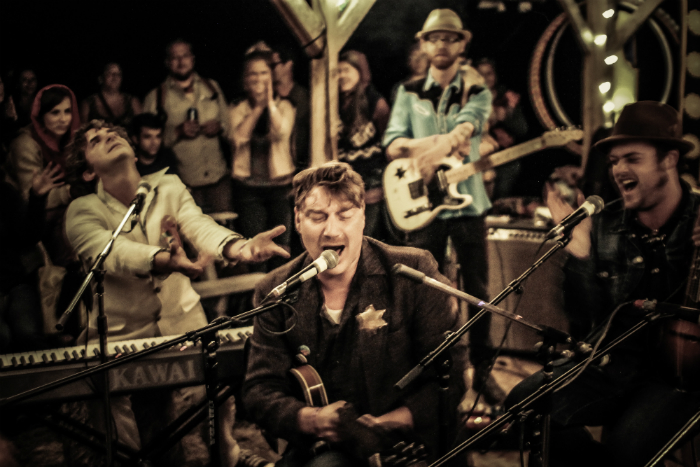 The Silver Hearts are a group based in Peterborough, ON. I had the chance to conduct Five Questions With two of the members in advance of the release of their first album in 10 years, Golden Favourites which is being released on November 4, 2016 via Mudtown Records.

We are a group that started out of a weekly open stage in Peterborough Ontario Canada, in January of 2000. The core of the band is three friends who’ve been with the band all along. We’ve been coast to coast, playing folk festivals and theatres, weddings and parties, and journeyed to Japan to be onstage at the Arabaki Rock Festival in 2010. We’ve enjoyed opening up for The Sadies, Blue Rodeo, Buffy Ste Marie, and done shows with Ron Sexsmith and Serena Ryder, to name a few.

Our music is, and always will be based around the sound of the piano. It is the driving force behind our rhythm section and the primary instrument in our compositions. There are many horns and electrified and acoustic instruments as well in our lineup. Our original songs have a strange yet familiar ring to them, touching on elements of psychedelia, spaghetti Western soundtracks, New Orleans street processions and local folk music.

We’ve got a new album coming out in November of this year. We’ll be playing in Owen Sound, Toronto and Peterborough, and planning to play Ottawa and Kingston and hopefully Montreal. I would suggest that if you want to have an amazing time, and a whole new experience of live music, come see us.

If I had to select the best tune to represent the sound of our band, it’d be  Letter to the Editor, on our new album. Written by Charlie Glasspool, it has all the key ingredients of a Silver Hearts tune. Plus trombone and guitar solos!!

My name is Charlie Glasspool. I helped found the Hearts in the late 20th century with Tiny Davis and Wyatt Burton. I am also a music educator and have directed the music program at Macphail Memorial School in Flesherton, Ontario for 6 years. I received the Prime Minister’s Award for Excellence in Education in 2014 and our school bands have been recognized at the regional, provincial and national level.

I grew up taking RCM Piano…”classical” music, and the Romantic period especially has made an indelible impact on my musical self. I fancied myself a bit of a writer in university and was accepted to Stan Dragland’s famous Creative Writing Workshop at UWO. I love the unconventional, the eccentric, the poetic, the lyrical…give me weird over normal any day. I guess my songwriting style is about creating little worlds, little snapshots, little riddles to be solved. I have a lot to learn about songwriting clearly.

A song I love on the album is our rendition of “In The Pines” by Leadbelly. It is such a deeply haunted tune. Listen to it and feel the bite of winter in the air, the merciless regrets that torment you, the one that got away, the horrible things we are capable of…sorry. I’m answering this question on Halloween!