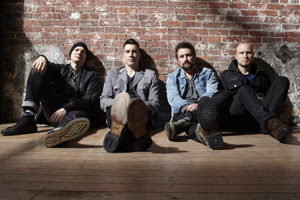 Multi-platinum selling rock giants Theory of a Deadman are set to hit the road, taking their unplugged acoustic tour across Canada for eleven dates, kicking off in Edmonton on October 28th. Fans can catch the JUNO Award winning band headlining theatres throughout Alberta, the Maritimes and Ontario, reprising the intimate and interactive setting of last year’s hugely successful UNPLUGGED 15 tour.

For more than a decade, Theory of a Deadman has been among the most distinctive and popular bands in hard rock, combining frank, earnest lyricism and extraordinary melodies with massive power and electrifying dynamics. With singer/songwriter Tyler Connolly at the helm, the Vancouver-based band has earned a fervent fan following as well as a long line of multi-format hits, among them the No. 1 hit “No Surprise”.

The 2014 release of their fifth studio album “Savages“ saw the rock outfit expand and take a new approach to songwriting, exploring the darker and more emotional side of rock, resulting in an album that is both introspective and impassioned. “Savages” showcases a sonic resurgence with Connolly’s intense, distinctive vocals and Brenner’s commanding but melodic guitar instrumentals, taking the band back to their gritty roots.

With a slew of No. 1 hits and accolades spanning 16 years, there is no mistaking that Theory of a Deadman have left an indelible imprint on fans and critics alike, with relatable songs and live shows that leave audiences wanting more.