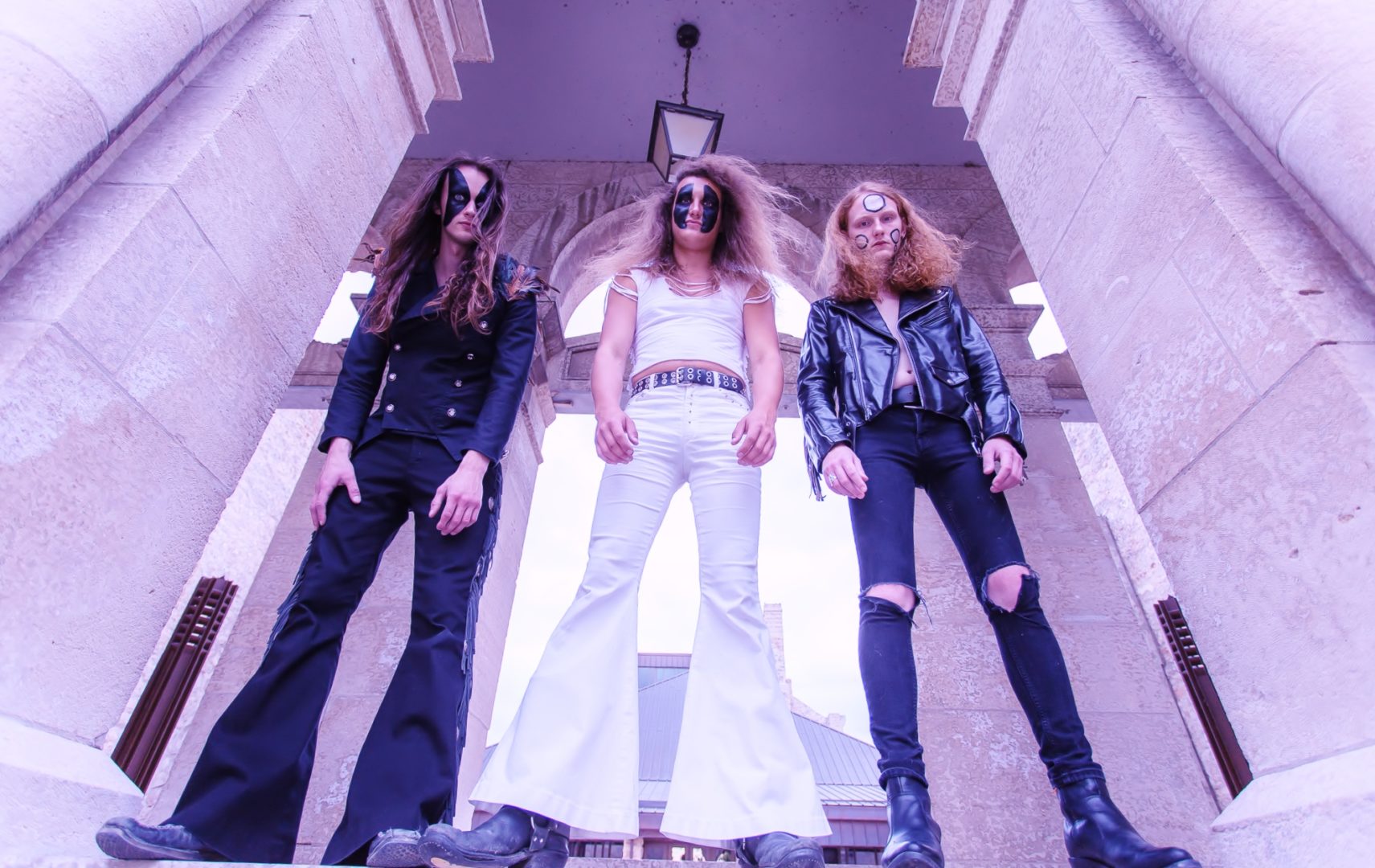 Winnipeg trio Moon Tan recently released a new 7″ on September 23rd and kicked off a Canadian tour on October 6th. They took the time out of their busy schedule to talk about the record and tour and what’s to come so check out that below.

Can you introduce yourself and your music to the readers who may not be familiar with Moon Tan?

My name is Nick Knock and I am the drummer of Moon Tan. We describe our music as “intergalactic space freak rock and roll”. It’s like if Rush and Led Zeppelin had a love child who grew up watching space B-movies and Alice Cooper concerts.

You recent released a new 7″, what was the writing and recording process like?

The writing of the songs took place over a span of about a year. We rent a jam space in small town close to our houses in Manitoba named Lockport and basically meet up as much as we can and throw musical shapes at each other. Sometimes it’s just pieces of a song like a bass melody or a rhythm and other times someone will bring in something more complete like a whole verse and chorus idea. We all have a lot of say in the writing process and that way these songs are something that we can all really get behind as individuals, which makes the group stronger. As for the recording process we were lucky enough to partner with J Riley Hill of Mortfell Productions who really helped materialize the sounds and concepts we had in our heads. We did the tracking of drums, bass, and guitar in one day at Private Ear studios in Winnipeg and then Adrian (singer, bassist) finished vocals at J Rileys home studio.

Were you working towards a 7″ or did you write the songs and just know you had to get them out there?

We knew we were going to release something this year, whether it be a full length or something smaller and circumstantially it made more sense to do the 7″ this year. We are working towards a bigger release in the near future but that’s as much as I’ll divulge at the present.

You’re a few dates into your Canadian tour right now, how have the shows been so far? Any highlights?

The shows have been great! This is the most extensive tour we’ve ever done of the eastern side of Canada and in amount of dates booked in total so there has been a lot of exciting firsts this trip. My two biggest highlights so far would probably be our show at House of Targ in Ottawa which is seriously one of the coolest venues in all of our great nation and our time in Quebec City because the show was rad and we had a fan show us around the town the next day which we don’t get a lot of opportunities to do a lot of the time.

Brady and Nick have been rehearsing together since they were 15 so you’re probably pretty comfortable playing together, how do you keep the creative energy flowing to keep things new and exciting?

I think as individuals we are always discovering new music and getting better at our instruments so when we get together to jam we push each other’s limits musically and creatively.

In 5 years we hope to be doing this full time and playing hundreds of shows a year to people all over the world! As for content we hope to have created music that is honest, empowering, and makes people feel good.

Rick Rubin of course! It would actually be really cool to do a writing session with Jimmy Page as well.

My favourite Canadian artists would have to be Rush (could you tell?), Metz, Stompin’ Tom Connors, Celine Dion, and Johnny 2 Fingers & The Deformities.