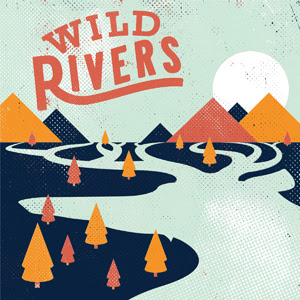 Indie folk group Wild Rivers have announced they will be hitting the road in support of their self-titled debut album, which was released independently this past April to considerable fanfare at a sold-out hometown show at Toronto’s Adelaide Hall. With influences drawn from such iconic music legends as James Taylor and Fleetwood Mac, Wild Rivers captivates with the magnetism that only the chemistry of a male/female duo can produce. The tour will see the four piece make stops across Ontario and Quebec, including Toronto, Montreal, Ottawa, Oshawa, London and Cambridge in addition to dates in Boston, MA and New York, NY, with more dates to be announced in the coming weeks.

Born out of Devan Glover (vocals) and Khalid Yassein’s (vocals, guitar) eponymous Kingston-based duo “Devan & Khalid”, Wild Rivers took on a life of its own with the addition of Ben Labenski (drums) and Andrew Oliver (bass, guitar), carving out a name as one of Canada’s most exciting young acts. Melding a classic feel with their own refreshing spin, Wild Rivers manages to honour those that leave them inspired while producing songs that are uniquely meaningful, with contemporary pop appeal. Drawing comparisons to such modern acts as The Civil Wars and Houndmouth, Wild Rivers are forging a path through the Canadian folk scene and beyond, consistently packing venues and attaining new and loyal fans along the way.