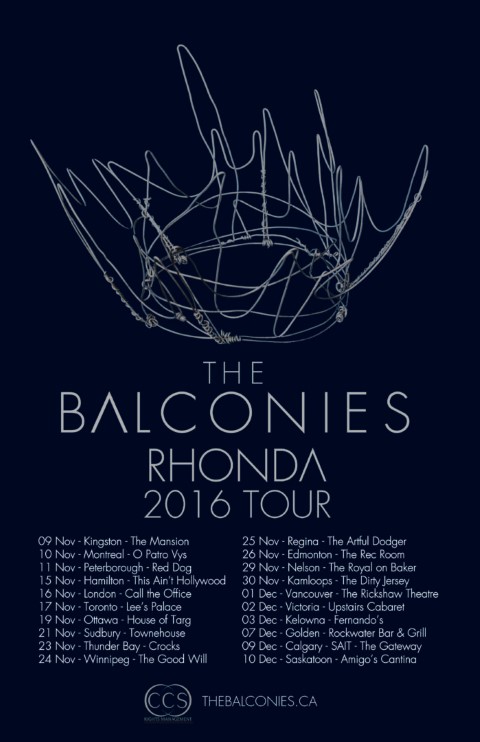 The release of the new album from Toronto-based alt-pop group, The Balconies, is here and the band is thrilled to announce that they will be taking their stunning live show on the road this fall. Their brand new, self-produced album, Rhonda, dropped on October 14 and the band will celebrate the release with a run of tour dates across Canada through November and December.

The Balconies’ live show is truly a force to be reckoned with. Captivating stage presence, incredible musicianship, and powerhouse vocals from frontwoman Jacquie Neville, all help transport the audience into the world of Rhonda. The 2016 tour will take them from Ontario to BC, kicking off on November 9th in Kingston. Full details can be found below.

In preview of the release, the group shared the music videos for singles War and Money Money, along with an eerily intriguing lyric video for the title track. Teaming up with director, Sasha Avramov, on both of the official music videos, the group worked closely with friends and artists they admire, professing that they have created a creative family over the past two years, including Creative Director, Daniela Navas, who does all of their photography and graphic/creative design, and Daniela Jaramillo, a Toronto-based visual artist who created the wire crown that the villain wears in both the War and Money Money videos. LA-based Choreographer, Kelsey Oluk, has also worked with the band for many years, and helped to create the dynamic and unique choreography throughout Money Money.

The Balconies – Jacquie Neville and Liam Jaeger – formed in 2008. Their undeniably kinetic performance style, meshing diverse influences like Yeah Yeah Yeahs, Duran Duran, and New Order, has seen the band on stages across Canada, the US, and Europe. After maintaining a tireless international touring schedule, they took a break to work on the new material that would form Rhonda. The album explores a myriad of musical and thematic material about its fictional heroine title character. A story of hope, self-discovery, and the struggle for authenticity in a saturated world will resonate with both music fans and artists alike. Order Rhonda here.