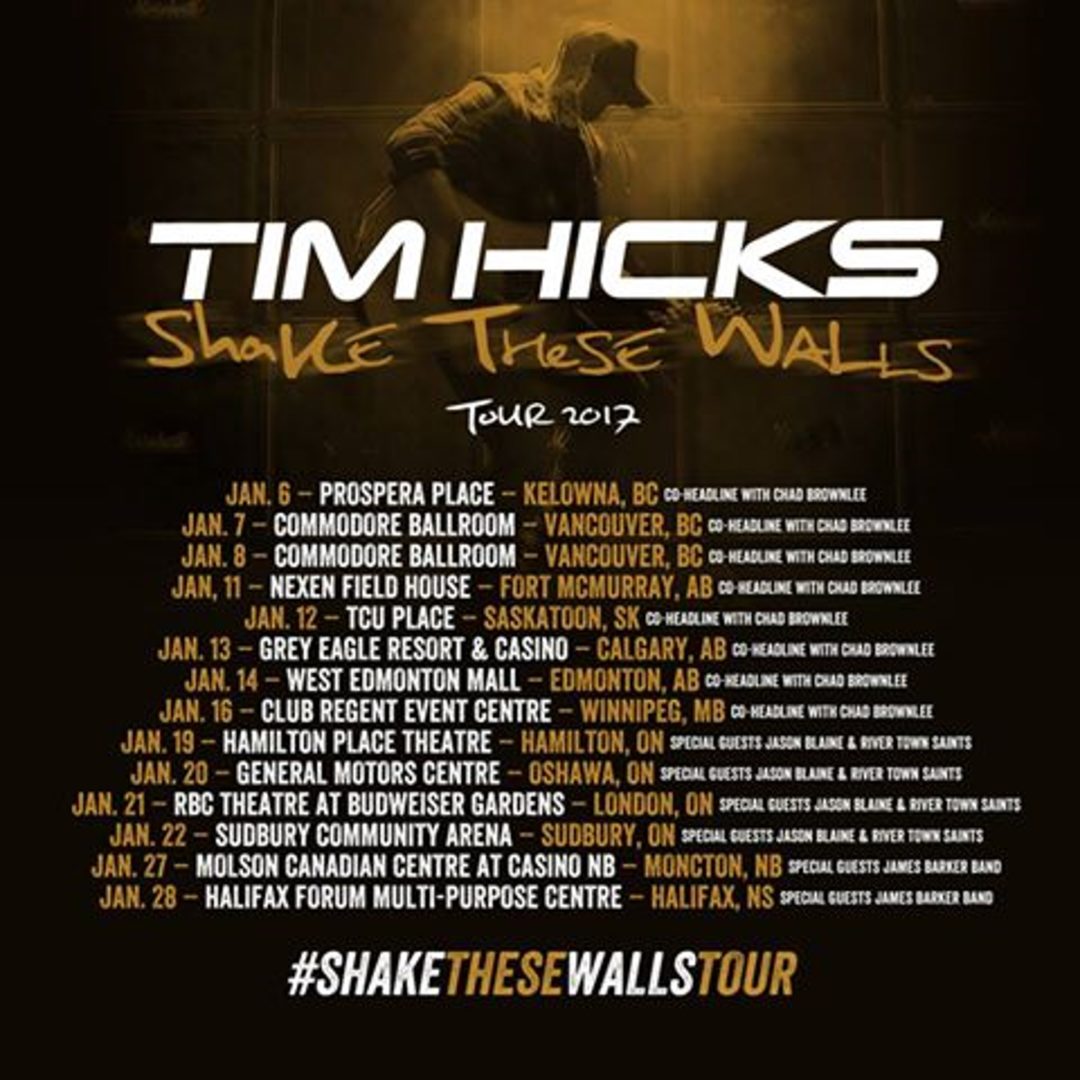 JUNO Award nominee and CCMA Award winner Tim Hicks announced today that he will hit the road in 2017 for the “Shake These Walls” Tour. The highly praised, five-time GOLD certified artist, who has built one of country music’s most loyal audiences show by show, and song by song, confirmed that he will visit some of his favourite “Stompin’ Grounds” in major markets across the country including: Vancouver, Calgary, Edmonton, Winnipeg, Hamilton, London and Halifax, with capacity crowds expected along the way. Featuring co-headliner Chad Brownlee in western Canada where the “Shake These Walls Tour” collides with Brownlee’s “Hearts On Fire Tour”, and special guests Jason Blaine, River Town Saints and James Barker Band for select dates in the east, the 2017 Shake These Walls Tour kicks off in Kelowna, BC on January 6th and continues across the country until the end of the month.

Fan pre-sale for all shows will begin on Tuesday, October 18th at 10:00 a.m. local time, followed by tickets on sale to the general public on Thursday, October 20th at 10:00 a.m. local time. A limited number of VIP ticket packages are available for each date and include a meet and greet and photo with Hicks, access to a pre-show acoustic performance, commemorative VIP laminate and more. Visit www.TimHicksMusic.com/tour for full details.

The follow-up to 2014’s CCMA Award nominated sophomore album 5:01/5:01+, “Shake These Walls” is a combination of slick party-fueled anthems, blue collar country and free-spirited romance, shaping the evolution of an artist the Toronto Star named “one to watch” and one who remains intent on leading the pace within an evolving musical landscape. Co-written by Hicks, “Shake These Walls” debuted as the #1 selling Canadian Country Album on the Nielsen SoundScan Top Country Albums Chart, bringing the acclaimed country artist front and centre for his proverbial close-up.

With over 378,000 total digital singles sold to date, Hicks is currently celebrating his highest charting hit with “Stompin’ Ground” which was the #1 most added song at Canadian Country Radio upon release and topped the digital singles chart for one week as the best-selling Canadian country song.

Hicks recently headlined the Pepsi Live Main Stage at the Scotiabank World Cup of Hockey Fan Village, which also saw appearances from The Killers, Sam Roberts Band and the legendary Lenny Kravitz. After wrapping a summer filled with blockbuster festival and headlining appearances, including his 4th coveted slot at the Boots and Hearts Music Festival (the most of any artist), Hicks will release the fan favourite track “Slow Burn” to radio in coming weeks.