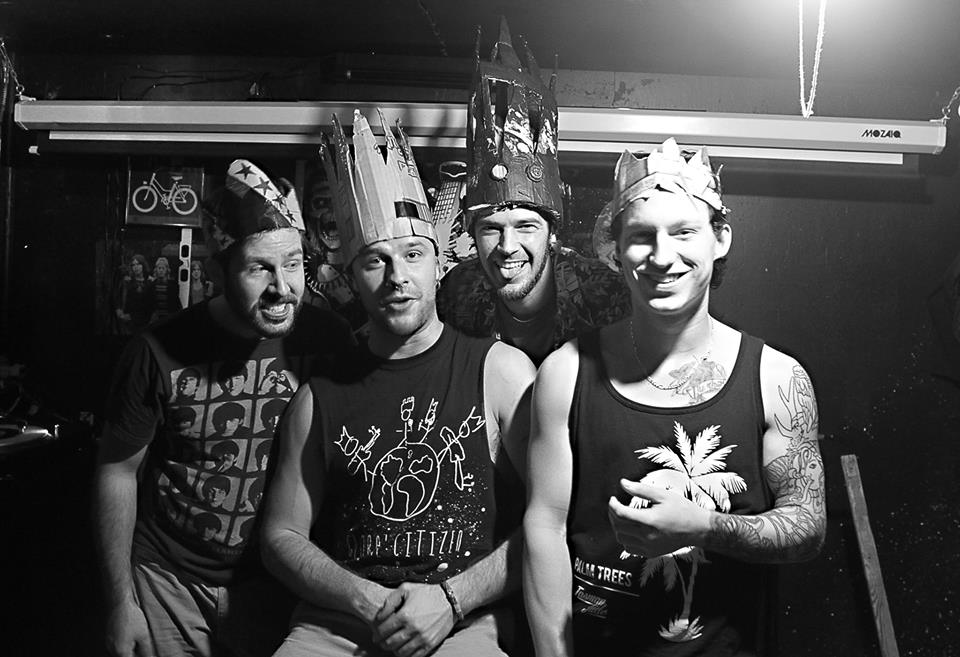 Hailing from Aylmer Quebec, The Cardboard Crowns have been able to share their reggae punk rock music across Canada and have been able to share the stage with bands like Wide Mouth Mason, Matthew Good and the Glorious Sons. I had the chance to ask the band a series of questions recently. If you’re in Toronto area tomorrow (October 13) be sure to check out their show with We Outspoken at Sneeky Dee’s, get more info HERE.

So tell me how you guys came together?

Joel and Matt met in middle school spending much of their time jamming on pot n’ pan drums and old hand-me down guitars (WE STILL DO) along side our original drummer Tokyo Speirs. We began experimenting with all sorts of musical ingredients, arranging them in each permutation, giving birth to 3 garage bands that would have a lasting impact on our music today: The Mad Fizz, The Fog Pilots, and the Rocket Propelled Space-Fish.

Several years later in 2009, the band would finally discover what we had been missing all along. A crazy little french garcon with a bass guitar, and a freight train of punk rock energy! It was with the addition of this Mystery Franks that we would begin our shtick.

Soon after the release of our first Album Global Citizen, drummer Tokyo left the group in search of other avenues and the band was out a drummer. At this point the band had familiarized themselves with the ska punk scene throughout Quebec and Ontario and the vacant slot was gaining a bit of attention. One drummer took action by the name of David Winstanley from Barrie ON. We had played with his band the Lab Cats several times in the ska circuit and took note of his skilled playing and humble demeanor. He gave us a call and we asked him to come for a practice. He showed up in a tux and knew half our songs already! This guys meant business. He’s been playing with us ever since.

With a name like “The Cardboard Crowns” there’s got to be a story behind that name?

The Cardboard Crown concept first made its debut when a couple members of the band were playing a medival strategy computer game (Age of Empires II). Joel wanted to one up the competition via emerging himself in medieval garb (hahaha). Later this very same crown would show up at one of the bands close friends bachelor parties When the band was scrambling for a name, the crown lay cast on the ground next to us in our jam space and it was a no brainer when Dave suggested “what about the cardboard crowns?”. Later on the band would reflect upon their name, injecting relevance to the title along the lines of: Crowns are a symbol of both dominance and piety. A symbol perhaps best worn in Cardboard.

It’s not mandatory or anything… but our fans are known to wear homemade crowns at our shows. Originally our hardcore friend-base started wearing crowns to our shows to show their support. We then tried to reciprocate the love (and start a wicked gimmick) by offering discounts ticket rates at the door for people wearing crowns. We’ve seen SO many awesome crowns at our shows over the years it’s hard to pick the best. We had one gentleman with a castle for a crown, complete with working draw bridge, we’ve seen Lord Sauron’s crown carefully constructed over at least several hours… personally I love it when people incorporate egg cartons. Those ones are just hilarious for some reason.

What was the music scene like in your hometown of Aylmer?

Not the strongest to be honest. There was one megre open mic once and a while and billiards bar called the Flix that hosted grimey punk shows once and awhile. If there was a scene, it was subtle. Aylmer is a suburb of Hull/Ottawa so if you wanted to see any live music you had to go into the city. Ottawa held some good venues like Mavericks, Café Dekcuf and capital city music hall where we’d go see bands like the planet Smashers, come back Kid, drop kick murphy’s and the early days of Rise Against.

Is there any artist that inspired your style of music?

Each of the guys has their own set of styles they draw inspiration from however there are several that we all touch base on. Our Main influences would be Toots and the Maytals, Sublime, Planet Smashers, Against me, all our friends, global and personal events.

Name three non-musical facts that your fans wouldn’t know but you guys?

1. we are published in a German text book For our song Global Citizen!

2. we’re nerds – we play Magic the Gathering, and League of Legends and we used to be involved with LARP culture. Joel’s actually featured in a mini documentary about the LARP scene in Canada.

3. We’re tight – unlike a few other bands we’ve encountered over the years. We actually get along together quite well for extended periods of time. We’ve bungee jumped together, we go camping where we play our favourite game like “PBR tossing”!

Who are some of the most played Canadian artists on your playlist?

Definitely a combination of the artists we grew up loving, the bands they play with now and band ,that we’ve met along the way

If you guys had the chance to collaborate with one of your favorite artists, who would that artist or band be?

Snoop Dog, because it would be a good time and a close second choice would be Rancid.

With your new album “Hold On” is there any plans of touring for you guys?

Yes! We’ve toured the album quite a bit so far, but we have new plans to tour Europe in the near future! We toured the States for the first time this year, which was a really cool experience for us, and as well as the majority of Canadian cities. However we are really excited to see how we’re received overseas.

One last thing, is there anything you want to let your fans know or possibly your new fans?

We have some new music in works for which we are really excited about and we might be playing some of it at our next show! And if we could say one other thing, it would be thanks to all of those who have supported us thus far and to make a crown for the shows to come! You won’t be disappointed!