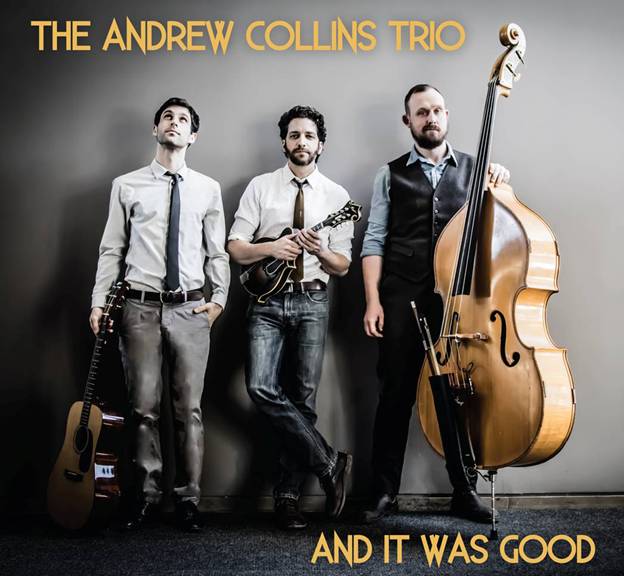 With 5 Juno nominations and 6 Canadian Folk Music Award wins behind him, Andrew Collins is releasing a new album with the help of Mike Mezzatesta and James McEleney, who round out the Andrew Collins Trio. The official release party for And It Was Good is taking place on October 21st at Hugh’s Room in Toronto. We caught up with Andrew to ask a few questions about the new album and what fans can look forward to.

I’m primarily a mandolin player and founding member of the Creaking Tree String Quartet and the Foggy Hogtown Boys.   I am now the band leader of the Andrew Collins Trio, which is made up of myself (mandolin, mandocello, mandola and fiddle), Mike Mezzatesta (guitar, mandolin, mandola and fiddle) and James McEleney (bass and mandocello).  I’ve been playing music for 20 years now and am enjoying it more than ever!

Can you tell us a little bit about the writing and recording process behind And It Was Good?

I worked on the material for this album for almost a full year before we recorded.  The composing process is so varied for me, it’s hard to generalize.  Often a little snippet comes to me, either through searching or accidentally.   Then through problem solving, I’m able to build on the seed until I have something that I can call a piece.   The material on this album is a little different from some of my previous works, as the structure of each piece tends to be quite a bit more elaborate.  Often, my music follows more of the traditional fiddle tune or jazz structure, where you have a couple parts that are about 8 bars long;  the melody is played, then soloing over the same structure, followed by a refraining of the melody.  OnAnd It Was Good (AIWG), I tended to abandon this form much more than usual, with much longer sections, in some cases without any repeating at all (as in Light From the Darkness for example).

This was a really incredible recording experience for me, as it’s the first album in the last 8 years, of any of my main bands, that I didn’t record myself.   Thanks to some help from the Canada Council for the Arts, I was able to get my great friend and Engineering mentor, David Travers-Smith to record the album.   David also co produced the album, mainly being an acute set of ears during the recording session.  I’m really grateful for this, as it was so freeing to be able focus on my own performance and have someone whose ears I trust implicitly.   We recorded over a three day period, at Canterbury Music Company.   All tracking was done live off the floor.  I then took the project back to my own studio, Sytesounds, to edit and then mix the album.

There’s a bit of a theme running through the album which was inspired by the 7 days of creation. Can you talk a little about the concept and how you worked it into the music?

Yes.  That’s true.  The album is inspired by the 7 days of creation.   Each piece, depicts instrumentally, what was created on each of those 7 days, with the title track closing the album as a little celebratory piece, And It Was Good.  For this album, I really wanted to push my music and composing further than I had in the past.   Usually, I had just written music as an abstract concept, with very little, if any, hidden meaning.    I was somewhat inspired by Vivaldi’s Four Seasons, and somehow, when I thought of the 7 days of creation, it just resonated with me.   Trying to depict a story, using the vernacular that I was versed in, was exciting to me.  Also, a seven movement work, seemed to have potential to be a complete album.
When I started reading the actual story in the bible, I was struck by how closely it paralleled an evolutionary story as well, so it didn’t need to be a religious work per se.   I read through the beginning of genesis several times until I found the words that seemed to jump out.  For example, the words “Everything That Creeps”, just jumped out of the page in reference to the 6th day.  Man was also created that day.  If you listen to track 6, you can hear in the improvised bass intro the sounds of life gurgling out of the bog for the first time.  That was actually what I asked James (our bassist) to interpret when we were recording the intro.  Then the bass and pizz strings, establish a pattern that sounds as much like creeping as I could imagine as the piece lopes over a very jazz-bluesy form.  The second movement of this day, moves into a lighter (distinctly bluegrass influenced) space which is meant to represent the introduction of humankind.   I realize that this is abstract, and may not be obvious, but it describes my interpretation of what’s going on.   Also, you could just as easily think of the sixth day as being a 24 hour period as you could thousands of years.

Mixing genres is a common thing for ACT to do in their music, and the new album is no different. Swing and Celtic, folk and jazz, classical and bluegrass, how do these combinations come together? Where do you go from here?

I guess they just find their way into my music now since they are all influences I’ve studied.   For this album, I didn’t think too much about what stylistic influence was going to be in each piece.   I was much more focussed on trying to interpret ideas and moods, instinctually.   In many cases, I was surprised by how things ended up.   Similar to how novelists often don’t know what is going to happen or what their characters will do, I didn’t know what was going to happen until I got to the end of each composition.

I’m not sure where I will go from here.  I’m just enjoying the beginning of getting this album out there.   At the very least, we’re going to tour and perform and see where we’re led by it all.

While this is an ACT album, you had some help with a string quartet to round out the sound. Why did you think you needed that little bit extra?

This was an idea that I had after listening to a David Grisman Quintet album, that had the Kronos String Quartet join them on an epic piece which was the title track of the album,Mondo Mando.   I was looking for some way to challenge myself to do something different.  I’m close friends with John Showman, Trent Freeman, Ben Plotnick and Eric Wright, which I named the Phantasmagoria String Quartet.  They are all, in my opinion, some of Canada’s best fiddle players, but also are all classically trained.

I still think of this album as an Andrew Collins Trio album however.  The material was all arranged around the trio.  We wood-shedded the new material for several months.  Once our arrangements were established, I set out to compose and arrange the string parts.   It was very important to me to have the material be able to stand on its own with just the three of us, as I never intended to tour as a seven piece.   I have done some string arrangements in the past, but I underestimated how much work arranging a whole album’s worth would be.   I’m super excited by how it all came out in the end, although I certainly had moments where I thought that I might have bitten off more than I could chew.

Since John Showman is the only local in the quartet, we only had the opportunity to rehearse twice and even then, we never had all four of them at the same time.  Thankfully, they are all incredible readers.  This meant that the studio was really the first time that I got to hear the full ensemble.  It was exhilarating to say the least.

What are you most looking forward to at the album release on October 21st at Hugh’s Room?

I’m really just looking forward to presenting the Trio to our home audience.  I feel like we’ve really brought our show and music to a new level through preparing for this album, and I’m super excited to unveil it.

We have a few tours already booked for the next year and plans for much more than that.   We’ll be through the prairies and into eastern BC in November, a coastal tour in the spring and our summer is already getting booked with festivals.

My main goal artistically is to be evolving and continuing to be excited about music.  I have some ideas for the next Andrew Collins Trio project, but am not ready to reveal them until they’re solidified.     On the touring front, I’m anticipating more and more from the trio.  We have such a great working dynamic and respect for each other.  I’m really looking forward to seeing where we get together.

After my experience composing for string quartet, I’m intrigued (and totally frightened) by the idea of working with a symphony orchestra.

There are so many people that I’m blown away with, that it’s hard to pick out just a few, but here goes…. The Fretless, The Slocan Ramblers, Ben Plotnick (his new album Greenland in particular), The Unseen Strangers, Lonesome Ace Stringband, Alex Pangman, Tom Parker (and the American Pour), Annie Lou, Andrew Downing and many many more.