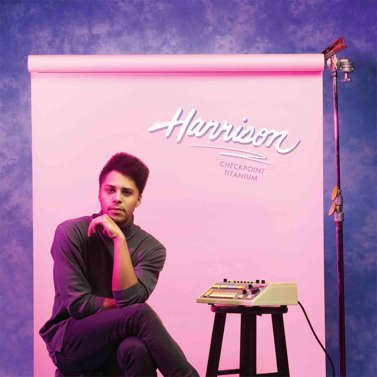 I recently had a chance to ask Toronto, ON based artist, Harrison a series of questions about his new album, and much more! If you’re in the Toronto area tonight (Sept 30, 2016), be sure to stop by the Velvet Underground for his show!

My Name Is Harrison Robinson and I like to make electronic music. I’ve been doing it for 4 years now it’s grown to be my favourite thing to do. I was born and raised in Toronto, Canada and always thought as music as an influential thing is my life but it wasn’t until around 17 where I thought maybe I could try making it myself.

You just released your brand new album, Checkpoint Titanium on September 9, how has the response been so far?

The response has been good I think haha. Many platforms I’ve dreamed of being on have picked it up like Beats1 and such. I’m so excited that it’s out but now I have this bug that makes me just want to release more and more and more.

What can you tell us about the making of this album?

Making the album was great. Not a lot of stress. It was nice to make because I decided i didn’t want there to be a theme. It was also more fun for me because once I finished, I got to wait to hear what the features would do and that was also really exciting because it makes you listen to your own music like you’re hearing it for the first time. If that makes any sense haha

You will be in Toronto on September 30 at the Velvet Underground, what can you tell us about your live performance?

My live performance was going to be all keyboard and my own music but there were some items I needed to execute that (at least execute it well) that I couldn’t get in time. I will be performing live with the features then going into a DJ set to finish off the night. I hope it turns out okay!

You have worked with some very talented artists, such as Ryan Hemsworth and Clairmont the Second, is there anyone in specific that you’d like to work with in the future?

I would really like to work with Carley Rae Jepsen. She is killing it. I always wished someone would bring more 80’s influences to pop music and thats what she has been doing lately. It’s amazing and I respect her so much for what she’s doing.

When can fans throughout Canada expect a tour from you?

Well after the show on the 30th, I’ll be heading to Ottawa with Ryan Hemsworth to play a show on the 6th then to Halifax playing the 20th and the 21st !

What’s up next for Harrison?

I want to release more music of course. I think I want my next release to be featureless but we’ll cross that road when we get there. I really would like to produce for others as well as media. I never thought music would be my career but it seems to be going that way and i couldn’t be more excited for the future.

Oh I got a few. Ryan Hemsworth, Charlotte Day Wilson, M.i Blue, Clairmont The Second, Bizzarh, Daniel Ceasar, BBNG, Seamus Hamilton, Cellphone Band, Prince Innocence, Sarah Band, a l l i e, Jazz Cartier, Frank dukes. Theres so much more hahaha I wish I could name them all off but I’d be here all day.

You’re The One For Me by D-Train. Best electro funk album to ever exist.

What’s your favourite thing to do on an autumn day?

Walk and get very emotional for no reason.

Last but not least, is there anything that you’d like to say to your fans?

I’d like to say thank you and take time to reflect on your day before going to bed.