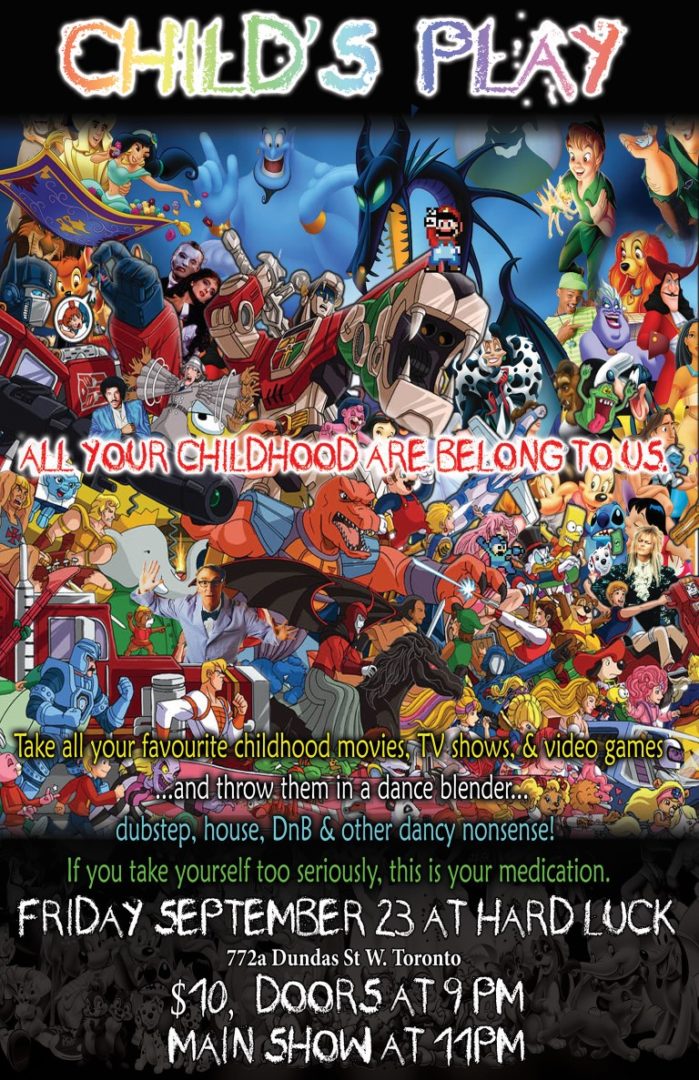 We recently had a chance to ask Remy of All Night Long a few questions about his upcoming event, a dance party called CHILD’S PLAY, which takes place tomorrow (September 23) at Hard Luck Bar. If you’re in the area, be sure to check it out.

My name’s Remy, I’m a full time composer/producer with a passion for putting on musical events around the city. I play in a handful of bands and have dabbled in audio/video presentations and musicals.

How did All Night Long come to be?

All Night Long didn’t start with the name, but rather a car ride where a good friend of mine was talking about Pink Floyd. I threw some on the stereo and he then asked me “Why don’t you perform this stuff live?” in a mostly-joking manner.  Within a month we were playing Dark Side of the Moon on a rooftop in the city. The name is a not so subtle nod to Lionel Ritchie’s tune, but also it’s very much linked to our vision to create parties that are worth being at ‘all night long.’ I connected with a bunch of people in the city involved in music and performance and now we’re a loose conglomerate of talented folk who know how to throw a musical party!

You are putting on a dance party called Child’s Play, what can you tell us about that?

Child’s Play is a collection of music from our collective childhood – movies, television, cartoons and even musicals (Mainly from the 80’s and 90’s) remixed into over the top dance music. Now this isn’t some rough chopped up and sampled stuff generally speaking. Instead I took every song in its entirety and time mapped, transcribed, arranged and finally mixed them into new version of the songs you remember but with a crazy dance arrangement on top. Finally I cut video for each song, in varying levels of psychedelia!

An 80s and 90s video dance party, what gave you this idea?

I was out dancing at one of the shake a tail events (60’s/motown/funk) and noticed how silly people were getting at times, especially with the older & less serious songs. I loved that noone was taking themselves too seriously – I feel like that’s the best way to have fun. I thought, what’s the least serious thing to dance to, and it just hit me! What if we can enjoy a nostalgic era while also letting loose as much as possible? In a world that’s often so serious, it’s great to be in an environment where people let all that go.

Is this an event you hope to do every year?

Oh definitely! If there’s the demand, I might be inclined to do it a lot more often!

I suppose I’ll say that if you’d like to unwind in a space of humour and fun, come and dance your heart out to childhood memories…. and also I can say  you’ve never seen anything like this before!