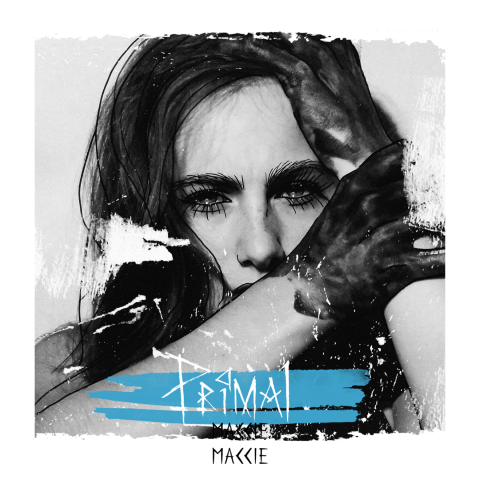 In the style, attitude, and passion of prog/punk matriarchs Kate Bush and Laurie Anderson, Maccie taps the radio sensibilities of Luba blended with an eased, yet intense, vocal style of Suzanne Vega creating a distinct, multi-layered listening experience.

The stunning cover art sets the album’s tone with a stark, black and white headshot of a self-established woman confidently nonchalant in her focused intensity, her painted raised hands half covering her face.

Maccie’s Primal art work is the antithesis to the icon Strokes Is This It album.   A throwback to the raw sexuality rock and roll introduced into modern music, Is This IT featured a picturesque woman’s naked profile placing her single black-gloved hand on the top of her curvy posterior.  On Primal, Maccie ‘s black painted hands create a rough polished look, her dark gaze peering out as a dare and a challenge, of knowing and experience, to lock into her gaze and find the inner meaning behind her eyes.

The first track “Wrong Girl” opens with a sonic wave, a seeming mix of natural water sounds transitioning into electronic motion.  This small clip of sound is a good analogy for the album, a seamless mix of electronica and live playing, nature and technology harmoniously blended like a beautiful musical cyborg.  Maccie’s pure voice sails on “Wrong Girl” discussing the narrator’s realization of who she is and, unapologetically, accepting it.

“High “evokes an ‘80s prog/pop mix with a Dire Straits inspired guitar opening, Kate Bush singing in a Montreal based, English blues inspired rock band.  Mid-tempo and steady with a combination of electronic drum beats, synth sounds, and live guitar, “High” is an anthem of self-discovery not allowing other peoples’ expectations to define who they are.

Ambient, echoed guitar opens “Body Bounce” before dropping into a heavy, step vibe with a flowing melodic line.  After hours body sweat in dimly lit underground clubs drip all over this track.

“Bleed” opens with a sudden gasped breath, foreboding deep synth sounds created by Vangelis’ evil twin, and finger snaps and hand claps that sound as if they were recorded in a secret room, behind a bookshelf or in a deep cellar, used in thriller or horror movies, where unsuspecting victims unexpectedly awake for unknown dark deeds.  The production is masterful, as listeners are taken on a sonic mosaic of interment sounds and samples, blended and unified, with sudden gasped breath breaks that are simultaneously startling and alluring.   “Bleed” should be on a cyber-punk, futuristic dystopia crime thriller filmed in muted colours, entirely at night, in a rain soaked world where everyone speaks in a 1950s film noir dialect, or in barely audible, monotone whispers.

The dark sonic tone continues with “Floating” infused with a jazz influenced vocal line.  A gentle reprieve one may expect from a song titled “Floating” is replaced with a sense of subtle dread like onlookers who may have seen Ophelia, wandering, picking flowers by the water.  The syncopated drum beats keeps the groove forward and catchy while the lyrics keep listeners rooted, a song that celebrates and mourns, asks questions without expecting any answers.

Working closely with Toronto producer Jeff Hazin, the production on Primal is amazing from start to finish, Hazin and Maccie masterfully creating the afore mentioned blend of sounds and placement of beats creating hooky, diverse arrangements that are unexpected yet catchy, half-grooved dancehall for the music snob in all of us.

Brooding, dark and joyful, Maccie is a black winged angel delivering earned redemption through songful salvation on her debut EP.