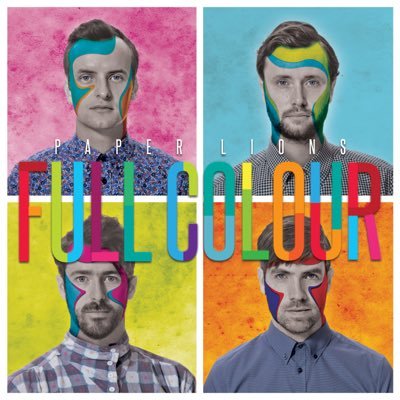 Charlottetown, PE band Paper Lions are at it again with their latest album, Full Colour being released today. The super poppy album is full of infectious beats, phenomenal harmonies, and relatable lyrics. The band is on tour throughout the fall in support of the album, including their kickoff hometown super show on September 30th.

The four-piece band certainly outdid themselves with Full Colour with its poppy but not too poppy sound, met with just enough guitar for it to appeal to their wide audience of fans. The first two songs on the album, “Don’t Wanna Dance” and “My Number” aren’t songs that I would be able to listen to day in and day out, they are very well written and played. “End of July”, a much slower and softer song, is much more my style. The almost echoing vocals go perfectly with the softer, more jazz like music. “Honestly” is also at a slower pace than previous songs and oddly reminds me of American Band Maroon 5, is another personal favourite on the album. “Call Back” brings in an extremely catchy beat right from the start of the song that will leave the listener little choice but to bounce along. Almost an 80’s/90’s vibe to it, the song will surely be stuck in many heads after they listen to the song. The vibe continues throughout the album but even more so in “Take a Look at my Girl,” full of horns, harmonies and a beat that just doesn’t give up. “Born to Rule” starts off seeming like a piano ballad with breathtaking harmonies before the drums kick in and bring the song to a whole other level. “Best out of You” closes out the album showing off the sheer vocal talent this band possesses, paired with their impeccable song writing skills.

When the album first started playing, I wasn’t entirely sold on how upbeat and poppy it sounded. I have never been so happy to be wrong. Though some are more my norm than others, there truly is not a bad song on Full Colours. There is something for everyone within these eleven songs and needs to be heard to be fully appreciated. I was thoroughly impressed by the latest endeavour of these Island favourites and proud to say that this album has proven that I am still very much a fan of the band. If you haven’t listened to any of their music before, Full Colours is a great place to start with its combination of fast and slower songs.