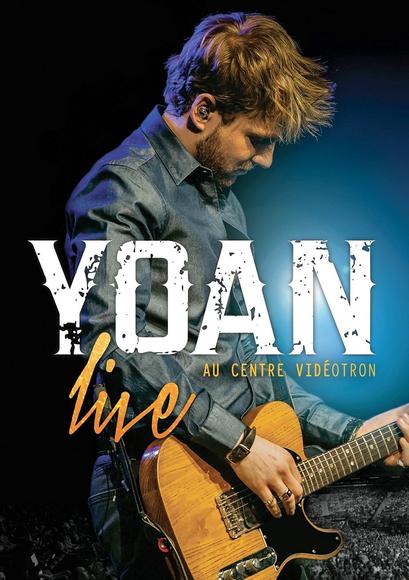 April 13th, 2014 was the day everything changed for Yoan. Walking away from season two of La Voix as the winner did more than open doors and introduce the young artist to the world, it also launched his astonishing music career. Fast-forward to March 23rd, 2015. This marks the day we were finally able to get our hands on the self-titled debut album, Yoan. Yoan’s debut album was certified gold after only one week of sales, and was certified platinum after three weeks. Yoanhas since gone on to sell more than 130,000 copies, earn the Top Selling Canadian Album of the Year award at the 2015 Canadian Country Music Association Awards, and continue to be a well-played fan favorite album in country music.

After an extensive solo tour of Quebec, New Brunswick and Ontario throughout the remainder of 2015, Yoan continued touring and performing straight through to 2016. On April 2nd, 2016 Yoan became the youngest Quebec artist to perform solo at the Bell Centre and on April 8th, 2016 was the very first Quebec artist to perform in the brand new Videotron Centre in Quebec. Joined both nights by very special guests, the April 8th show was recorded live at the Videotron Centre and has now been released on DVD for fans to experience the special performances over and over again.

Yoan: live au Centre Vidéotron is available on DVD now. Under the musical direction of Rick Haworth, and directed by Daniel Laurin (La Voix), the DVD gives everyone the unique opportunity to watch Yoan perform as if they were right there in the audience. The DVD will offer exclusive content such as images from Yoan’s first trip to Nashville and backstage moments from the show. Yoan: live au Centre Videotron is also filled with unreleased duets with his special guests; “Summer Wine” with Isabelle Boulay, “I Didn’t Fall in Love with Your Hair” with Brett Kissel, “It’s Friday” with Dean Brody and “Mamas Don’t Let Your Babies Grow Up to Be Cowboys” with his father Sylvain Garneau.

Yoan expressed his thoughts on the release of the DVD. “I feel honored to present my show at the Videotron Centre on DVD. It was a very important moment for me and it represents well all the work we’ve done over the past two years. Thank you all for making me live all those amazing experiences.”

The official track listing for the DVD includes;
Gonna Fall in Love with You
Kansas City/Hey Hey Hey Hey
Dis-moi
That Kinda Guy
Good Hearted Woman with Brett Kissel
I Didn’t Fall in Love with Your Hair with Brett Kissel
I’ll Find It Where I Can
Tu m’as manqué
Je t’aime évidemment
Ring of Fire
Summer Wine with Isabelle Boulay
J’entends siffler le train with Isabelle Boulay
Mamas Don’t Let Your Babies Grow Up to Be Cowboys with Sylvain Garneau
Never Could Toe the Mark
Trouble
Tulsa Time
I, Who Have Nothing
Rosie
t’aimer trop
She’s a Lady
Whole Lotta Shakin’ Goin’ On
Baby What You Want Me to Do
It’s Friday with Dean Brody
My Way Home
Goodbye Mother