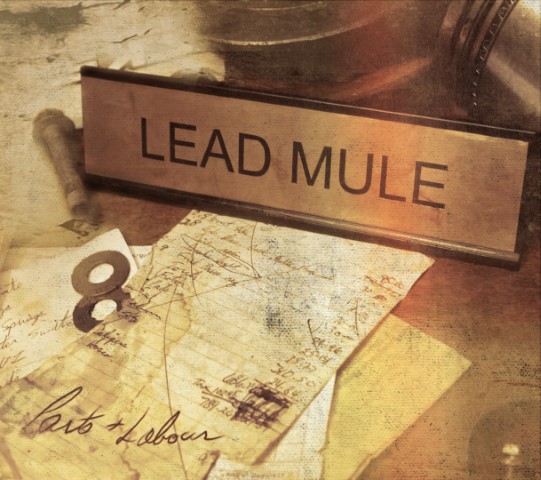 If Forest Gump’s life is a box of chocolates, Lead Mule’s life is the PEI Scalloped Potatoes Chip flavor with a side of chunky stew made of gnarled semi-raw beef strips, unskinned purple potatoes, unpeeled carrot chunks, mostly raw onion quarters, and half the spice cupboard graciously sprinkled throughout.  In a “musical spice” rack sense, here is the immediate, noted, sonic dashes sprinkled throughout during an initial listen of Parts & Labour: the Odds, the Headstones, the blue Tragically Hip album, Econoline Crush, the Mavericks, Social Distortion, Fastball, Collective Soul, and East meets West (Texas vs. Nova Scotia).

Lead Mule, a four-piece rock outfit from Yarmouth, NS, touch upon the great elements of hard / pop rock and make it their own,  a combination of subtle musical references and original creative influence.  These boys wear their musical hearts on their bare-armed, band patched, denim vest sleeves.  (They actually wear dark hoodies, but the denim patched vest comparison is too accurate not to use.)

The title track “Parts & Labour” launches into an opening guitar riff to make the Headstones proud.  Melodically, the vocal line is reminiscent of the Odds with driving, smooth, long phrases with a rock edge.  An overall comparison for this tune is a blend of straight ahead Headstones’ chugging with the soaring vocals, background harmonies, and musical arrangement of the alt. rock sound of the Odds.  Just as listeners settle into the groove, the bridge introduces a touch of metal guitar transitioning into a Bad Religion double time feel in the drums.  The lead singer’s voice has a tinge of Greg Graffin from Bad Religion on a nice day, punk rock angst while driving the crowd to late night Saturday night munchies at Denny’s.

“Finest Kind” is a tough folk rock song, a song that would beat up Blue Rodeo on the playground.

“Break” curveballs with an intro reminiscent of Econoline Crush, while riding within the established folky-rock tonality with a chorus that turns into an uplifting U2 moment.  “Witch Hunt” keeps the mid-90s industrial esthetic with a bit of Collective Soul vocals and big guitars.  The strength of Parts & Labour is the diverse mix of musical inspirations that coalesce creating a distinct, diverse sound.  There is an inkling of diverse musical influences while retaining an original, hard rock sound.

An overall musical tone of the album is the difference between East Coast and West Coast, from Northern States to Southern States.  Bands either shun or revel in their geographical sound, how their physical musical scene or community effects their sound.  In the US, the New York punk scene has a tighter, less poppy sound than the East Coast So-Cal punk sound.   Further South, besides the obvious country scene, rock music has a distinct, Mexican based open chord modality combined with American Southern blues and hard rock.  Take the open sound of the Southern States, the lilt of Eastern Canada, and the rock base of the Canadian Shield as a musical topography of Lead Mule’s sound.

“Special Someone,” “Pulvius Tempora,” and “Arrows” should be put on the Mavericks / Headstone side project record so they can listen to their own album while on a cross-Canada road trip.  “Arrows” in particular, is the mix of the Mavericks signature country style with their syncopated, guitar groove, only here more rockafied.  Is rockafied a word?  It is now…

“All the Time” has the steady, low groove and leather jacketed swagger Hugh Dillon, and whatever musical street gang he puts together, would specialize.   The ending has Local H timbre to the higher range lead vocals, and switch from driving drum beat to tom pushes.

“Semi Automatic” should be the single after Fastball’s “The Way” where, instead of the couple disappearing and found at the bottom of a ravine, they become bank robber’s specializing in knocking over small town banks.  Hooky, riffy, catching, with an ear worm that will burrow in your auditory canals for days.

The closing track, “No One’s Fault” is a Trevor Hurst written song for the Tragically Hip’s blue album (yes, it is their self-titled album, but I enjoy making the Weezer reference).

Emotional delivery with tight production, Parts & Labour is a solid contribution to the cannon of Canadiana hard rock and deserves to be part of any hard rock lover’s, or musical aficionado’s, collection.

Lead Mules’ debut album Parts and Labour is out via Pure Grain Audio and Soundcloud.  Find them on social media on Facebook, Twitter, Bandcamp and leadmule.ca.  The video for their lead single “Parts & Labour” is available on Youtube.