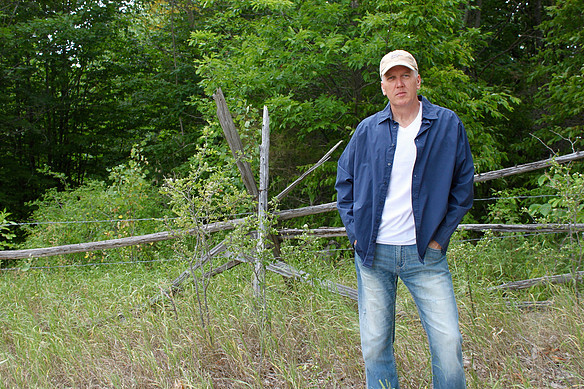 I recently got a chance to catch up with Ontario born and raised, country music artist Jim Levatte. This multi talented singer is gearing up to release a self titled album. Jim wrote and produced the album in his studio in Ontario. He not only does all the vocals, but he also plays all the instruments. This guy is unstoppable! Check out our interview below!

You have 6 studio albums, and wrote your first song ah the age of 9! What is the most challenging song you’ve ever recorded? Why?

I love the recording studio. I guess the most challenging songs to record would be everything on my first three albums. They were all written and recorded before I built my own studio, so we had outside producers, and engineers. Everything always seemed to be so rushed. There were time schedules, and budgets to meet, so I was never really happy with the finished product. There is so much freedom when you have your own space to record. I have been known to lay down a guitar track, or vocal at 2 A:M, if the inspiration hits me. You usually cant do that in a commercial recording studio.

Describe the recording process since you write, preform and produce it all yourself. What does that look like?

I usually start by recording a rough guitar track. I always use a click track. The click track makes it much easier to lay future tracks down, especially midi stuff. Then i begin to build the drum tracks. These consist of samples, midi, and real drums. Once the drum tracks are completely finished, with cymbals, fills etc, I will lay down the bass guitar track. After the bass guitar is finished, I will lay all the guitar tracks. All the guitar tracks are usually doubled, then when mixing, I can thicken them up where needed. The final instrument tracks are next, whether it be piano, strings, mandolin, etc. Finally the vocal starts. I can usually lay the vocals down rather quickly. Typically, I lay down two or three takes, then I have enough to build a solid lead vocal. Then I will double the lead vocal, so I have a little extra, if it needs fattening in the mix. The trick , when working by yourself, is to not dwell to long on any given parts. I remember once fighting with a lead vocal all day trying to get it perfect. I must have recorded thirty times. I finally gave up and went to bed. When I got back to it the next day, I ended up using my very first take from the previous day. I could have saved a lot of time had I only realized this. This is when a second set of ears usually helps.

Which of your recordings are you most proud of?

I have one album that I cant listen to at all. It was one of those rushed ones I spoke about earlier. I like all the others. I will always remember the first time, our first album was played on the radio. That was pretty exciting. We were doing a ton of live gigging, and the album sounded great.  I think it is my favourite.

What do you want listeners to take away from your upcoming album release?

I really hope they enjoy the songs as much as I enjoyed creating them. My expectations are never really too high when releasing an album. It is a pretty tough business. Its so great when people can listen to every song on the album, instead of blowing by two or three of them. It is taking me a little longer than I expected to finish it, cause I ditched a song or two. I want every song to be as good or better than the one before it.

How did it feel hearing that “This Ain’t My Day” had debuted at 68 on the New Music Weekly internet chart?

Fantastic. It is so great to know people are liking the song. There is no better compliment.

Besides the album release, what can fans expect from you next?

I have been In talks with a production company  to do a video for “This Ain’t My Day”. We have a few live shows under our belt, so I am expecting that to grow in the next few months. I am forever writing and recording new songs. so there will be a bunch of new tunes posted shortly.

Here at Canadian Beats, we just love to include fun questions to help your listeners get to know you better..here we go..

What’s one thing people would be surprised to know about you?

Heavy Metal was my first love. I am a huge guitar rock fan. Edward Van Halen, Randy Rhoads, Steve Vai, Yngwie Malmsteen. I have all there albums. I spent hours and hours trying to copy them.

I have hours and hours of tape with song ideas on them. Sometimes I am whispering a lyric, sometimes I am in the bathroom with my guitar, maybe making up words to a melody line so I wont forget it. Anyway , they are pretty awful, but they get the job done. One day , an ex girlfriend of mine thought it would be funny to play them for a bunch of people. I was pretty embarrassed, everyone was laughing.

Do you have any pet peeves?

Yes, the other guitar players noodling around on their instruments when it’s time to tune, or discuss a song, drives me crazy.

Most played song on your personal playlist?

Right now I am wearing out everything by Chris Stapleton

Last but not least, what would you like to say to your fans?

I hope you like the new album, and keep in touch, let me know what you think. And thanks so much for listening.