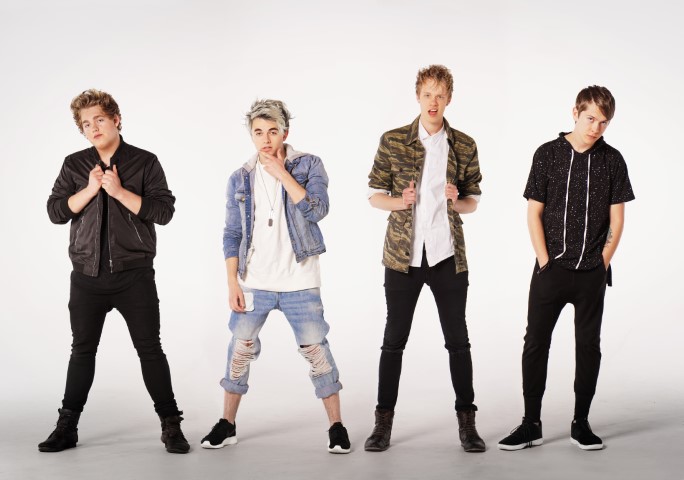 Winnipeg pop sensation Panicland are fresh off the release of their hot new single “Bad word”. This four piece boy band is more than just great hair and 1D doppelgängers. They have enough talent and music industry support to be taking over the pop charts worldwide in no time. Canadian Beats had the chance to catch up to Braedon Basseo of Panicland to talk music and that ridiculously perfect hair, and here’s what happened.

“Bad Word” has already been tied as the number one most added single to Canadian radio the week of release, what was your first thought when hearing that, how did it make you feel?

After putting so much work into “Bad Word” for the past few months it was our first taste of any sort of payoff. My first thought was “Who are we tied with?” and my second thought was “Who can I tell?” Haha.

I read that you guys have pretended to be celebrities and even worn disguises to infiltrate parties and network with huge players in the industry, tell me about that!

That’s one of our favourite hobbies, haha. The last time we snuck into any parties was in LA during Grammy-week. We snuck into a different industry party every night. Everyone from Taylor Swift, to Skrillex, to Paul McCartney was at these parties and we definitely were not supposed to be there. The security was higher than airport security and it was next to impossible to get in. So we dressed the part, got a few people to take our pictures outside to look like we belonged, and approached every random person walking out of the party, asking if they could slip off their wristbands to let us “borrow” them. When that didn’t work we decided to look up the Instagram hashtags for the parties. We’d find pictures of people inside, click their profile, check the tags, steal their names, become them and give their names to the security in charge of the guest lists. It worked every time.

In such a tough and competitive industry Panicland has built up quite the name for yourselves on your own, what do you think is the key to your success?

You guys are very active on all social media aspects and connect with fans consistently, how important do you think being active on social media is as an artist in the modern music industry?

I think it’s the most important thing, next to the music. Mystery in music is starting to disappear and attention spans are getting shorter. Before the internet fans would have the album covers to stare at and whatever interviews they could catch on MTV. Now it’s possible for fans to know what time you woke up, your favourite cereal etc and I think it’s great. It makes it easier for them to feel ownership and a genuine personal connection with their favourite bands.

What was it like co-writing with writers that have worked with huge acts like Britney Spears and Nick Jonas?

I like to take it as a learning experience every time. These are people who have made lots of mistakes to get to where they are – we can learn from that. As a songwriter I think it’s important to never get comfortable and set in your own ways. When I make an effort to challenge myself as a writer and step outside of my comfort zone it always shows in the music.

What made you decide to pursue music as a career? Has this always been something you have dreamed of doing?

For me it was the only thing I ever thought of doing but it was never a conscious decision to do it as a career. It happened very gradually – one thing lead to another and here we are.

Canadian Beats likes to include a “just for fun” portion to help your fans get to know you just that much better, ready!?

I’ve been dying to ask, the hair, how do you get it that perfect!?

Haha, I used to be obsessed with doing my hair because of Danny from the movie, “Grease”. Then Billie Joe from Green Day inspired me too always keep it funky and different.

If you could play a show with ANY artist dead or alive, who would you play with?

Elvis Presley, back in 1956 when the fans rushed the stage and the parents protested outside the venue.

What’s one thing you have to do as a ritual before playing a show? Do you have good luck charms?

I watch the James Brown TAMI performance the morning of every show – the energy is pretty contagious!

And I’m sure the ladies all want to know, any of you single?

And last, but of course not least, do you have anything you would like to say to your fans and supporters?

We are extremely appreciative of everyone jumping onboard at the start of our careers. We want to make everyone proud.