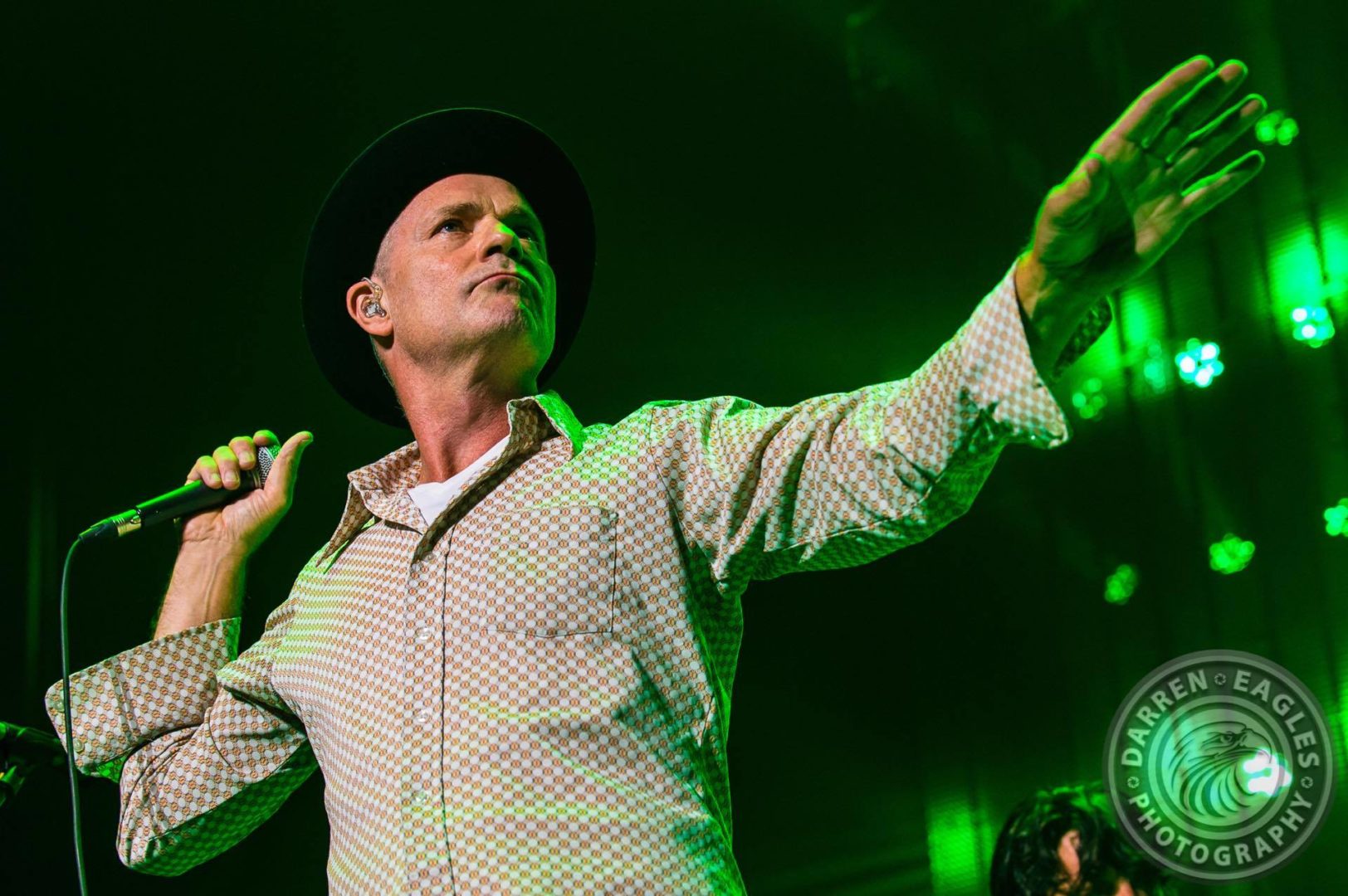 Photo credit: Darren Eagles (Image is from The Tragically Hip’s concert at Casino Rama in September, 2015)

Today should be a big day for me, I’m scheduled to shoot Blue Rodeo, icons of the Canadian music world, in the biggest non-festival venue I’ve ever shot in. Yet as I sit here in a Starbucks a few blocks from the venue an hour before doors; fighting back the tears that have been coming far too easily all day; I feel none of the usual pre-show “I’m gonna fuck this up” nerves. Instead all I feel is bittersweet numbness.  I feel this way because I know if I could find a way to justify it, if I could find a way to do it without letting anyone down…  I would walk out on this show in a heartbeat to go stand in the sweltering heat of the Horseshoe Tavern, which will no doubt be filled to capacity, to watch the CBC broadcast of The Tragically Hip’s final show.

I remember my first time hearing The Hip like it was yesterday. I was about 13 years old and obsessed with all things British new wave. Robert Smith and Morrissey were gods in my world and I had no interest in expanding my horizons. After all, if it was on the radio it was popular, and I most definitely wasn’t so why would I want anything to do with it? Then, while on a drive with my parents, Last American Exit came on the radio. It spoke to shunning popularity unless it was offered on your own terms. To finding your place and making your happiness there. I was hooked. The Tragically Hip not only became the reason I fell in love with Canadian music, but they also influenced so many of the bands that came to dominate my teenage years. Without The Hip I never would have delved into Our Lady Peace and Moist, Thrush Hermit and Hayden and so many other names big and small. I also never would have found myself wrapped up in this industry which has afforded me so many opportunities to live my dreams and get to know bands like Alert The Medic, FM Berlin and others who I consider dear friends.

To me, Last American Exit is the secret of The Hip, even from the start they owned their Canadian-ness. They refused to shed that for the brighter lights found south of the border. From the very beginning Gord Downie wrote songs for us, about us. Things we relate to and live day to day. The Hip are ingrained in the Canadian consciousness because their songs are our reality. Songs like 38 Years Old , Wheat Kings, Bobcaygeon they resonated with us because they are our stories being told. And we rewarded them for it, buying millions of records, countless t-shirts and concert tickets. They gave us our fables and we gave them our dollars. And in their success they played by our rules, accepting it in a way that is palatable to a Canadian audience. With humility and without ego, fame never went to their heads. You would be hard pressed to find anyone in the music industry with a bad word to say about any of them.

I personally had the good fortune to meet Gord and the boys several times over the years and the one thing that stuck with me, aside from their warmth and friendliness, was that Gord Downie just genuinely cares about those around him. When you have the pleasure of standing in front of him talking to him you have his full attention. He doesn’t just nod politely and smile as he looks for an out, he actively engages with you and wants to hear what you have to say. I think that’s why it hit so many so hard when Gord announced this past May that he was diagnosed with an incurable brain tumour. We were all taken by surprise because he is a man who, though always ready to put his face out there for any cause he feels worthy, is known for fiercely protecting his privacy. In many ways, for me at least, that was the first clue that this was really serious. We’ve had several months now to try to wrap our heads around the news but for many of us, myself included, it didn’t really hit home until today. Until the last show.

Like many across the country I was unable to get tickets for the final tour, which sold out in minutes, and I also didn’t get approved to cover it. Thankfully for all the CBC will be broadcasting the show. I won’t be watching with the rest of the country though, I will be spending my evening covering Blue Rodeo, because as much as I want to be in a room full of people hurting the way I’m hurting, watching Canada’s Band give their swan song, Gord wouldn’t want me to. The man who has given so much support to so many in the Canadian music community would never want to take the spotlight away from his friends and respected colleagues.

Unlike many I can take comfort in the fact that over the years I have been lucky enough to have seen The Tragically Hip 30 times, most recently on their Moncton, NB stop for the 2015 Fully Completely re-release tour. This time out I was able to go with my son who, throughout his teen years and now into his early 20s, has become my favourite concert buddy. He has inherited from myself, and his father as well, a passion for music that was planted in both of us in many ways by The Tragically Hip. If that had to be my last time seeing them I wouldn’t have wanted it to be with anyone else. In all those gigs I can say I have never once seen them give a bad performance. Regardless of venue or audience size The Tragically Hip have always given everything they have, and from everything I’ve seen that is the case with these last shows despite Gord’s health problems and treatment.

The past few days I’ve found myself having to try to explain to people, mostly those who did not grow up in Canada during the 80’s and 90’s, who are wondering what the big deal is with the broadcast tonight, just what it is about The Tragically Hip that has the entire country so invested in this. Prime Minister Justin Trudeau tweeted recently “Gord Downie is a true original who has been writing Canada’s soundtrack for more than 30 years” and true though this is, it goes deeper than that. The Tragically Hip have not just been our soundtrack as a nation, they have been our family. They’ve been there for every wedding, family reunion, birthday party… every family event, Gord and the boys are front and centre with us.

As a nation Gord Downie has been our wonderful, wild, sometimes crazy big brother for 35 years now. He’s beat us around like all big brothers do, he’s teased us unmercifully for our quirks but he’s also been there for us when we needed it most. He’s helped us ease heartache and celebrate our success. He got us through the best and the worst times of our lives… and now we’re losing him. Like all great big brothers however, he’s being strong for us, giving us these last shows, so that we can be weak a moment. Our selfless big brother is giving us our chance to cry and to say goodbye as only he can, with grace and dignity and in a way that will forever allow us to remember him at his best. So for those who struggle to understand what the fuss is, it’s as simple as that. Our older brother Gord is dying and we’re saying our goodbye’s before he goes… even as our hearts collectively break while we do.