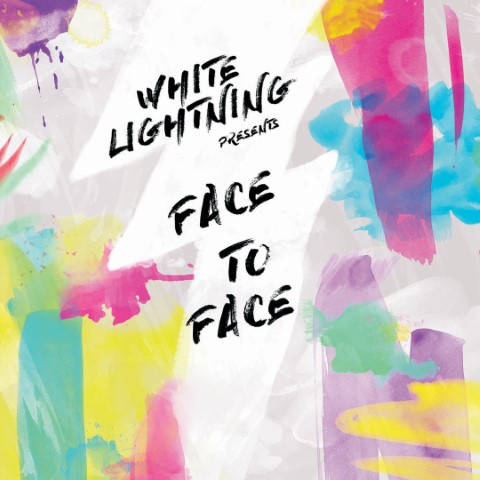 Though the name may suggest, Edmonton based White Lightning is not the anti-hero to the great, late 1970s superhero Black Lightening who, after a major revamp in the 1990s, lost his cool.  In fact, White Lightning’s newest release Face to Face, in modern comic continuum, would be played on Black Lightening’s iPod right before he jumps in to punch out bad guys, or restart Superman’s heart, or played for the Justice League on a Javelin-7 trip to the Watchtower moon base ensuing a mini-dance party with Green Lantern making a disco ball, the Flash mixing drinks, and Wonder Woman either looking not impressed, or kicking up her heels with golden lasso in full swing, depending on her mood.

Yes, Black Lightening was asked to join the Justice League and turned them down, and yes, he was part of the greatest comic teams ever made in the 80s, Batman and the Outsiders – when he still had his cool – which is still, in this biased opinion, one of the greatest collections of rogue and misfit superhero team books ever created, next to Creature Commandos.

But why all this talk of a 1970s superhero, who was cool in the 1980s, revamped in the 1990s, being part of a modern pop culture continuum?  Funny you should ask, or have the question asked for you….

White Lightning’s Face to Face is the album written and recorded by the Bee Gees, Fine Young Cannibals, Cold Play, Justin Timberlake, and The Flaming Lips, sometime between the mid-80s to mid-90s, lost, found, and re-recorded by the remaining members’ kids in 2016.  Face to Face is a fun, summertime rock album with poignant writing and reflective moments, an album to fulfill ones pop rock listening and alt. rock sensibilities.

Bandmates Steve Bosch (frontman/songwriter), Jason Gril (bassist), and Enoch Rottier (drummer) create a modern sound with a mixed vintage vibe writing an eclectic album of enjoyable, thoughtful tunes.  The misnomer of “summertime rock album” with “reflective” is quickly dispelled after an initial spin. Listeners will be taken-in by the mix of fun rhythms with meaningful intent, young music for old souls.

The title track “Face To Face” is a 90s alt. rock pop tune with syncopated percussion, punchy bass and blend of frontal toned lead vocals and soulful background vocals. The falsetto vocal lines and groove guitar set the tone for the tune, a pocket-grove rock tune with funk undertones, and glimpses of dance tracks and hands above head dancing.

“Follow Your Heart” intros with a new wave, industrial, punk bass line quickly morphing into a dance club aficionado beat and light-hearted party vibe.  Instrumentally, it is a combination of strong riffs and interjecting licks over a steady groove.  Lyrically, the blend of pop and thought with “why would follow your heart / you don’t even know what’s it for” makes any Smith’s or Morrissey fan proud.

The party continues with “Make This Love a Home”, “One Last Time”, and “1979” displaying different musical influences with a pop dance vibe.  “1979” rocks out into an up-tempo blues while blending Caribbean rhythms and straight ahead bass chugging.  Seriously, it is a transmusic blend that needs to be heard to be appreciated.  Oh, and long held synth chords so no one forgets Vangelis.

“What Went Wrong” and “Stand By Me” venture into slower, mid-tempo tunes retaining a sense of pulse.  Even the slow songs are danceable, the kind where you can slow dance with a long time crush but not feel too awkward because, even when the song gets break down in tempo, there is a push to keep it from getting too personal, or, even better, an emotional shared experience of heart rendered rock, the kind where the world disappears and imaginary glitter fireworks explode around the entwined couple on the dance floor.

“Pick Me Up” is a song that can be played as a private bet to see how fast the unsuspecting listeners get up and start to dance, like “Day-O (Banana Boat Song)” in Beetlejuice, where the audience, or house guests, will not be able to help themselves.

The albums closer “Take It or Leave It” is a musical trivia contest waiting to happen. The rules:

White Lightning’s new album Face to Face is available on Aug. 19th with the first single, “Follow Your Heart” available now.  With an extensive summer tour, White Lightening will be ready to rock the crowd for two shows in Edmonton, AB, Glenwood Party in the Park, Sept. 10th, and Gateway Alliance Annual Kickoff Party Sept. 11th.