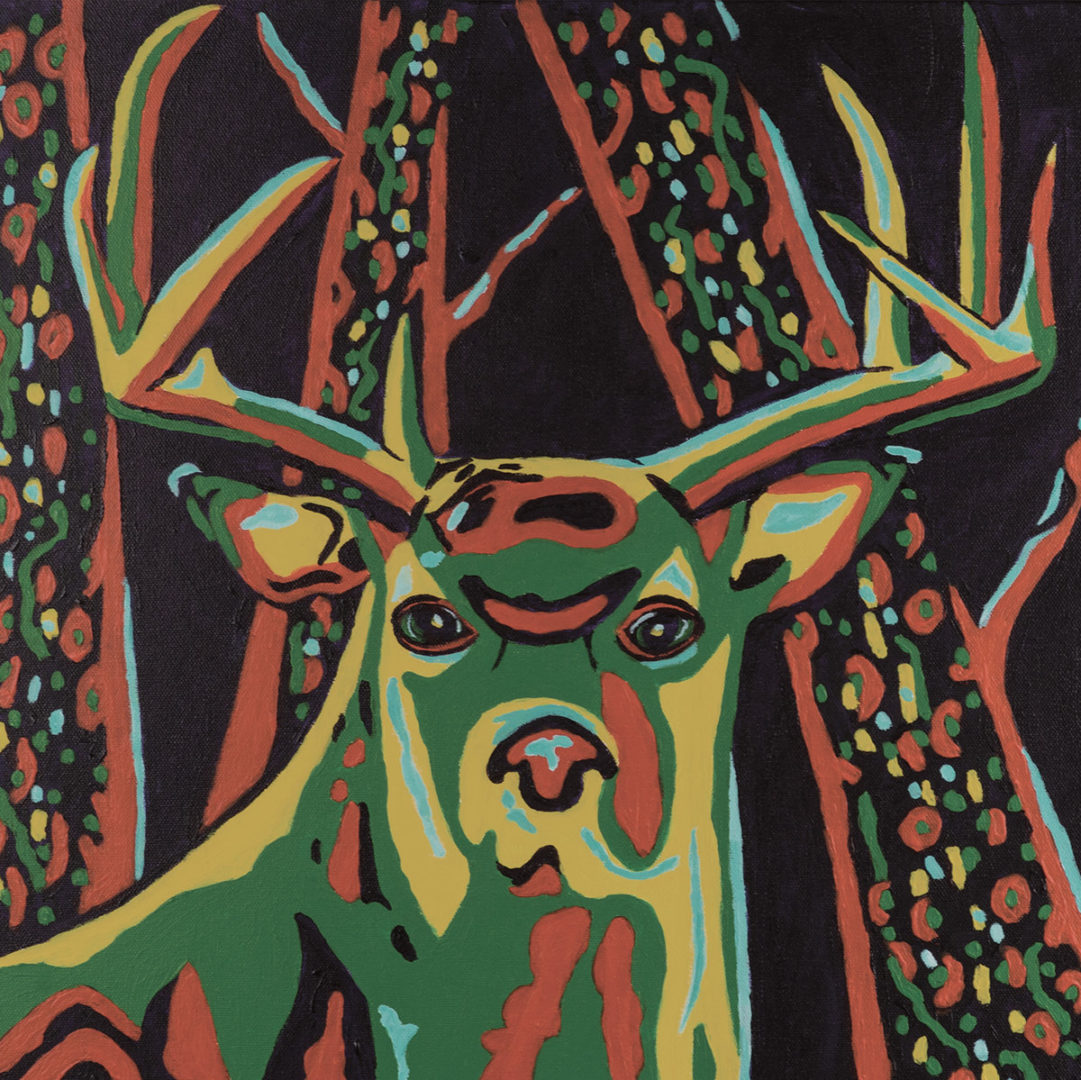 If the Steve Miller Band, and an anachronistic Blind Melon, moved to an anachronistic Tolstoyan commune in the 60s, then spent the few next decades rambling across Canada’s great varied topography of amazing forests, badlands, and tundra, playing every open stage, roots and folks festivals they came across, the four surviving members’ resulting studio album would be Limestone Chorus‘ Deer Friends.

Deer Friends is firmly rooted in its devout love for Mother Nature and human connection exploring the theme of interconnectedness between all living things in a joyful, mellow celebration of positive, mature music.  This album sparkles throughout, with joyful, embraceable, heart-felt lyrics.

The album opens with “Outside of Time” a Talking Heads Calypso influence, light groove with open, sparkling guitars.  The single noted electric guitar lead is backed by a steady strummed acoustic guitar, a great juxtaposition of individual clarity with warm, chorded rhythm.  Good unison playing throughout with breaks and fills.   A hint of clever word play to appear throughout the album with the closing line “I’m not out of time just outside of time.”

“Some People” switches to a blues influence, rock groove, with an echoing, single note electric guitar riff, again shying away from big electric chords.   The acoustic rhythm guitar continues to be a nice touch, good use of distinct sounds.  Melodically it’s a folk rap vibe, straight ahead articulated rhythm with folk sensibilities, positive music without pandering, joyful but not silly.  Cool instrumental horn line at end with a solid push, yet still keeping the laid back vibe, creating distinct sections while retaining their shimmering sound.

Track three, “Fight For Mother”, has the acoustic guitar front and centre, setting up the song before the electric guitar and vocals kick in.  Change in vocal style and production, and addition of cello, nice touch for song diversity.  This tune could be placed on an episode of the Degrassi High: the Next Generation where Drake’s character is having a heartfelt talk with his crush who, when he finally admits his feelings on the way home from prom, tells him they are “just the best friends ever” and he “will always have a special place in her heart”.  He walks her to the door step, and, as he walks back to his car, he looks back at her house one last time longingly with a new sense of mature, relationship wisdom.  It slowly begins to rain on him as he gets into the car and pulls away.  Does this have anything to do with the lyrics?  Not at all, but fits perfectly sonically.

“Into The Fire” gently pushes throughout the tune with a steady beat and solid grove, electric, acoustic, and bass guitar taking turns in the forefront of the mix as needed.  To continue with the Degrassi references, “Into the Fire” would be playing when some character’s best friend is caught cheating on an exam, or being pressured into doing drugs,  or a montage of fighting friends coming together to deal with another friend’s teenage alcoholism.

The sparkle and shine, as Econoline Crush would say, continues with “Winter Light”, a catchy light grove with wise production decisions of placing the bass more central on this track to let the walking notes and riffs stand out.  The syncopated drum fills are meticulously placed, creative rhythmic variances without over playing. Rudling does a great job varying fills and adding subtle changes to his beats helping move the tune along.

Lyrically there is consistent desire to give adoration to, and return to, nature.  “Woods and Water”,  the leadoff single begins “I was born in a city in a garden / in a place I learned to call my own / There must be something / painted in my history / that makes me wanna crawl back to my home.”  The narrator in “There I Find You” will “touch my lips to the ground below you / inhale all the rich soil and growth” and “I hear your gold / I feel your flow / you make me whole / yeah you make me whole”.  There is this eased urgency of returned connection, to find the balance of the human spirit and the physical connection to the earth that connects all living beings.  “Woods and Water” and “There I Find You” are the lost Steve Miller Southern rock hippy tracks no one knew were missing.

Closing the album with “Moon”, which comes out at the close of day, is the Blind Melon song they should have recorded.  An ambient jam transcending into a gently pulsing folk rock tune.  A great summary of the album encapsulated in one tune.

The production by Ian Romano and Limestone Chorus, with mastering by Dan Weston, creates a wonderful blend of clear sounds and highlighted instrumentation when needed to focus the audience’s ears.  Extra points awarded considering the multiple recording and engineering credits in different locations to create an over-all well balanced album.

Limestone itself is composed of skeletal fragments of marine organisms to create an organic sedimentary rock with multiple uses from building materials to paints to toothpaste.  Limestone Chorus has done this musically with an organic based, gentle rock album with varying levels of intensity and space, meaningful depth and light-hearted groves.

Limestone Chorus’ new album Deer Friends is out via Indoor Shoes and available on Bandcamp.com.  Find them on social media on Facebook, Twitter, Instagram, and Limestonechorus.com.  The video for their lead single “Woods & Water” is available on Youtube.