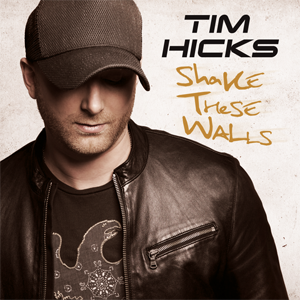 After the successful release of his latest single “Stompin’ Ground,” Tim Hicks has finally unveiled the details of his third studio album Shake These Walls which is set to hit music retailers on September 9th via Open Road Recordings and Universal Music Canada. Within its first week of release, “Stompin’ Ground” was the number one most added song at Canadian country radio and the top selling digital Canadian country single proving that fans want to hear more from Hicks.

Hicks has also officially released the album cover and track list for Shake These Walls which will include the debut single “Stompin’ Ground,” as well as the album’s title track; “Slow Burn,” “Slide Over,” “We Came Up,” “Let’s Just Drink,” “Don’t Make It A Love Song,” “The Night Gets Us,” “Too Fast,” and “Forever Rebels.”

Hicks had his hand in writing each song on Shake These Walls. “I wanted to show people I had grown,” Hicks says about Shake These Walls. “There is truth in each of these songs because I co-wrote every one of them.  I have a personal connection with every lyric, every riff.” Produced by Corey Crowder (Chris Young) the album promises “a combination of slick party-fueled anthems, blue collar country and free-spirted romance” inspired tunes that Hicks fans are sure to enjoy.

Shake These Walls is now available for pre-order at iTunes on and will feature the instant download of “Stompin’ Ground” and “Let’s Just Drink” for fans along with two additional new songs prior to the official album release on September 9th.