By Giosi Tortorici on August 2, 2016@https://twitter.com/giosimtl 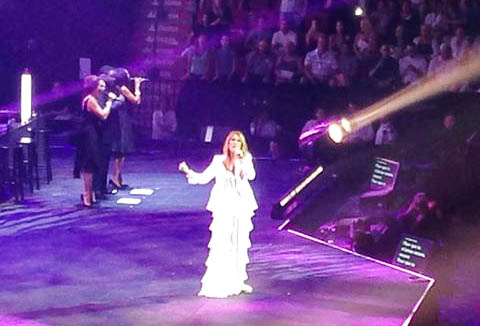 The show must go on….and did it ever.   From the moment Céline Dion  walked out on stage at the Bell Centre Sunday night, the intensity of emotions could be felt from every corner of the venue.

This was Dion’s homecoming, her debut of a 10 date run at the Bell Centre , a first since 2009 and a first in Montreal without her husband/manager René Angélil by her side.  Angélil passed away in January after a battle with cancer.  Clearly, this was very close to Dion’s heart as she fought back tears all night,  from the explosive ovation received as she appeared to the very end of the evening. She took the time to thank the fans for their kind words,  their memories of her husband and the strength to keep going.  She told the crowd that she wanted to give a strong,  emotional and happy show and that she would not leave the stage until her final note was sung.  This night was as much for Dion as for her loyal fans.

Backed by an elaborate orchestra that also included a brass section, bassist, guitarist, pianist, drummer, percussionist and 3 back-up singers,  Dion performed a repertoire of her francophone tracks including the ballad  “A la Plus Haute Branche” from her forthcoming new album.  Twenty-two of her twenty-nine song set list were French including “L’Amour Existe Encore”,  “Pour Que Tu M’Aimes Encore”,  “Ordinaire”, to “Ce Soir on Danse a Naziland” and an even a message of love with  ” S’Il Suffaisait D’Aimer”.   Her English hits “Because You Loved Me”, “It’s All Coming Back to Me” and “Power of Love” segued about 1 hour into the show and again before the end of the evening with her rendition of Prince’s “Purple Rain”  and Queen’s “The Show Must Go On”.  Of course her encore would not ignore  her monster hit from the movie Titanic “My Heart Will Go On” .

Befitting a very emotionally charged evening, Dion ended the evening with a few lines from “Vole” as an image of Dion and Angélil locked in an embrace graced the screen.

Dion’s compelling performance never waivers,  illustrating  the true nature of an “artiste”;  she brings it all and more to the stage.

If tonight gave any indication of her triumphant return home, it also proved that her heart will go on, as will the show.