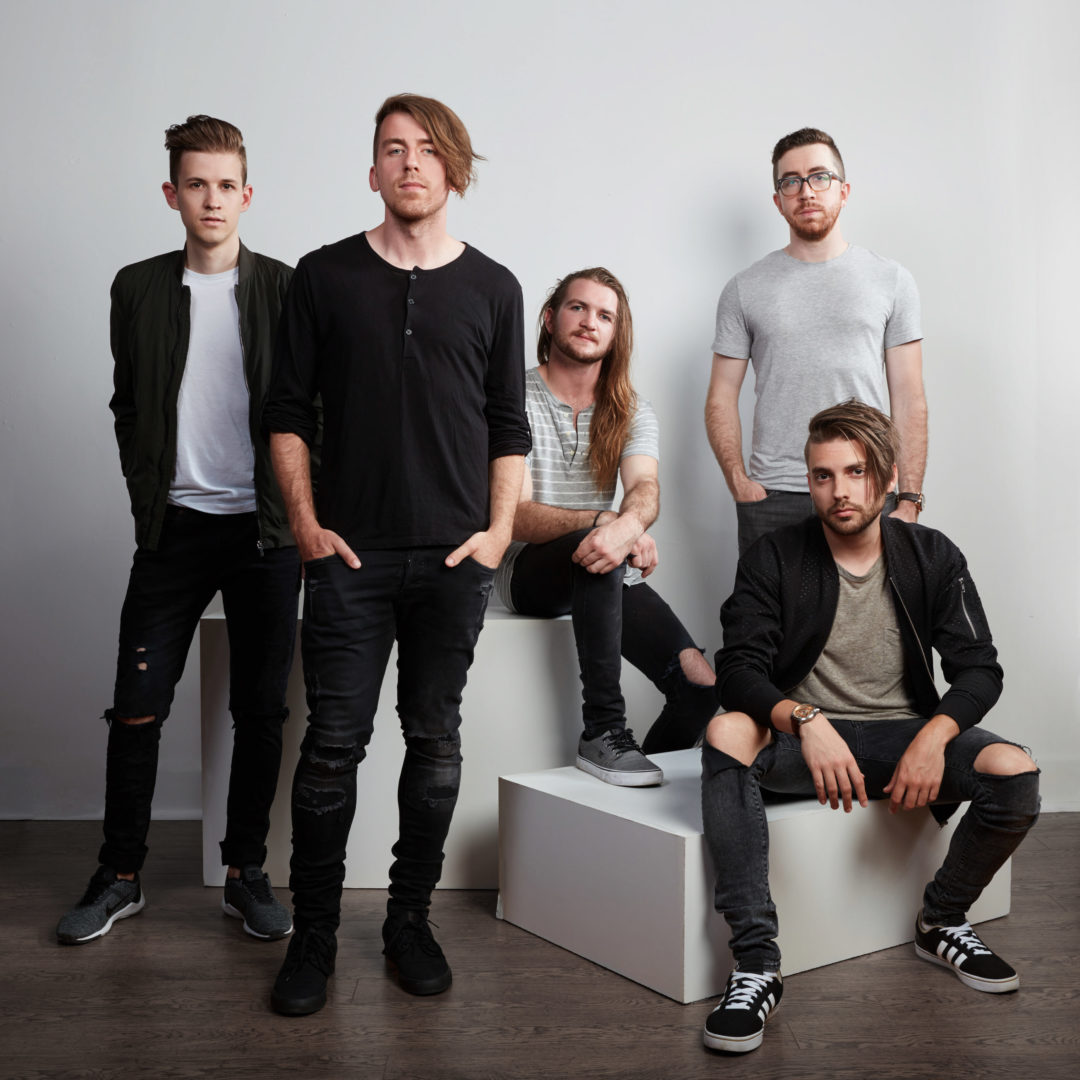 Liteyears is a five-piece pop band from Toronto including Brent and Brian Wirth, Adam Slinn, Nick Haberer, and Joey Muha. No strangers to the music scene, the boys in Liteyears certainly know how to capture the attention of their fans, with over 9,000 Facebook likes with only two singles releases off of their upcoming debut EP, American Towns. We had the chance to ask the band a few questions about their music, upcoming plans, and more in this interview.

Hey! I’m Brent and I sing and play piano/guitar for Liteyears. We’re a pop band from Toronto and we’re a few weeks away from releasing our debut EP American Towns.

Why did you decide to stray from your rock roots to pursue a more pop influenced band?

For us, the evolution from rock to pop was an organic one. I grew up loving the power and energy that comes from a guitar plugged into a Marshall stack and cranked to 10, but, overtime, I guess I grew tired of being creatively stifled by it. When you play in a rock band, it’s easy to feel shackled to the old two guitars, bass and drums paradigm all the time. After all, Jimmy needs something to do on the drums and Johnny needs something to do on lead guitar, etc. if you catch my drift? I feel so liberated not having to follow that template these days. Every song and arrangement is a blank canvas that we can paint with any sonic palette we want; be it orchestral instrumentation, electronic sounds, loud distorted guitars or all of the above. Anything and everything is fair game and, right now, that feels really important to us creatively. We’re sick of boundaries.

You have two singles released so far from American Towns, when can we expect the full EP?

The full EP is coming out on August 12th and we’re beyond excited for everyone to finally hear it!

What was the fan reaction to “Silhouettes” and “American Towns” like?

The reaction to the first two videos we released were absolutely insane! Especially “Silhouettes”. It was the first thing we released as a band and, prior to that, we hadn’t even played a show, so it was an interesting situation. We did a good job of building up a pretty substantial audience on social media beforehand by being really enigmatic and mysterious with everyone, which meant that we actually had an audience to release material to, but we were all really nervous about what the reception to the actual music would be like. Thankfully, people seemed to really connect with that song/video and the amount of people that were sharing it and engaging with us was humbling. I think we had over 25,000 views and 7000 engagements on Facebook in the span of 24 hours or something crazy like that.

Are there any upcoming tour plans in the works?

Absolutely. We’re actually in the middle of planning a full coast-to-coast Canadian tour for October right now to support the EP and our first radio-single “Rhythm In The Stars”.

What/who are some of your musical inspirations and influences?

We all come from different musical backgrounds, so our influences are all over the map. I went to university for music composition, so things like orchestral music and film scores are really close to my heart and that inspiration definitely finds its way into our music, especially in songs like “Silhouettes” and “Zeitgeist”. I’m also probably the biggest Smashing Pumpkins fan you’ll ever meet. I love how conceptual the Pumpkins were in every facet of their art. They took everything they did (ie. music, album art, music videos, performances, interviews, promo shots, etc.) as an opportunity to make an artistic statement. That’s something we really try to embrace and tap into as a band. Beyond that, we’re collectively into alternative pop bands like Coldplay or OneRepublic that have super catchy songs with lyrical substance.

Generally speaking, it’s all about melodies first. I spend countless hours on a piano or humming in my car hunting for melodies that resonate with me and get me excited. From that point, it becomes a jigsaw puzzle and the process becomes non-linear. Sometimes it’s about finding chord progressions/harmonies that really augment the vibe of the melody, sometimes it’s about finding the perfect groove to accompany it or, other times, even more abstractly, it’s about finding or creating sounds that feel truly new and exciting to us and that we can build an arrangement/production from.

Why did you decide to create videos for each track on the EP?

Firstly, to say that I love the venue (The Zoetic Theatre in Hamilton) we shot the videos in would be a massive understatement. So, any excuse to spend more time there, felt like a good one to me! Beyond that, the decision really stems from asking ourselves the question: how would we want to be introduced to a new band/artist? Ultimately, I think posting a SoundCloud link to one of your songs just isn’t engaging enough anymore. Furthermore, one music or performance video doesn’t necessarily serve as a proper and thorough introduction either. Shooting a series of live performance videos gave us the opportunity to show every dimension of who we are as a band as well as show the scope that we’re looking to operate on. It also gave us a chance to reinvent the songs with different arrangements and collaborate with so many of our incredibly talented friends. Every session was a very special and unique experience and I’m really glad that energy was captured so well visually.

Our main focus right now is supporting American Towns. We have two more videos to release from “The Zoetic Sessions” for “I Feel You In My Bones” and “Zeitgeist”, which are even bigger collaborations/productions than our previous three videos if you can believe that! We also want to play live to as many audiences as we possibly can, so the Canadian tour in October will be a nice way to kick that off. Aside from that, we’re already working tirelessly on new material. We have another EP worth of songs that are in various phases of production. I’m not sure if we’ll dive into releasing another EP so soon, but I can definitely say that we’ll be following up American Towns with a single or two pretty quickly.

At Canadian Beats we like to ask a few fun questions so your fans and our readers can get to know you a bit better:

Summer festival season is in full swing; are there any festivals you’ve been to or are planning to attend this year?

I burn way too easily in the sun and I don’t think there’s a high enough SPF rating that exists yet to prevent that, so I tend to stick to indoor concerts myself. With that said, we’re playing Yoga Fest at A Mid Summer’s Dream in Hamilton, so, pending I don’t disintegrate during our set, I’ll definitely be checking the rest of that festival out.

If you were in charge of a festival, who would be on the lineup?

I’d keep things really simple. I’d have a one-act line-up. I’d just get Paul McCartney and his band to play all day and all night and rip through the entire Beatles, Wings and McCartney catalogue.

Any piece of paper, regardless of its size, cannot be folded in half more than 7 times. Generally speaking anyways. Apparently, there are some crazy people out there setting records of 12+ times.

If you could interview someone you looked up to, who would it be and what would be your first question?

That’s a really tough question. I’d love to interview Paul McCartney. Despite all of the questions I’d want to dive into, I’d probably first ask him how he was doing to be polite!

What are some Canadian bands/artists that you would recommend to your fans?

You mean other than Liteyears haha? Hmmm…this might be a bit of a throwback response, but I think everyone should go listen to Our Lady Peace’s “Happiness…Is Not A Fish That You Can Catch” and “Spiritual Machines”. I’ve been listening to those albums again recently and they’re so incredibly good. They feel even more relevant now than they did when I first heard them growing up.

I could sincerely write an entire dissertation on how appreciative we are of the love, support and enthusiasm that we’ve received from fans all over the world even this early on in the game. But, for now, I guess I’ll have to settle for a simple “thank you”! You guys are amazing and we can’t wait to share more music with you all!

Check out their music on iTunes.