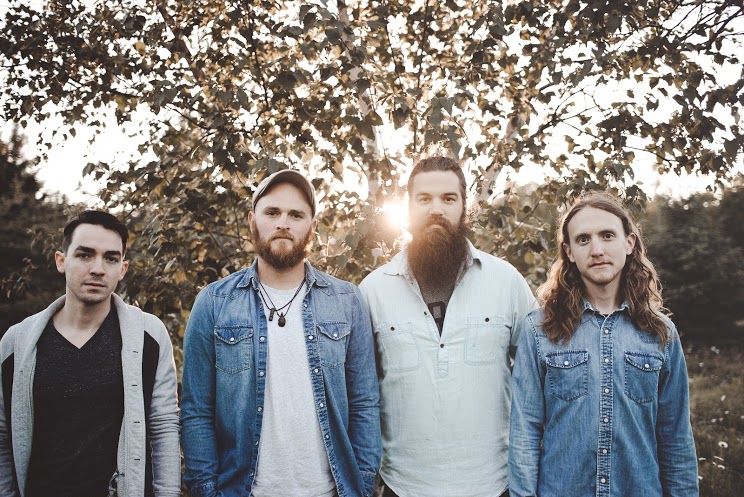 Limestone Chorus is one of Ontario’s newest Indie bands. They will be celebrating the release of Deer Friends, their first album since their debut EP (2014), with a show on August 6th at Burdock in Toronto. Want to find out more about Limestone Chorus? This interview will have all the answers.

What is it like being this close to releasing your first album?

It’s super exciting to be approaching that moment of having a tangible compilation of all of our work and creations to share with everyone. We’ve been listening to it for months and months now, making the final intricate touches, and it’s been hard keeping it a secret, keeping it all in. Now we’re ready to let it all out!

What can the fans expect from your release party?

First of all, the collection of acts on this bill is top-notch. A great variety, all with a fun, folky feel. A solid set of vocal performances. Lake Forest, the solo project of Wilderness of Manitoba lead man, Will Whitwham, will take you into dream. Shanti & Vale will still you with their perfectly interwoven voices and easing instrumentation. And A Fellow Ship will bring all kinds of excitement, as their sound, and number, expand the stage boundaries. Then there’s Burdock..a venue with outstanding sound, a very cozy atmostphere, and extremely delicious in-house brews. As for us, you can expect a full energy performance! It will truly be an album ‘release’! New songs, matured sounds, and obviously, plenty of awesome new merch!

How would you describe your sound for those who haven’t heard you yet?

Our sound is vocally and lyrically driven through the merging of three-part harmonies, laced with toe-tapping rhythms, creative cello licks, catchy hooks and folk influences.

What bands/artists, preferably Canadian, do you draw the most inspiration from?

When did you decide that this genre was right for you?

Indie-folk and its lineage is the kind of music that fills our driving playlists and happens to come out in our creations. It happened naturally more than being a decision. When you’re enjoying the song while you’re playing it, you stick with it.

What is your style like when it comes to writing; to convey a message or write tell a story?

For me, it begins with a feeling. Then if that feeling becomes persistent enough, I know it is of importance to write about. I think it’s important to convey large themes so that songs can be widely relatable. Generally, my writing resolves in optimism about an issue, as I feel that music can serve as a moment and story of hope for the listener, and for me. This doesn’t mean ignoring the darkness, but pairing it with the light. Other writing stems out of utter and complete celebration for what I’m thankful for in life. I try to describe those things using a lot of imagery, and ambiguity, so that the song can remain relatable.

How do you feel the four of you come together to form the band the way it is?

Eric Rudling really forms a strong backbone on percussion, giving us a tight and seasoned base to play with. He makes all the creative intricacies within his rhythms look so easy. Ben Goerzen uses his innate musical ear and unique cello creations to imagine complex and fitting cello and vocal phrasing in every song. Wilson Hadfield and I, Jordan Nicolaides, share in the song-writing, singing and guitar-playing duties of the group. Together, we create catchy and powerful riffs, both lyrically and instrumentally, to be contemplated, remembered and sung along. Our three voices come together to form the structure and identity of each song.

Once the album is released, what is next for you?

Outside of this Toronto show, we’ll be playing a couple shows in Ontario in August (August 3rd@ The Spill in Peterborough and August 13th @ Silver Spire United Church in St. Catharines). We will have music videos coming out over the next few months as well! Then October marks the big tour month, as we do an East Coast Tour from Southwestern Ontario out to the Atlantic and back (stay tuned for dates)!

Well we’d like to tour Out East, so we are! We’d also like to tour anywhere in the world really, so we’ll be planning for future tours after we finalize our upcoming one. Keep an ear out!

As a Canadian Beats tradition, we like to ask the artists fun questions, so here we go.

If each of your bandmates were a type of food, what would they be and why?

Eric would be a potato cause people just love his skins! Ben would be a Rambutan (ie. “Hairy Fruit”) because Beard, that’s why. Wilson would be an apple, cause his smooth sounds each day keep the doctor away. And I would be the juiciest fruit, the watermelon, cause I’m always dripping by the end of the set.

If you could form your own headlining tour, who would you include in the lineup? Why?

Well I could never imagine headlining a show with any of our favourite musicians, it would be a dream to play with our musical inspirations who I mentioned earlier, Hey Rosetta!, Said The Whale, Sam Roberts, and Joel Plaskett.

Do you have anything else you would like to say to the fans?

Thank you for listening to us and supporting our creations! See you soon!!