By Giosi Tortorici on July 24, 2016@https://twitter.com/giosimtl 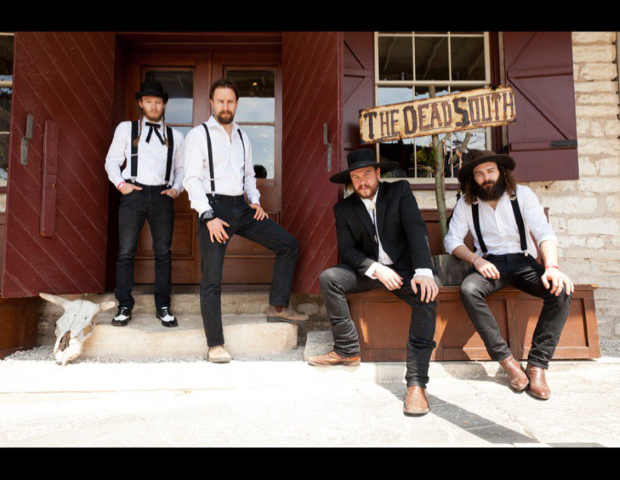 Meet Canadian bluegrass powerband The Dead South–4 friends from Regina, Saskatchewan, Nate Hills, Scott Pringle, Colton Crawford and Danny Kenyon  who are  creating a sound that is transcending a musical era through modern times.  With a list of notable accolades including  2014 CBC Searchlight Regional Winner and  2014 Queen City Rocks Battle of the Bands winner , it is no surprise that the band came to sign with Canadian record label Curve Music in 2015 and released their first full-length album “Good Company”.    Their distinctive look,  white shirts, black pants with suspenders and travellers’ hats,  only lends to their  pivotal sound. Equipped with everything from banjos, mandolins , cellos and guitars, The Dead South gets the audience immersed into a fun, kick-back and enjoy- the- music atmosphere.

Read on and get to know these 4 talented friends that make up The Dead South.

Tell us how The Dead South came together.

Nate, Scott, and Danny grew up together in Regina, SK. Colton moved to Regina after high school and met Nate through mutual friends. Nate had just started strumming guitar and writing songs, and Colton had just started to learn the banjo. They began jamming in Nate’s basement and writing songs with Nate’s roommates. For the first few shows of the band’s existence, it was more of a traditional rock band setup (electric guitars, drums, etc). However, after these first few shows all band members moved away from Regina with the exception of Colton and Nate, who continued to write and play as a duo at local open mics. Danny and Scott eventually joined the band, securing the current lineup.

The four of you have different musical backgrounds & tastes, how does this blend together?

For the most part, we all grew up listening to punk and classic rock, which formed most of our early musical experiences. Colton is an avid metal fan, Danny is a classically-trained cellist, Scott enjoys the singer-songwriter genre and Nate is just a mess, he’s all over the place. We all got together and tried to play Bluegrass, and we failed miserably, but the result was what we now call The Dead South.

You have your own unique take on the Bluegrass/Folk genre, was this the direction the band was always wanting to take?

Bands like Trampled By Turtles and The Devil Makes Three inspired us early on, but we really don’t set out to write a song that sounds like this or like that. The Dead South is really just what happens naturally when the four of us get together to jam.

Take us through a typical songwriting collaboration between the four of you.

One of us will typically come to a jam session with what we call the Bones. This is usually a chord progression, a riff, a chorus, something simple, just an idea, really. Then we’ll all mess around and each of us will add some Meat to the Bones. We’ll mess around with different ideas for verses, chorus, song structure, etc. until we’ve got a full song. Once we’ve written the full song, we play it as much as we can – we practice it alone at home, in jam sessions, and try it out live to see how it feels. During this time the song will go through a lot of little changes – we’ll try ending it here instead of there, we’ll switch a chorus out for a bridge, etc.  It usually takes a few weeks or months (depending on how often we play) to really lock down a song. Much like goldfish, they go through many little changes during the first few weeks of their lives. Once we’re happy with the song, we ceremoniously add the Skin and it becomes a living, breathing thing, completely beyond our control.

Playing overseas brought opportunity to sign a record deal; what has been the difference (if any) between European and Canadian recognition of your music?

The first time we toured Germany, we were struck by the audience reaction to live music. In North America, you’ll typically play in a loud bar where everyone is talking, drinking, having a good time during the show. In Germany, the crowds are very quiet and attentive during the performance, which took a little getting used to. In Europe, it seems more part of the culture for people to go see live music, whereas in Canada live music seems to be more of a niche market.

Good Company was remastered and re-released along with a bonus track…and you have embarked on your Canadian tour. What do you hope fans will experience from your music?

At Canadian Beats, we love to ask some fun questions so our readers can get to know you better.

Describe each other in one word.

Does anyone have any interesting pre-show rituals? Superstitions?

We try to ritually sacrifice something before every show, but it’s easier said than done. There are only so many hours in a day, you know.

If you could tour with anyone / band, who would it be?

Thank you for your time. Best of luck with the album and enjoy the tour!