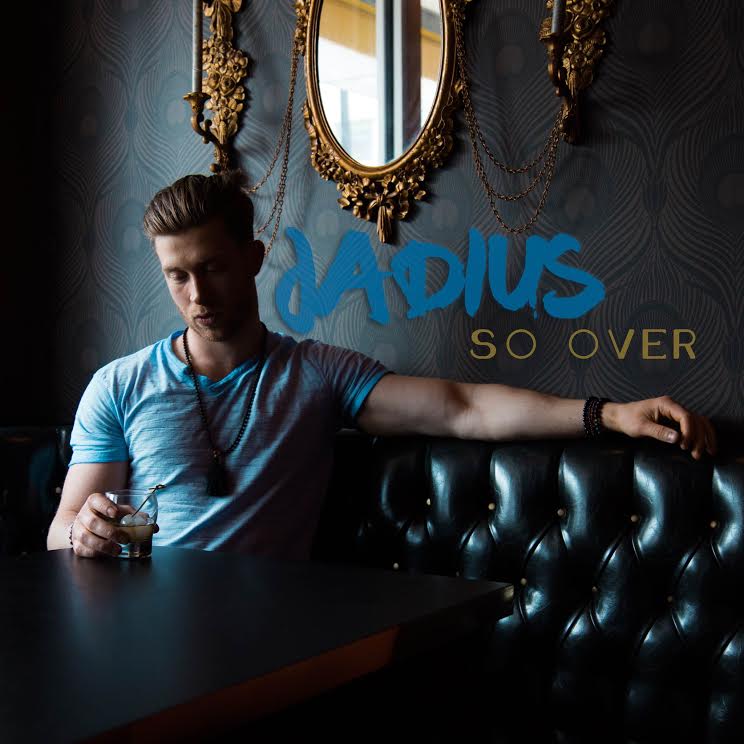 Jadius, also known as Justin Sheppard may be a name you’re familiar with. He is the former frontman of Fur Eel, as well as a current member of The Bureau and The Pile of Bones Brass Band. The Regina, Saskatchewan artist has just released his next single “So Over”, through SAV Recordings/AWAL. Listen to is above, and if you like what you hear, head to iTunes and grab your very own copy. We had the opportunity to ask Jadius a few questions about the single, his music, and more in this interview.

Hey! I’m Jadius (call me J if you like). I have an obsession with pancakes and waffles, don’t let my 24 pack abs fool you. Haha.

You have just released your new single “So Over”, can you tell us about the writing process behind it?

This one came together very naturally in both writing and production of the record. I wrote the chords, melodies, lyrics and came up with a pretty solid arrangement one day on my Telecaster. I was inspired by the intense feeling of not being able to move on from something that had happened to me. Then Rob(bass) and Ross(drums) came into the mix for the pre-production sessions where we collectively came up with the spacious intro and the psychedelic outro. All the drum and bass parts were honed during the pre-production prior to the recording session. All the guitar solo’s and synth work I wrote and recorded in one session at my studio. Actually, this was one of the most magical guitar recording sessions I’ve ever done. All parts flowed forth with zero effort or pre-meditation, I really feel like I was channeling the spirit of Jimi Hendrix on this session. Then I wrote and recorded all the harmonies and vocals myself at the studio.

Who are some of your musical influences and inspirations?

I think I wear a lot of these influences on my sleeve. I’m endlessly inspired by Prince, Jimi Hendrix, David Bowie, TV on The Radio, Bonobo and Anderson.Paak. I also draw inspiration from Bruce Lee, that guy is just such a badass.

Do you have any other new music in the works?

Lots. I’m obsessive with my music, I’m writing or recording something every day. I’ve got a few EP’s worth of new original material that is recorded and ready to be mastered plus countless demos that I hope one day get the full album treatment. Outside of my solo work I’m also writing and recording a hip-hop album with The Bureau and Queen City Stoop Kids.

How does “So Over” compare to your previous releases?

I don’t think you can even compare them, it would be like “Comparing Apples to Oranges” kind of thing. My debut EP last year is electronic pop. I love that kind of stuff. But I felt like I’m capable of expressing myself the best with music that is centered around guitar and a band, and not a perfectly quantized beat made in the computer. What you are hearing on this new record is real, nothing is quantized and I can honestly say there were hardly any edits done to anything. Real human beings with character and rawness instead of the canned heat of my last EP.

How do you manage to combine so many different aspects of music such as funk, R&B, soul, rock and hip hop to create your own sound?

I don’t really know how I manage! I guess funk, soul, R&B and to a certain degree Hip Hop are very similar in chord selection and vibes. All of them make you bob your head or tap your feet, so I guess the rhythm is really influenced by those genres. I think rock finds its way in as I like to get heavy, nothing beats an electric guitar for me. I like acoustic, but nothing compares to the feeling of electricity coursing through my body with my tele and an amp. Hip hop finds its way in more-so in the vibes and attitude of the music, I’m not a rapper by any stretch of the imagination.

Adventurous Pop Music. Basically, my songs are very pop but they go on tangents or adventures instead of sticking to run-of-the-mill Pop song structure. My music is not afraid to try something unconventional, like an extended intro or the song ending way ahead of where it “should” end. Things coming up on the horizon: Fall tour dates across Canada to support the release of my new EP, music video, recording live cover videos for my Facebook page, and continuing the never ending cycle of writing and recording.

At Canadian Beats we like to ask a few fun questions as well, so your fans and our readers can get to know you a bit better:

We are now into summer, what is your favourite way to beat the summer heat?

My studio is air conditioned haha. But if I must be outside I’ve discovered that water is pretty awesome for this sort of thing.

Most of the people I want to see in concert are dead now, I suppose if Hologram Tupac happened I could bring in other hologram artists too. But of those great artists still with us, I think J-Fest would have appearances by Anderson.Paak, TV on The Radio, The Internet, Bonobo, Arcade Fire, Brian Culbertson, Chic/Nile Rogers, D’Angelo, Daft Punk, Drake, Eminem, Foo Fighters, Janelle Monae, John Mayer, Kanye West, Kendrick Lamar, Rhye, Skrillex, Thundercat and if I had holograms: Hologram Prince, Hologram David Bowie, Hologram Jimi Hendrix.

I’ve seen all the James Bond movies and do a badass Sean Connery impression. That’s a fact.

If you could interview anyone you looked up to, who would it be and what would be your first question?

I think I would ask the same question to any one of my heroes: “What is your biggest piece of advice, or what has helped you the most with conquering fear and doubt”

Kaytranada is putting out some of the best music I’ve heard in a long time, from anyone. The sonics and the writing are just insane, and he’s got some amazing features on his new album. Of course Drake and Bieber are killing it. I’m a fan of Marianas Trench too, those guys make great records and write great songs. Saskatchewan has some of the best musical talent on the planet, so I can’t answer this question without mentioning The Dead South. Hands down one of the best live shows and these guys write incredible songs. Canada is also home to Jocelyn Alice, Megan Nash and Reignwolf…all worthy of your time!

Hope to see you enjoy the music and I look forward to seeing you out at one of the shows this Fall!