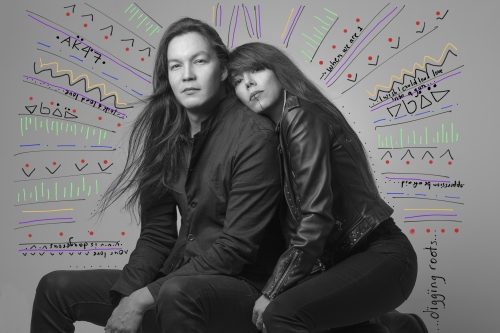 Digging Roots is duo made up aboriginal artists ShoShona Kish and Raven Kanataka. This husband and wife team met while both were students auditioning for a music festival in 2003. Since putting out their first album, Seeds in 2004, We Are in 2009 and now For the Light in 2016, all three have been nominated for a variety of Canadian awards.

For the light opens with a strong steel guitar playing pop blues tune “AK47”. The track, “Hwy 17” is a tune with steel guitar backing Raven’s strong voice that won the Cobalt award prize at the 2016 Maple blues awards.

Digging roots have been called aboriginal alternative singers with blues, pop and R&B mixed in. This 13 song album features all their styles. Raven with her sweet smokey voice is featured on “Time has come”, “Stay”, “I’ve got it bad” and “Clumsy Lover”. These four songs are slow blues tunes that hint to Billie Holiday. ShoShona’s voice is featured on a country blues tune “Sunshine”. He also does a cover of Bruce Springsteen’s “Cover Me” a slower acoustic steel guitar version.

ShoShona and Raven duet on “Rich Girl” an up tempo Reggae beat song, as well they do two blues infused duets   “For the Night” and “I is we”.

Two of the songs, “It won’t be long” and “All Night” are pop rock songs with ShoShana on lead vocals.

This well rounded album is a strong third release for the duo. In their short time together Digging Roots have traveled across Canada, U.S., Mexico and Europe. Just back from delighting crowds in Australia, this duo is touring the Canadian summer festival circuit on the strength of For the light.