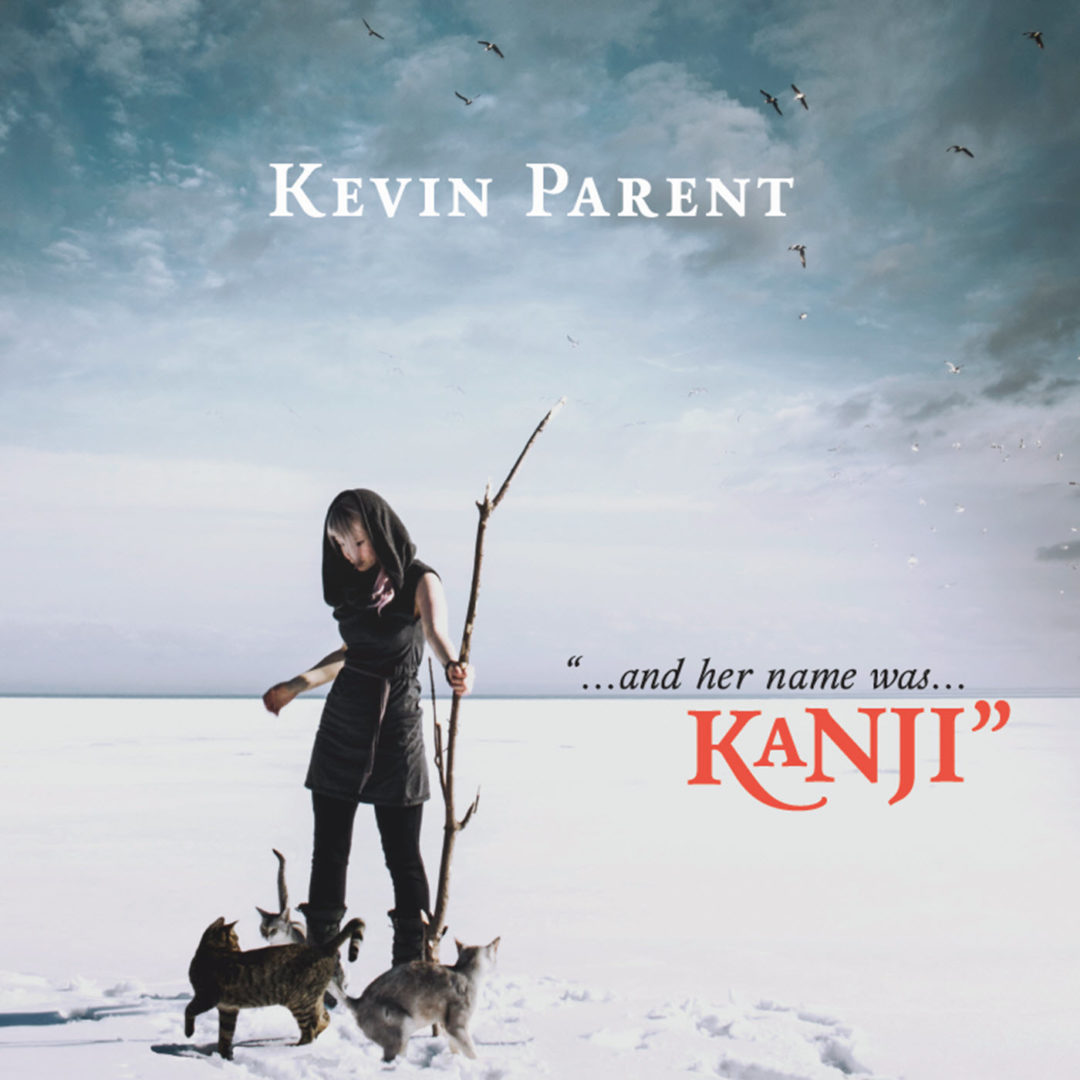 Based on the cover art, which is daringly striking, listeners may expect a Swedish Death Metal album or a modern recording of ancient lute tunes, based on a lone, asymmetrical white-banged hooded woman, holding a long tree branch as an obvious clerical staff, conversing with, or controlling, a small heard of cats, in a snow scape landscape, with the italicized title “…and her name was…Kanji” (Kanji in all caps red font with a slightly smaller “A”)  boldly framed to the side, Canadian Geese flying in the distance.  Clearly this is Kanji, a sublime, mythological woman who is going to be earnestly explained and musically discussed.

The album opens with “Honey, I’m Home” a bold blues style rock tune introduced with angelic, ambient vocals.  The groove is steady with quiet intensity depicting the building rage of the narrator which listeners would expect to open into a full rock song at the chorus but, instead, suddenly pulls back, the waves of emotions ebbing and flowing.   Lyrically, “Honey I’m Home” delivers a few raw explicit deleted language usages not usually associated with a blues tune, even if it deals with heart break, loss, and revenge.  The unnerving lyrical punch puts the audience on their attentive guard, a little shaken, not sure where exactly this tune, let alone the album, is going to go.  The chorus, when the narrator simply states “ in my dreams / you come knocking at my door / begging for love and forgiveness / wanting us to be like we were before” is in direct contrast to how the narrator, if needed, can “kick his face in” of “that arrogant snob” who has interfered with this couple’s harmony.  A creative mix of musical style and lyrical substance creates an inquisitive tone for the remainder of the album, a question of musical and lyrical direction.

“A Thousand Galaxies” answers with a cleanly played instrumental opening, a mix of country and rock, displaying a sing songwriter who is not afraid to draw on his own personal musical preferences, smacking of Warren Zevon in vocal tone and phrasing, sung lines with a slight, off tune fall, a slight vibrato with a lackadaisical delivery.  This song could be an extra track on “Excitable Boy” after “Lawyers, Guns, and Money” with updated production.  Guitar sounds are distinct and clear, every riff and lick clearly heard, intertwined and tastefully arranged.  Right when the song is about to break into a big middle instrumental section, it ends instead, displaying the strength of the songwriting not needing to bribe a listener in with extra sections or drawn out choruses.

The next track “Hand to the Sun” is a fuller sounding Warren Zevon sings over an open rock tune, with distinct vocal and instrumental lines.  The tune opens with ambient air sounds going to a lone, Enno Morricone movie guitar riff.  The rest of the tune is gritty and tough, a soundtrack to a bare knuckle fist fight in the desert of a briefcase full of an undisclosed amount of money.  Nice high range playing in the bass line over the steady pulse of the drums.  “Hands to the Sun” Closes with the air effect which is a great opening for the next song “Kanji’ which is either going to be a heart-broken love song, or a Swedish death metal tune, as previously mentioned based on the cover art.

“Kanji” evokes Hawksley Workman with the opening recitative vocal deliver and lyrics such as “take me to the nearest shrine / where can liberate my mind / my mind is filled with broken dreams / time for a change” into a straight ahead moderato tempo tune where their ‘hearts beat in time.” Amazingly creative non-lyrical, but syllabic based, vocal lines create an ensemble sing along with non sequitur vocal sounds.  “Kanji” is a modern retelling of a song of olde (with an “e”) with musicians wandering the countryside to play late night fire parties before picking up camp to move the next morning.

“Brother” speaks to memories of growing up, the rooted tree trunk a symbol of connectedness:  “we used to swing from the same trees […] and go seek comfort from mother […] Jeni Smith’s long blonde hair / now that was beauty”.  Emotional divides created by differing ideologies creates separation as “the more we swing form the same tree / our roots are torn and so are we / and as we bleed on different sides / mama’s gone while Jeni cries”.  The poignant question is put forward “does this make sense to you?”  Taking a tragic turn, listeners hear the true extent of the divide, and the outcomes it produced.  How many of us have had true, loving relationships torn apart by ideas which, at the time, seem important, but, given historical perspective, aren’t?  Nice use of clean guitar and sparkling piano, accompanied by a roving bass line covering all various tonal ranges and sounds.

The last three alliterated titles tracks, “Torturing Me”, “Time Can Heal”, and “Together As One” wrap the album nicely with three distinct, well-sequenced tracks.  “Torturing Me” is a big rock song, full electric sounds cut with a strummed acoustic guitar, a song Red Rider could record for a reunion album if they were updating their sound.  A cool instrumental break down allows Parent to evoke his inner Steven Tyler over a Talking Heads Afro-influenced rhythm.   “Time Can Heal” is a vocal combination of Warren Zevon’s tone with Hawskley Workman’s half soft spoken, half sung delivery and phrasing.  This song is an open, spacious melody, a gentle spring rain cleansing the after effects of a long winter.  “Together As One” closes the album with an reflective positive message of unity and connectedness.  Directly stated, this solid tempo tune discusses togetherness through clarity of vision, a positive message regarding the strength of human emotion in a well-arranged, tastefully performed song.

Kanji, by definition, are Chinese characters, ideographs later adapted by the Japanese, where the character as a whole represent meaning, not just the sound of the character.  Kanji, the album, can be described the same way, an album to be appreciated as a holistic listening experience.