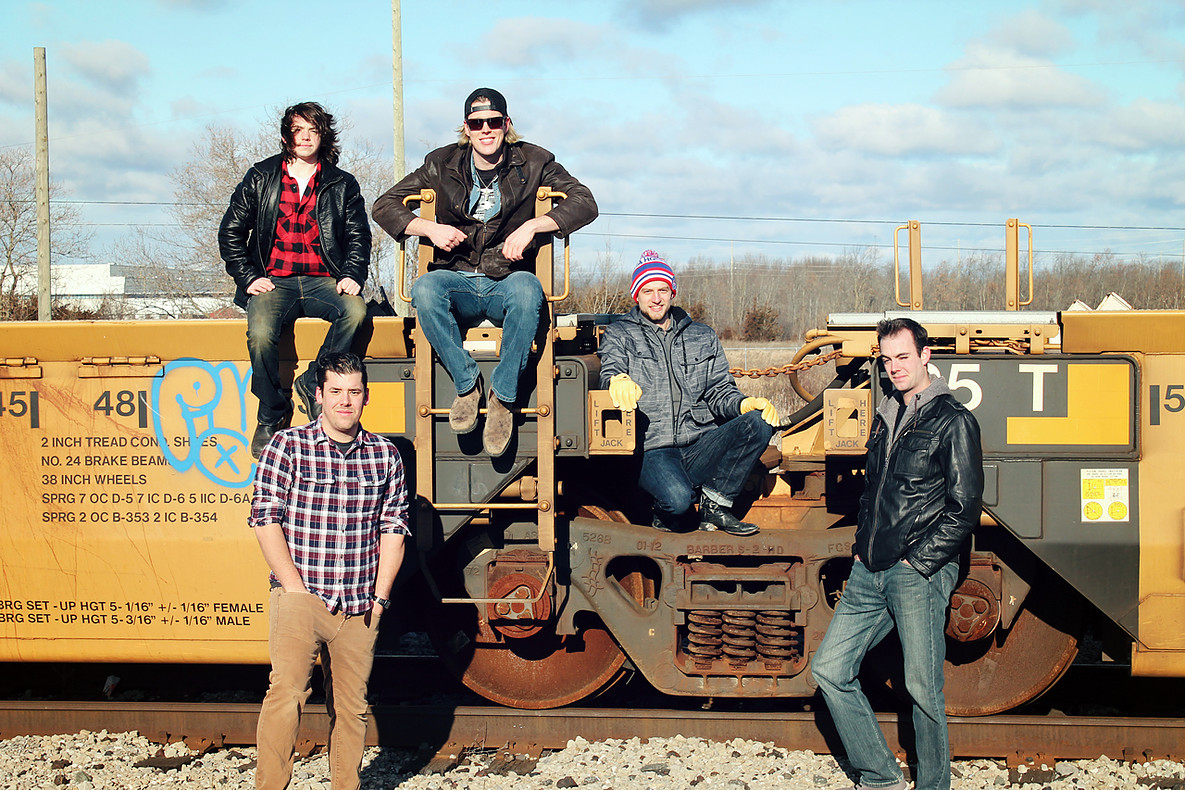 South of 7 has released their debut EP. With the band’s debut single, “Go On, Go On” making rounds on YouTube and being shared by their fans on social media, South of 7 has been carving their name into the Canadian country music scene since their forming in early 2015. With the talents of the bands five members; Josh Bourbon (Lead Vocals/Rhythm Guitar), Jordon White (Drummer), Alex Bowes (Lead Guitar), Ben Bryan (Banjo/Mandolin/Lead/Rhythm/Guitar/Slide/Cowbell), and Will Dudgeon (Bass), South of 7 is taking the best of country music and fusing it with their own unique modern day musical twists.

Between hometown gigs, festivals, events, and opportunities to open for some of Canadian country’s best, South of 7 has found the time to write and record their six song EP. Bourbon is the frontman and songwriter of the group. Using both his knowledge and love of music to create his own unique songs and sounds, Bourbon told Canadian Beats how the idea for the EP came to be; “We had the amazing opportunity to open up for Deric Ruttan in front of a few thousand people, and then again for Brett Kissel on his Airwaves tour. That really opened my eyes and made me want to get to the next level. That is when we decided it was time for the EP.”

“The band started out as a bunch of scattered dudes who just loved to play music. We all came together to play and before we knew it, it was the start of South of 7.” explained Bourbon. Sometimes one of the most difficult things to do as an emerging band is to cultivate a band name. “Being from Belleville, Ontario there is kind of an unwritten joke about being from the north and being from the south side of 7 (Highway). We played a lot of bars on the south side. Before we had a name, we were playing a gig one night and my opening joke was about being happy to play on the south side of the 7, and someone in the audience shouted “Yeah South of 7!” We decided right after that it would make a pretty cool name.”

“When I started playing guitar, I started to play because I just really wanted to play. My dad played guitar and he passed away just before I started learning, so he was never able to hear me play. I really wanted to learn “American Pie” because it was his favorite song. It evolved from there, playing more and more of your classic country songs.” tells Bourbon. As the songwriter, Bourbon touched on what his process is and how he cultivates his own musical material. “I had a falling out with a girl who was pretty prominent in my life. I had never written a song, and I was at home in the summer. I told my mother I was going to write a song and she told me to go ahead and do that. I sat down and wrote the song. It took me a few hours because I just got lost in the emotions. When I finished it, it didn’t sound all that bad, so I started writing more and more. I quickly learned that you cannot fabricate a good song and that some piece of the song has to be about something that you’re experiencing or have experienced. I feel I have grown a lot since my first song, and writing quickly became one of my daily passions, even if it is something like writing about the pencil in my pencil holder. I walk around with all these notes and wads of paper in my pocket all the time. Slowly and surely this has led to our first EP.”

“The Eagles were non-stop the biggest influence on me throughout my childhood. My dad introduced me to some classic country like Gene Autry, and ranges all the way to George Strait and Travis Tritt. Even right now, Sam Hunt influences and inspires me. Hunt is a lyrical genius. My favourite song right now has to be “Single for the Summer,” the lyrics blow my mind. The imagery that Hunt creates is amazing.” Bourbon explains who some of his biggest musical influences are and who has inspired him to be creative.

The debut single for the South of 7 EP, “Go On, Go On” was written by Bourbon. “The song was originally supposed to be a slower heartbreak song, with an acoustic ballad sort of feel to it. Before we knew it, it turned into this New Country/Rockin’ boot stomper” tells Bourbon. “We love playing it live and the fans can’t get enough of it.” With events, festivals, and fundraisers lining up the summer season for South of 7, they will be busy promoting their EP, entertaining audiences, and cultivating new fans.

Make sure to check out South of 7’s EP Release – Barn Party if you happen to be in the surrounding area of Stirling-Rawdon, Ontario. Meet the guys of South of 7, buy a t-shirt or cd. The band has even issued an “Old Truck Edition” of their EP which will be released on a cassette for those who are still “rollin’ in classics!”