By Remington Fioraso on July 2, 2016@https://twitter.com/RemingtonFD 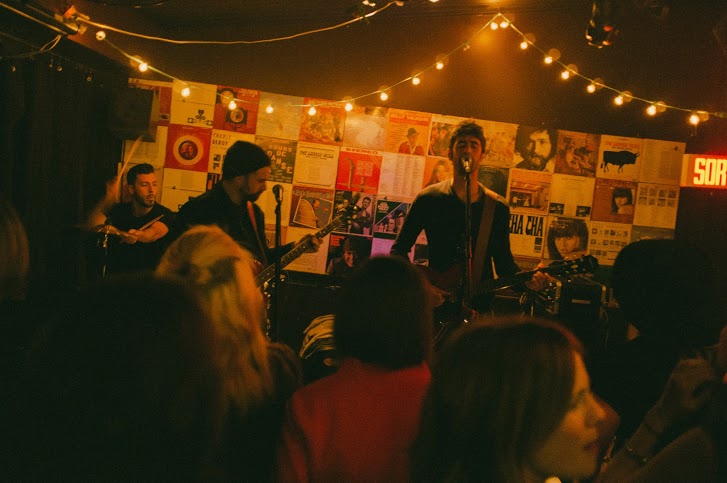 Montreal’s The Moonlight Club released their debut release, an EP, Words in Gold in October 2015.  I had the chance to chat with Francois Royer Mireault (FRM) and Frank Rousso (FR) and John Pankert (JP), continue reading to find out more about the band below and connect with them on their social media pages!

FRM: We’re a Montreal based alternative 3-piece rock band. We like to combine 60’s jangle pop, 80’s punk and a bit of Americana. We’re 100% independent and we aim to inspire people to pursue their creative projects, that’s why use the band as a way of collaborating with our friends: artists, photographers, DJs, writers, etc.

FRM: One interesting thing about influences is that we rarely discuss them and we would not agree on a top 5. We all have very different record collections and we all try to add a different flavor to the mix. It’s safe to say I aim for jangly pop and Americana, John grooves on classic rock and modern indie while Frank brings a bit of punk and some obscure indie. We are 3 musicians with very different musical background but we see it as a huge advantage over our process to create music.

FRM: Originally, we all grew up in a small town between Montreal and Quebec known as Trois-Rivières. We met years ago through snowboarding, skateboarding and goofing around. We reunited in Montreal after we all moved here for work and new adventures.

What inspired your band name, The Moonlight Club?

FRM: This is a tricky one. I had a mysterious note in my cellphone labeled “The Moonlight Club”. I remembered it as kitsch bar I saw in New Orleans. We liked the imagery of it and the double entendre with the fact that we are moonlighters – we all have day jobs. Six months laters, I realised the reference came from a book: The Moonlight Club was in fact a London club that hosted bands like Joy Divison and The Specials in the 80’s. We kept it anyways.

How was the recording experience for Words in Gold?

FRM: Pretty much like a punch in the face. We had no idea what we were doing. I got in touch with David Smith after seeing his name on the back of an Elephant Stone record. We bootstrapped a dozen of demos in our rehearsal studio and then recorded 5 songs at Breakglass Studios in about 4 days. We recorded on tape (analog) playing live in the same room. I spent about one day adding guitars and the three of us jumped in for back vocals (hat’s off to Cedric, our friend and drummer at the time of recording). It was quite raw and organic because we had no time and no experience. We loved it!

Whom, or what, were the inspirations for the tracks on Words in Gold?

FRM: Most of the tracks I’ve written came from a period between 2010-2013 where I had just moved to Montreal and was trying to figure out how to live like an adult – escaping city’s life, finding a way to make a living, friendships, dreams, goodbyes and a bit of love. Listening to The Kinks, The Byrds, The Stone Roses, The Smiths and Neil Young helped me figured out how to arrange the songs.

JP: Writing You are was a bit more introspective. Looking back at a lot of experiences and regrets and trying to make sense of it all.

Do you have any favourite songs off the recording that are your favourites to perform?  Why?

Words In Gold, because it’s the first song we played as a band and has clearly defined our sound.

You are. The dynamic range also gives chills every time and indeed, John’s voice is sexy.

Never Nothing Wrong, acoustically – it’s an anti-hero and quite different from the rest.

We have two new songs that are also extremely fun to play live: Black Two Sugars, A Little Too easy. You’ll have to come see us play or wait for an album to hear them 🙂

For those who have yet to see play, how would you describe your live shows?

FRM: Quite loud. A bit messy. We like it to be a party. We like our shows to be reunions where people meet, exchange, dance a bit and leave inspired to create their own thing. That’s what the band is all about. We also like to complete the program by inviting artists or DJ friends.

FRM: Play around Montreal/Quebec and finalize demos for an album coming out in 2017. We also want to push new art projects with our friend Olivier Charland, who designed our EP’s cover.

At Canadian Beats, we like to include a section of questions to help fans get to know more about you.

FRM: Something to write things down: either my phone or a pen and paper.

If you could travel anywhere in the world, where would you choose and why?

FRM: Probably because I have a huge sunburn right now – Anchorage, Alaska.

FR: I got really excited when I think being surrounded by nature in New-Zealand.

JP: Sri Lanka and Berlin. Going to the beach on an elephant!

Who was the first concert you attended as a fan?  What about your last concert as a fan?

FRM: We’re from Montreal so on top of playing music, we like to eat, drink and go out during the few weeks of Summer we have. We just come back from a road trip in Maine that was all about surfing, eating lobster and singing French songs from old Quebec’s bands.

JP: Biking. It’s really nice to be able to experience the city with that much more freedom.

FR: Summer in Montreal is where the magic happens. Just add a BBQ, some baseball gloves, your greatest friends and you’ve got, in my opinion, the perfect summer activity.

FRM: Thanks for reading! Playing music is just a way of opening ourselves to other interesting people. If you want to collaborate, invite us to play and share something with us, say hit at moonlightclubmtl (at) gmail.com, we’re friendly 😉