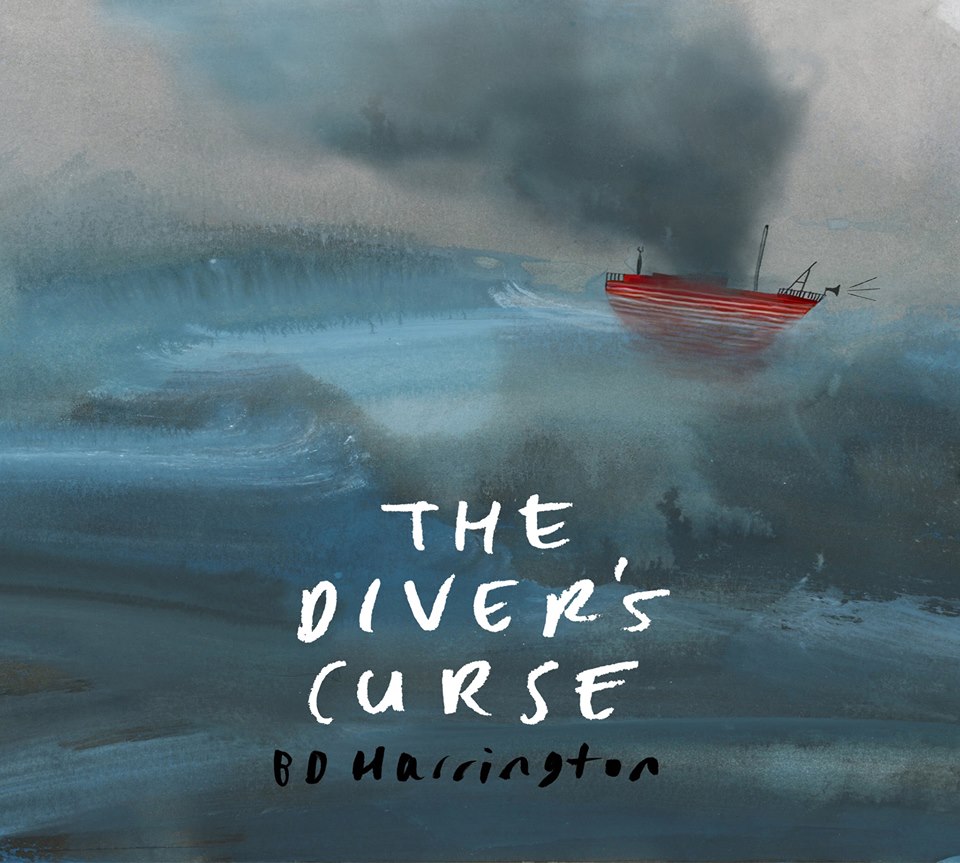 If Nick Cave, Lou Reed, Bob Dylan, Don McLean, and the Weakerthans formed a super group like the Travelling Wilburys, with Leonard Cohen producing instead of Jeff Lynne, and focused on sea shanties about ghetto living in the 1950s, you would have a respective sonic start to BD Harrington’s The Diver’s Curse.

“Ride Black Waves” is Nick Cave and the Bad Seeds becoming streetwise, steamed pavement pirates.  “Ride Black Waves” needs to be featured on a David Fincher urban gangster movie following a blacked out stretched Cadillac as it trolls the darkened, moonless night streets at half speed switching to slow motion as it passes potential threats as in rivals or police.  The anaphoric use of “Bring you’re….and you’re…..you’re” perpetuates the sea shanty rhythm mixed with the brooding shrugged shoulders of broad personalities and winced looks.  Before the song ends, someone is chased down and beaten, again in slow motion, left bleeding on the curb as the Cadillac’s taillights disappear in the distance.

Lyrically, the album delves into personal discovery and reflection, narrators’ attempting to navigate their respective lives’ courses without a proper compass.  In “Boxers Hit Harder” listeners can imagine a lone, punch drunk bruiser, looking out from a captured moment in a tattered, black and white photograph, sitting in a nearly empty room save for a bottle of whiskey and a harsh hanging lightbulb, a weakened fighter who cannot bring himself to go on without an excuse to “hit harder.”   As the song plays on a large, felted speaker radio, a question slowly sneaks forward like a kicked-cat, “Do boxers hit harder when women are around only in the ring, or in their daily lives’ as well?  Could this part of the reason there isn’t a woman around?”  The Divers’ Curse navigates the emotional, dark watered depths of loneliness, lost love, and lingering longing.

Many of the songs on The Diver’s Curse start with gentle guitar and almost whispered vocals as though Harrington is drawing the listener closer, preparing to share a single secret drawing the audience into a sacred storytelling space.  Sonically all the instruments have a lush, rich sound throughout the album.

The piano and cello opening of Contamana is one Tom Waits would be proud; one almost expects his growly, belting voice to deliver the first line.  Harrington’s voice is instead gentle yet yearning, a introspective, reflective melody combined with the stark imagery of “the darkest hole you will ever see / is kept inside a funeral wreath / when you tasted my blood / where you chasing relief.”  The breathy vocal delivery punctuates the question how one could “steal another man’s breath.”   A quiet mandolin offers a shimmer of hope, and the echoed piano evokes memories and questions and the honesty ensued in the thickest reaches of the night, to “wait here alone on the riverside to “close my eyes and whither.”

“Sleepy John” vocally evokes the tone of Lou Reed, the phrasing of Bob Dylan and the lyrics of Don McLean. The phrasing and delivery of lines such as “where you known by the truth and emboldened by your prayers / do you even care / what’s going on here / where you commit / before you disappear” could come before “everybody loves me baby / what’s the matter with you” on American Pie.  The string line politely nods at the bass line from Lou Reed’s “Walk on the Wild Side” while the close-to-mic vocal delivery is a nod to Leonard Cohen and a less-creepy, albeit poetic, Joseph Kerschbaum.  “One Match Left” has Cohen-esque phrasing and arrangement, with sparsely used instruments and a single-note picked guitar part evoking a modern, troubadour effect.

“Nightingale Lane” is bluely romantic, a slow couple walking through a Van Gogh bright, but cloudy night.  “In Your Arms” speaks of resolve, and failure, and trust, and the strength one person can create for another, a haven to slowly heal one’s soul.

“Resusci-Anne”, “Apple Cart” and “Early Morning Eye” is reminiscent of the Weakerthans, or the Weakerthans’ collective older uncle.  This song could be the bonus track from Lost and Leaving, musically and lyrically, and vocally reminiscent of John K. Samson in Harrington’s higher, more open range.

“Little Birds” closes the album starting with a deep breath before a low sung first line, harmonies and bells create a modest sense of hope for this folk based lullaby, wine-heavy eyes slump as one head is placed on another’s shoulder.

BD Harrington’s The Diver’s Curse is quiet and reserved, urgent and personal, a soft-spoken, romantic malcontent sharing his secret stories.