By Remington Fioraso on June 25, 2016@https://twitter.com/RemingtonFD 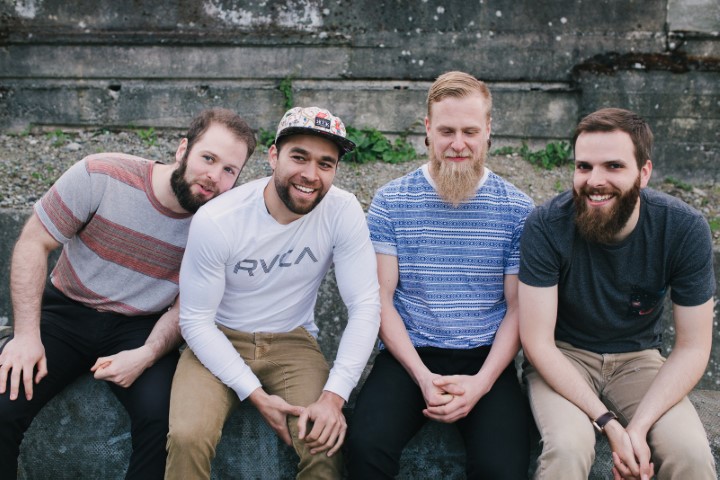 I had the opportunity to ask questions to Nanaimo’s Gold & Shadow regarding their new album, Birdhaus and Western Canadian tour.  Be sure to pick up a copy of the EP and check out their social media pages below.

Hi! It’s Dane from Gold & Shadow, I sing and play guitar and synth and write a lot of the songs.

We met in a basement below a coffee shop after a church rehearsal, where we began to create some very loud and long-form post-rock that was typical of our earlier material.

Radiohead always, and recently a lot of Canadian artists like We Are The City and Dan Mangan + Blacksmith. On this new EP, you’ll also hear influence from artists like The National and Half Moon Run.

Whom, or what, are your inspirations when writing tracks?

Lyrically, “Birdhaus” really focuses on the anxiety and disconnection of modern life. When writing, I found a lot of inspiration in the Old Testament, where I saw the circular patterns of my technology-addled mind paralleled by the wanderings of ancient Israel.

Musically, we were all very inspired by our good friends in Morning Show, a Victoria band that made an incredible debut EP called “Prom Theme”. Their ability to say so much in under 4 minutes (and with a very mature subtlety) was inspiring and challenging, and really guided our process for “Birdhaus”.

How was the recording experience for Birdhaus?

Easier, faster, and more enjoyable then ever before! We worked with Tom Dobrzanski (The Zolas, We Are The City, Said the Whale) at Monarch Studios in Vancouver, and laid the majority of everything down in 2 days, live-off-the-floor. The rest (mostly vocals) we did in my apartment in Nanaimo. We recorded from February to April, and now we’re releasing in June! Crazy.

How would you compare Birdhaus to TORCH? What are the most significant differences?

We tried to write more concise songs that got to the point quickly, and also showcased some new sounds (like synthesizer, and some found-sound interludes). “Birdhaus” also plays through as a whole very nicely, whereas we felt TORCH was a little scatterbrained towards the end (probably because it took us 2+ years to record it…)

Where have you seen the most growth?

Over time we’ve learned to play less and make more space for each other. I think on this EP we did those things better than ever, and as a result the mixes are cleaner and results more punchy and satisfying than ever.

Are there any songs in particular that you are excited to showcase to fans live?
“Judges” is the danciest thing we’ve ever made, and we’ve been trying to make dancy things (halfheartedly, because slow songs come oh so much easier) for a while… excited to see the audience response!

For those who have yet to see you, how would you describe your live shows?
We’re loud, and we have a lot of fun. Probably our #1 audience comment is “it sure looks like you’re having fun up there”…. we are. It’s great! We very much enjoy each other’s musical (and non-musical) company.

At Canadian Beats, we like to include questions to allow fans to get to know you a bit more.

What led you to begin pursuing music?
I was in classical music lessons for a long time, but I’d always wanted to form a band, and it was probably my discovery of 60’s and 70’s rock at a young age that made me want to make this sort of music so badly. The feeling I got from listening to a truly great, classic album – I’d always wanted to create that sort of thing for other people.

What are your favourite things to do around Vancouver Island on your downtime?
Kayaking and swimming are favorites. We have an incredible river just south of Nanaimo which offers the best summer swimming, anywhere… and we take full advantage of it.

Do you have any guilty pleasures?  If so, what?
Drake. Sorry, no guilt there… we even covered “Hold On We’re Going Home” once. Because, why not?

What movies have you seen recently that you would recommend checking out?
Haven’t watched a lot of film recently, but Beyonce’s “Lemonade” was incredible and brought me to tears. She’s as good as they get in this industry, and I love that she’s getting political.

Thanks for listening, and we hope you love “Birdhaus”! It was hella fun to make… see you at a tour date somewhere soon.