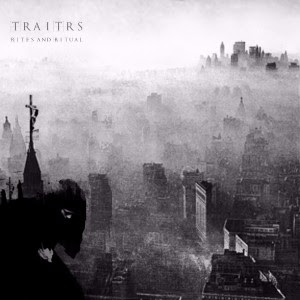 Toronto-based post punk/goth band, Traitrs, is releasing their debut EP, Rites & Ritual, today on Pleasance Records.  Band mates Sean-Patrick Nolan and Shawn Tucker created the songs with the help of Toronto producer, Josh Korody.  The EP was heavily influenced by Tucker’s bad accident that left him bed-ridden and heavily sedated with broken ribs.  “It kind of broke me physically and mentally“, which lead to the lyrics being littered with occult madness, sacrifices, witchcraft and death, among other dark topics.

“Witch Trials” was the EP’s first single, and really set the tone of the album, Nolan and Tucker explained.  Many of the EP’s songs have a similar feel to this single – which include rapid/forceful guitar sounds with heavy reverb; rich/layered synth; pulsating/tribal-sounding drums with haunting/emotive vocals.  The lyrics are dark and introspective.  Influences of the goth greats like Bauhaus and The Cure can be heard in the songs.

The album is impecable from start to finish.  While post-punk/goth music is not one of my usual genres to listen to, after experiencing Rites & Ritual, I was inspired to seek out more to add to my playlist. Pick up yourself a copy today!