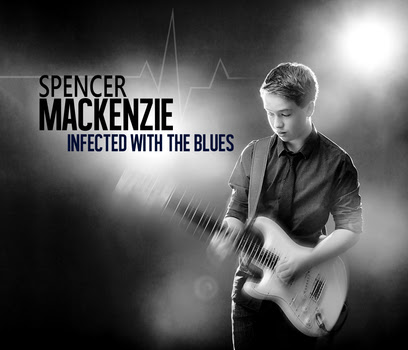 Spencer Mackenzie has been winning awards since 2013, and has also performed with many a musical icon including Jack de Keyzer. That is saying something as this guitar virtuoso is only 16 years old.

His first album Infected with the blues gives us 8 tracks, 3 originals and 5 covers. This Blues album opens with a rocking original “Infected with the blues”, a tune Stevie Ray Vaughan would have been proud to record. You can hear his youth in his singing but his guitar playing is as seasoned as his idols S.R.V and B.B. King. Another original is “Devil under her skin”.  This tune is dripping with Mississippi river blues, sweet vocals and a lyrical understanding of love’s pain.

The 1953 Memphis Minnie’s “Kissing in the dark” is a fine country edged cover. “Goodbye Lucile”- A tribute to B.B. King is very much like The thrill is gone with its slow tempo and string plucking style that was all B.B. It is easily one of the best tribute songs to any artist I have heard.

“Jumping from six to six” is a fine be-bop music cover. “Sinners prayer” is also a fine cover tune.

A nice finish to the album is his version of bob Dylan’s “All along the watchtower” which he does in a 60s pop rock sound that works with his young voice. Infected with the blues is a very strong first album. For me the best tunes are his originals.