By Remington Fioraso on June 21, 2016@https://twitter.com/RemingtonFD 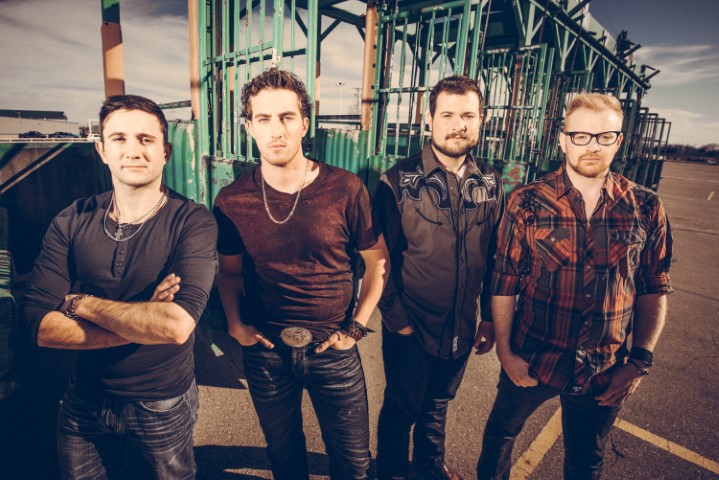 Saskatoon-based country/rock group Aces Wyld recently released their single “Roll Like a Banjo” to iTunes with its accompanying music video on Youtube.  Continue reading to find out more about the band and “Roll Like a Banjo.”

Can you introduce yourself to Canadian Beats readers?

We are Aces Wyld, a Canadian country-rock band from Saskatoon, Saskatchewan. We’re finishing up a six-song EP to be released in Fall of 2016, followed by a Western Canadian tour. Steve Andrew, Brett Browatzke, Sam Derbawka, and Malcolm Whyte make up the band.

Why did you choose the name “Aces Wyld” for your group?

We wanted to do something different but have it tied to our roots. We picked Aces Wyld because there are four of us with unique personalities that make up the band, just like there are four different suits of Aces in a deck of cards. There are country music venues along Idylwyld Drive in Saskatoon which is where we played some of our first shows, so the name represents us and it’s a tribute to our hometown.

We really like Brad Paisley, Eric Church, Zac Brown Band, Nitty Gritty Dirt Band, and Alabama. The last few songs we’ve been writing have had a lot of classic rock influences like Bruce Springsteen and Bryan Adams. Our musical backgrounds are very diverse and add different variety to our music.

Whom, or what, are your inspirations when writing songs?

It comes from real life experiences such as relationships, family, and parties with friends. Easy living Saskatchewan life in small towns is also an inspiration and shows up in much of our songwriting.

What led you to choosing “Roll Like a Banjo” as your new single?

We brought it to a few different producers and it was a favourite pick out of the songs that we had.

Can you tell us a bit more on the background of the song?  What inspired it?  How was the writing process?

Steve: I wrote this song on the way home from a date with my girlfriend. I was very happy, I heard a song on the radio with a kind of rolling banjo and it got me in this serious groove. So when I got home, I picked up my guitar and the song almost wrote itself.

The teamwork involved in the whole set up made it a great experience. Being in a band with 4 members we were able to set ups 3 different locations and shoot a full video in the span of 14 hours. The sense of accomplishment when viewing the final product was fulfilling. It’s quite something to record the song, but another thing to see all the work come together in a final product. All of our friends and fans that came out probably drank to close 200 beers that day.

The video has reached close to 20,000 people through Facebook and YouTube so far, and our song jumped 51 spots on the Canadian Country charts from 167 to 116 in the second week.

What is next in store for Aces Wyld?

We have multiple high profile shows this year including opening for country legend Marty Stuart. And of course gearing up to release the EP. There is so much to do to prepare!

In traditional Canadian Beats fashion, here are some fun questions to help fans to get to know you a bit more.

Who are your favourite Canadian recording artists?

Sam: This Side by Nickel Creek.

Steve: The End by Linkin Park.

Malcolm: Waking Up The Neighbours by Bryan Adams.

Brett: Sex in a pan

Sam: Either Nashville or northern Ukraine. My family’s from Ukraine.

Malcolm: Scotland, for my heritage. I have deep Scottish roots.

Finally, is there anything you like to say to our readers?

Thanks for taking the time to read this blog, and we would appreciate you phoning into radio and requesting our song “Roll Like A Banjo.”  Go check us out at www.aceswlyd.com or on Facebook and watch for more content from us over the summer!