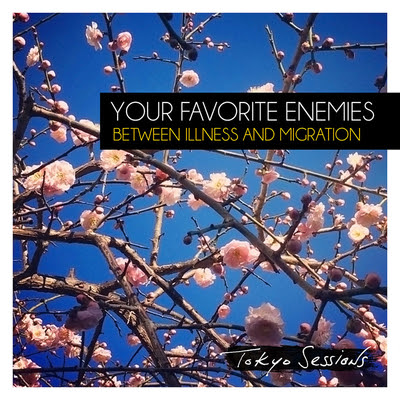 Montreal, Quebec-based alternative rock band Your Favorite Enemies, is releasing their newest album entitled Between Illness and Migration: Tokyo Sessions on June 17. Your Favorite Enemies consists of Alex (lead singer), Miss Isabel (keyboards), Jeff (rhythm guitar), Sef (lead guitar), Ben (bass) and Moose (drums). The band was formed in 2008 and has been working hard to define who they are in the music industry. They have generated a lot of popularity for themselves, from being signed to a label to selling 300,000 copies of their first album..

Tokyo Sessions features 16 tracks, all with their own style. The song that first caught my attention was the second song “Empire of Sorrows.” It’s a very good song that displays the band’s rock style of music. This song has a dark twist to it that makes it quite compelling to listen to. Hearing all the different guitar riffs to make it that way is a refreshing change to the regular stuff heard on the radio. The other song that captured my interest was “Muets aux Temps des Amours” which is the eleventh song on the album. This song has a slower pace compared to the others on the album, but it speeds up as the song progresses. The story behind the lyrics is interesting and will keep you captivated; it is a raw and emotional type song. Overall, the album was good and really well put together, creating a mix of songs that displays what the band is about and their love for creating music.

If you are looking for something new to listen to, Your Favorite Enemies is definitely the band that I would recommend.