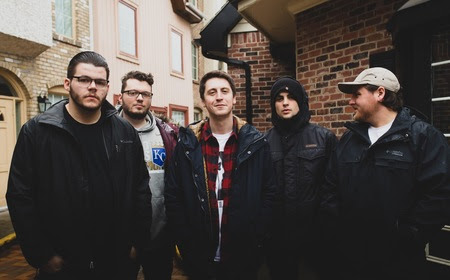 Coldfront are a pop punk group from Oakville. Set to release their third EP, Is This Where They Found You? on July 8th and head out on a cross Canada tour just before, Canadian Beats caught up with the band to ask them out the new EP and what’s to come for the band.

Can you introduce yourself for the readers who may not be familiar with you?

I’m Michael and I play drums in the band Coldfront.

Vans Warped Tour is what most bands like yours dream to play, but your first show was actually at the 2013 Warped Tour date. How did that happen? What was it like?

Chris and I’s old band had played the Toronto date of the festival in the year prior so I was familiar with the production manager on the local stage. I was actually a bit too late contacting her to get us on right away but she said that if anything were to change she’d let me know. Lucky for us, something did change and a friend of Erik’s was running a competition to play with another company. He put our name into the mix of winners and when the production manager saw it we had a slot on the show.

We couldn’t have asked for a cooler first show to play. Hardly anyone new that we existed and we pretty much played to no one but it didn’t matter. We had a blast and it gave us something more to stride for. It’s still a dream of ours to spend a whole summer on the warped tour and we’re working towards that now.

Is This Where They Found You? is set to release on July 8th. As this is your third EP since 2013, how do you think this EP differs from the previous releases?

We took a lot more time preparing and putting this one together. This is the first time we did preproduction work before going into recording. For the first two EPs we just went in with the songs you hear on the albums and recorded them. For this one, we recorded demos, reworked certain parts, dropped some songs, added others and came out with the EP you’ll hear onJuly 8th. I’m confident saying that it’s our best release yet. All that being said, it still sounds like Coldfront and we’re still a pop punk band. I think anyone who liked us before will be happy with what they hear.

Is there any reason why all of your releases have only been EP’s?

Ya, haha – money. Recording isn’t cheap and all three EPs have been recorded on our own dime. We were all in college or university during the first few years of this band and like most students, we didn’t have a ton of spare cash.

I’m sure you’re focused on this new release for now but is there any future plans for a full length album?

‘Is This Where They Found You?’ has been done for a long time actually and while we are excited for it to be released. Our focus right now is on our debut full length. I can’t say exactly when it will be released yet but that is what we’re currently working on.

On July 2nd you start a Canadian tour with Seaway and Rarity, and all three bands are from the same area of Ontario, did you know each other before this tour?

Yeah of course. We grew up with the guys in Seaway. Jared and Tom went to high school with them and we all went to shows together almost every weekend as young kids in the music scene. We met the Rarity guys more recently but we’ve been playing shows with them for a few years now and I’m stoked to get to spend more time with them. This is going to be a really fun tour.

What are you most excited to see across Canada?

Hands down. We love it out west. The routing on this tour lets us spend a couple extra days in the mountains around our Vancouver show and we intend to take full advantage of it.

Are there any tracks from Is This Where They Found You? that you’re really excited to play live?

Haha well all of them really. There’s one song called ‘Reduced’ that’s a bit heavier than the rest and has this dark energy to it that just gets me stoked every time we play it. I’d say that’s the one I’m most excited about.

Where do you hope to see the band in 5 years?

I hope that in 5 years we’ll have built the band up in to a career. One where Coldfront is our main source of income and we don’t need to worry about working other jobs between tours. Anything beyond that will just be a bonus because we really do this for fun.

We were able to have Ben from the band Such Gold come in and do a guest vocal part on a song on our new EP. That was really cool because they are one of my favourite bands. For our next record it would be cool to do a couple more vocal features like that. I love Jordan from Like Pacific’s voice so it’d be nice to get him on it.

Sum 41 & Boys Night Out are two of my all-time favourites both making comebacks right now.

Like Pacific & Safe To Say are both great bands from Toronto who are going to blow up after spending this summer on Warped Tour.

And I also really love Drake and Justin Bieber, for real. Views and Purpose are great records.