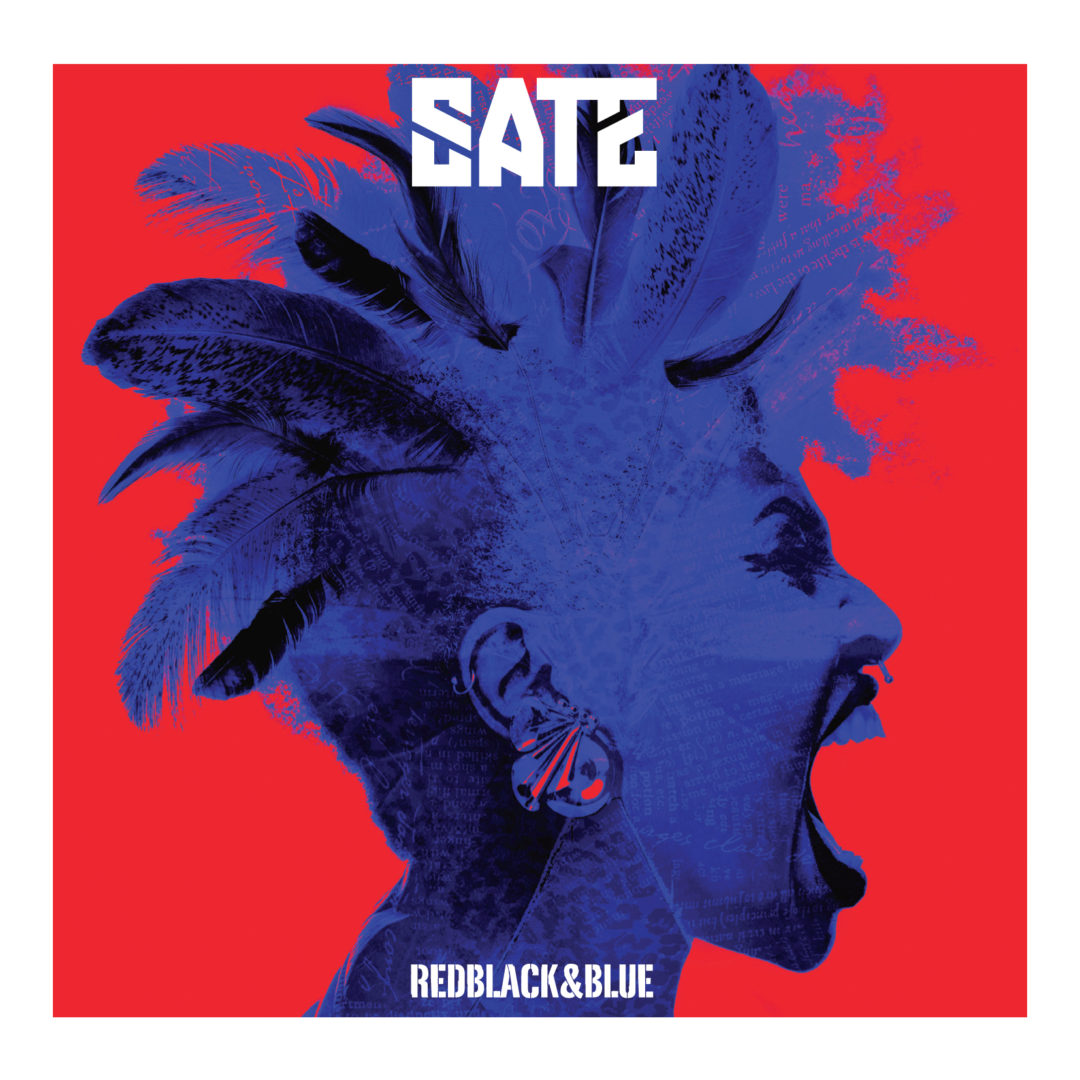 Good day sir!  How is life on the rock and roll island I am sure you are rule as dictator?  Did the Smugglers’ ever repay you for your pants, or just pay tribute to them in song?

I am writing to tell you about the discovery of your female musical counterpoint.  I am confident she is actually the female version of you from an alternate universe and, somehow, the two of you are existing in the same physical plane.  Her name is SATE and her new album, RedBlack&Blue, is a massive hard-hitting rock, blues, jazz, soul, Afropunk influenced album with as much bravado as….well… a Danko Jones album.  Allow me to explain.

The opening track “Warrior” kicks off with a high energy, gritty, riff rock anthem complete with powerhouse lead vocals, falsetto sing along background vocals, heavy guitars, crazy drum-fills, huge bass sound, effected vocal percussion and an explicit deleted vocabulary for extra attitude.  Every instrument on this track (and yes, the voice is an instrument) locks in like a jet fighter laser targeting system to demolish anything in its wake.  During the emerging rock and roll destruction, each player has a chance to shine with fills and riffs and big-produced madness.  “Warrior” shoots your plane out of the air only allowing you to catch your breath as you parachute down before the next song starts.

“What Did I Do” starts off with moody, solo blues guitar and a hugely soulful vocal line, with expression to take down any jazz purist, opening up into a driving Death meets the Headstones playing in a blues club evoking Robert Johnson and the “woke up this morning” line of any classic blues tune.  The chorus grooves out into a solid, sing along rock melody complete with a Big Sugar “Drive Like Hell” guitar riff.  Soaring soul and blues influenced vocals propel the driving force of tight guitars and splashing cymbals.

The vibe of intimidating vocals, standoffish guitars, fuzzed-fat bass, and rumble-tough drums continues through “Live on Your Love”,  “Know My Name”, “Talk to Me” and “Silence” displaying the consistency of style and differing creative choice; the sound is established but not repetitive.  “Know My Name” has an opening riff that would Montreal’s classic Deja Voodoo proud.  Elements of Living Colour shine through in musical grit and technical solidness. Lyrically there is angst, anguish, attitude and a self-assured confidence of facing, struggling and defeating life’s attacks.   “Silence” is a great mix of punk angst and pop delivery with a unison lick that should be on the next edition of Rock Band.

“The Answer” is the album’s first foray into a ballad, an emotional, understated opening with vocals and piano.  The slow jam remains, but the pace changes with intensifying instrumental parts and a big, rock sound.  The arrangement of “The Answer” builds as each section layers on top of the last, building intensity and emotional appeal.  “Try” continues the slow tempo format but with a greater rock feel and a slight 1950s style; imagine if Aretha Franklin was fronting a 90s hard rock band playing a Shangri-Las cover.

“Feel” has the one of the best use of finger snaps and hand claps ever on any album.  Tough groove, yes.  Rhythmic vocals, yes.  Best hand claps and snaps ever, yes.  Tina Turner fronting later years Bad Brains all over this track.

A whirling Leslie speaker opens the closing track “Peace” with a gospel delivered “Peace hear me / Peace feel me / Give peace to all the ones I love” transitioning into a dramatic, half time ending.  The lyrics become a mantra, pleading for peace’s guidance and delivery.  A powerful closer for a massive album.

Here’s the line-up:  SATE (lead vocals), Danko Jones (vocals and guitar), Big Sugar’s Gordie Johnson (bass and vocals), blues rock extraordinaire Megan Lane (guitars and vocals), the Belladonnas and the Temps’ punk noir vocalist Zelda Belladonna (guitar and vocals) and Age of Electric’s Kurt Dahle (drums).  This combination would create the biggest vocal and guitar sound imaginable.  Each one of you would bring your own reminiscent take on your respective genre sounds.  Get on it, sir, it would be brilliant!

Oh, and have Hawksley Workman produce the album with guest appearances by K’Naan and / or Classified.

If you are in the Toronto area, her release album show is June 16th at the Bovine Sex Club.  Check this vocal force of nature out for yourself and prepare for an amazing show!

Hope all is well with you and your Cadillac!