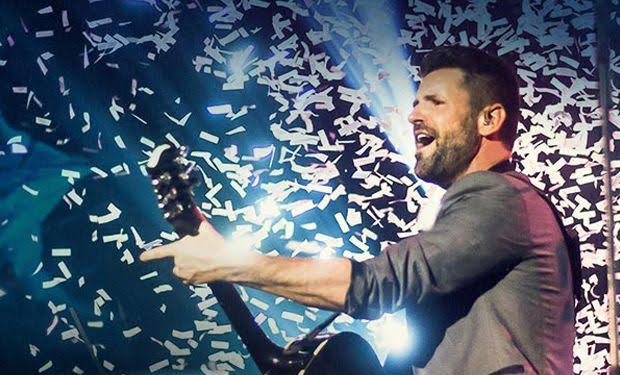 Dupré has been a judge on the hit TV show La Voix (The Voice) for the past four seasons and has coached and mentored Couture, Duquette, Gaudreault, Bazinet (Winner Season 3), Pedneault, and Leclerc. Dupré has released five studio albums including his most recent release; Là dans ma tête (December 1st 2014).

Gaudreault, Duquette, and Couture took turns to warm up the audience before Dupré took the stage. Gaudreault performed “Placebo” and “Éclat” from her self-titled release, Alexe Gaudreault (May 20th 2016). Duquette performed “On n’se dit pas qu’on s’aime” and “Pourquoi c’est toi” from her debut album, Ton problème (October 16th 2015). Couture performed both  “Comme on attend le printemps” and “Goodbye Girl” from his self-titled debut album, Jérôme Couture (April 29th 2014) as well as the lead single from his second album (TBA) “My Sweetest Thing” due out later this fall. All three are La Voix alumni from season one’s #EquipeMarc (#TeamMarc).

Known for his impersonations and comedic performing style, Dupré explained how he watched Bryan Adams in concert perform to people in his audience before performing his own renditions of “Heaven” and “Summer of ‘69.” Joined by his young daughter, (Stella) Dupré the two performed Adele’s “Rolling in the Deep” and A Great Big World’s “Say Something.” (Stella) Dupré impressed the crowd with her strong vocals. Watching the two perform, you could tell how special it was to stand on stage and perform their duets in front of 12,000 plus fans.

Bazinet who was part of #EquipeMarc and the winner of La Voix season 3 joined Dupré to perform “Jusqu’où tu m’aimes” from his album Talk To Me(November 13th 2015). Marie-Mai and Dupré performed an absolutely stunning version of Cyndi Lauper’s hit “Time After Time,” before singing “Il n’est jamais trop tard” which Marie-Mai previously recorded with Jonas. Next up on Dupré’s busy roster, Moffatt joined him on stage to perform Coldplay’s “Adventure of a Lifetime” and “Miami.”

Couture returned to perform a high intensity rendition of Bruno Mars’ “UpTown Funk” before handing the stage over to La Voix finalist Leclerc to perform her version of Lara Fabian’s “Je suis malade.” Pedneault took the lead on performing Queen’s classic, “Somebody to Love” bringing down the house with his powerful vocals. The evening ended with Dupré and his guest performing the title track from his 2013 release, “Nous Sommes les Mêmes.”

Dupré is a seasoned and energetic performer in both English and his native French language. From opening shows for Celine Dion to headlining the 28th annual FrancoFolies de Montréal festival at the Bell Centre, Dupré has come a long way. Dupré is planning on a busy summer before returning as a coach on season 5 of La Voix this winter.